All you need to know about Alternative Dispute Resolution. 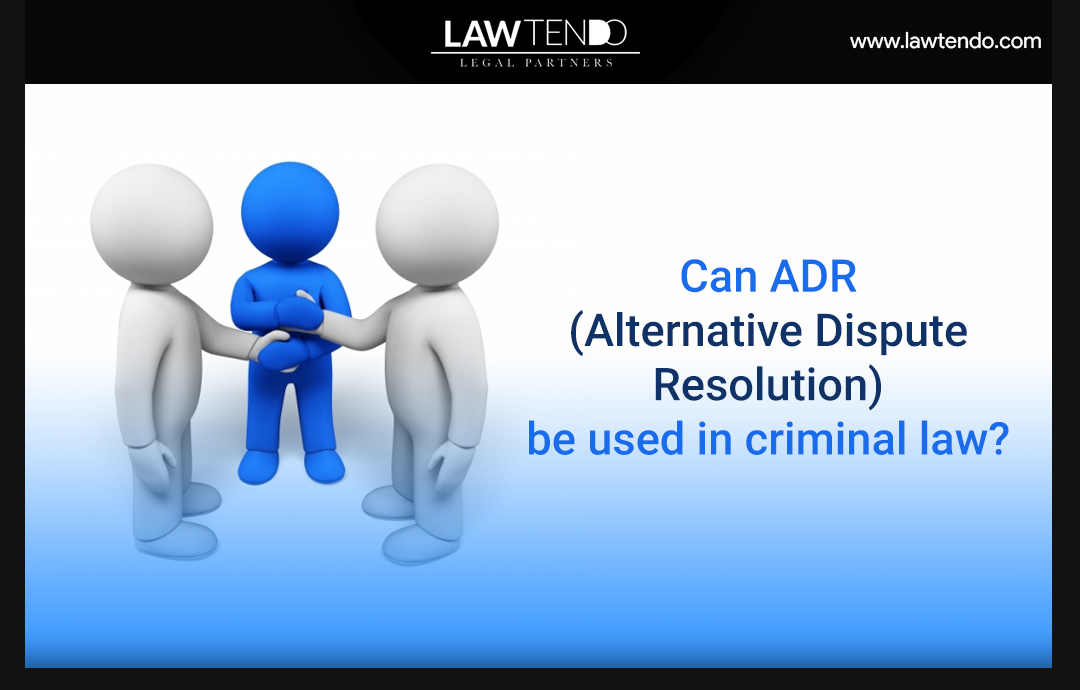 All you need to know about Alternative Dispute Resolution.

Alternative Dispute Resolution (ADR) is the procedure for settling disputes without litigation, such as arbitration, mediation, or negotiation. ADR procedures are usually less costly and more expeditious. They are increasingly being utilized in disputes that would otherwise result in litigation, including high-profile labor disputes, divorce actions, and personal injury claims.

Who can help you with this? Lawtendo. Visit www.lawtendo.com now.

Indian judiciary is one of the oldest judicial system, a world-renowned fact but nowadays it is also well-known fact that Indian judiciary is becoming inefficient to deal with pending cases, Indian courts are clogged with long unsettled cases. The scenario is that even after setting up more than a thousand fast track Courts that already settled millions of cases the problem is far from being solved as pending cases are still piling up.
To deal with such a situation Alternative Dispute Resolution (ADR) can be helpful mechanism, it resolves conflict in a peaceful manner where the outcome is accepted by both the parties.
One of the primary reasons parties may prefer ADR proceedings is that, unlike adversarial litigation, ADR procedures are often collaborative and allow the parties to understand each other's positions. ADR also allows the parties to come up with more creative solutions that a court may not be legally allowed to impose.

Even though Alternative Dispute Resolution is intended to reduce the costs, stress, and formality associated with going to court, many parties still hire attorneys to represent them at ADR proceedings. They also seek out pre-proceeding consultations about possible solutions or strategies. Just as with any legal dispute, you should hire an attorney with experience in your particular legal issue who also is familiar with the collaborative process of ADR.

ADR often saves money and speeds settlement.  In ADR processes such as mediation, parties play an important role in resolving their own disputes. This often results in creative solutions, longer-lasting outcomes, greater satisfaction, and improved relationships.

Adjudication - the competitive presentation of evidence to a judge that results in an order, judgment or decree (win/lose decision). The decision-maker is selected by the community and rules according to community legal standards. There are formal rules of procedure and evidence. The judge's decision is appealable.

Consensual Processes
Ombudsperson - An official appointed by and paid for by an institution, who investigates problems, seeks to prevent conflict and assists to resolve disputes. The ombudsperson is not a true mediator due to the institutional affiliation which, to some extent, compromises his or her impartiality and neutrality.

Mixed Processes
Med-Rec - Mediation-Recommendation begins as mediation, but, if the parties do not come to agreement, the mediator makes a recommendation to the court or other decision-maker as to a recommended resolution.

There are a lot of different types of alternative dispute resolution (ADR), and sometimes different names are used for similar processes. This can be confusing, but remember that it does not really matter what the process is called as long as it helps to sort out the problem in an appropriate way.

Some common types of ADR include:
Mediation- Mediation is an Alternative Dispute resolution where a third neutral party aims to assist two or more disputants in reaching agreement. It is an easy and uncomplicated party centered negotiation process where third party acts as a mediator to resolve dispute amicably by using appropriate communication and negotiation techniques.  This process is totally controlled by the parties. Mediator’s work is just to facilitate the parties to reach settlement of their dispute. Mediator doesn’t impose his views and make no decision about what a fair settlement should be.

Conciliation- Conciliation is a form of arbitration but it is less formal in nature. It is the process of facilitating an amicable resolution between the parties, whereby the parties to the dispute use conciliator who meets with the parties separately to settle their dispute. Conciliator meet separately to lower the tension between parties, improving communication, interpreting issue to bring about a negotiated settlement  There is no need of prior agreement and cannot be forced on party who is not intending for conciliation. It is different from arbitration in that way.

Arbitration- In this technique of resolution parties refer their dispute to one or more persons called arbitrators. Decision of arbitrator is bound on parties and their decision is called ‘Award’. The object of Arbitration is to obtain fair settlement of dispute outside of court without necessary delay and expense.

-Section 89 of the Civil Procedure Code, 1908 provides that opportunity to the people, if it appears to court there exist elements of settlement outside the court then court formulate the terms of the possible settlement and refer the same for: Arbitration, Conciliation, Mediation or Lok Adalat.

-The Acts which deals with Alternative Dispute Resolution are Arbitration and Conciliation Act, 1996 and,

Lawtendo offers 10,000 lawyers in their network base spread over 60+ cities, Lawtendo is one of the growing and leading platforms of help and legal solutions. You can consult the lawyer online and also ask legal advice online. Lawtendo lets you find the lawyer anywhere in India online.
Visit www.lawtendo.com.