All you need to know about Maternity Benefit Act 1961 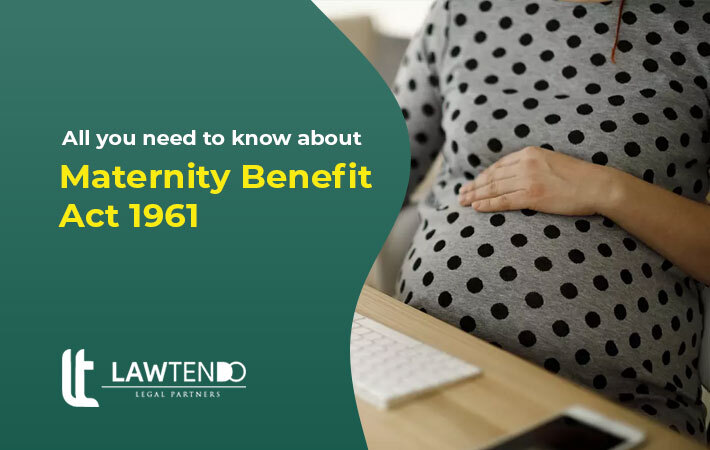 The term ‘Maternity’ means something which is natural and divine in nature. Still, there are vast varieties of problems which women have to face at the workplace at the time one thinks of embracing it. In an attempt to remove such problems and discrimination faced by women and to encourage gender parity in the country, Maternity Benefit Act, 1961 was legislated by the Parliament on 12th December 1961.

Maternity Benefit Act, 1961 aims to protect the employment of the women when she embraces maternity and provides them ‘maternity benefit’. Maternity benefit implies - full paid absence from work during the time of maternity to take care of herself as well as the child. This applies to all organisations which employ more than 10 employees.

The objective of the Act is to honour and protect the dignity of motherhood and the divine act of giving birth to a new life. This Act provides the utmost care and respect to the new person’s birth by providing for full and healthy maintenance for the woman and her child at the time when she is not working. The Act is aimed to ensure the health of the women and children pursuant to giving birth.

Applicability of the Act

This Act applies to any woman who has been working as an employee in an establishment for a period of at least 80 days within the past 12 months.

Benefits under the Act after Maternity Benefit (Amendment) Act 2017

Notice of claim for maternity benefit/payment

The women claiming the benefit under the Act must send a notice to the employer informing about her availing maternity benefit claims. If the woman is already pregnant, the notice must state the date from which she will be absent from work. The same can be done after the date of the delivery, if not sent before.

Rights against dismissal during maternity leave

It has been observed that employers have adopted the process of dismissing the services of an expectant woman employee either prior to availing the maternity leave or during the leave- this is strictly prohibited under Section 12 of the Act. It clearly restricts the employer from the dismissal of a woman during absence or pregnancy or to give notice of termination of her services during or on account of such absence. Any woman deprived of maternity benefit or medical bonus or discharged or dismissed during her absence from work may within 60 days from the date on which order of such discharge or dismissal is communicated to her, appeal to such authority as may be prescribed. No deduction from the normal and usual daily wages shall be made by reason only of the nature of work assigned to her and on account of breaks for nursing the child allowed to her.

Under the Act, the aggrieved woman can take action within one year from the date on which the offence is alleged to have been committed. Section 17 and 21 lay down the appropriate remedy and action that can be taken by the woman against the violations of the Act.

If a woman after she has obtained permission from her employer to abstain from work, works in any other establishment for a period during such permitted absence, she will forfeit her claim to the maternity benefit for such period.

Indian constitution mandates equality along with taking affirmative steps for the upliftment of the women and children under Article 15 (3). The following are the Fundamental rights provided in the constitution for the betterment of women:

Directive Principles of State Policy in this regard are :

Although Directive principles of state policy are not enforceable by a court of law, they hold fundamental importance in the governance of the country and it shall be the duty of the State to apply these principles in lawmaking. Courts have also applied these in many important matters to give full effect to the intention of the constitution-makers for the progress of the society and for doing justice.

Air India vs Nargesh Meerza (AIR 1981 SC 1829) the Supreme Court decided when the petitioner challenged the validity of the regulations under which they could be retired at the age of 35 years or if they got married within 4 years of their service or on first pregnancy that the termination of the service on pregnancy was arbitrary and unreasonable and clearly violative of fundamental rights under Articles 14, 15 and 16. The Supreme Court struck down the Air India and Indian Airlines Regulations on the age of the retirement and pregnancy bar on the services of the Air hostesses as unconstitutional. Held that having taken in service and after having utilized her services for 4 years to terminate her service if she becomes pregnant amounted to compelling the poor air hostess not to have children thus interfered with the ordinary course of human nature.

Municipal Corporation of Delhi vs Female Workers (Muster Roll) and Ors (S.L.P. (C) No. 12797 of 1998 Decided On 08.03.2000): It was held by the Supreme Court that the female workers working on Muster Roll/ ad-hoc/contractual basis should be given all the benefits under the Act.

Anshu Rani vs State of UP, (decided on 19 April 2019):  Allahabad High Court decided that there cannot be any curtailment of maternity leave period as prescribed under the Act and it is the woman's rights to get six months maternity leave.

Manisha Priyadarshini vs Aurobindo College-Evening & Ors decided on 01 May 2020, the Delhi High Court quashed the termination order issued by the college in a matter related with an issue of non-renewal of the contract of the Appellant who was on maternity leave and whose contract expired during Covid-19 and directed the college to appoint the appellant/petitioner to the post of Assistant Professor in the English Department on an ad-hoc basis until the vacant positions are filled by regular appointments.

The policy brought forth by the new provisions of the maternity leave of 26 weeks by the government is in the right direction but it has a tendency of enhancing the discrimination between men and women further at the hands of employers at the time of hiring employees. It would increase the ex-ante discrimination against women at the workplace. Further, the creche facility provision requires extra capital which the employers would find difficult.

Also, the employer would have to bear the cost of having to get the work done by a temporary employee hired for doing the work of the absent employee.

Employers remain hesitant to hire women in jobs which require frequent travelling because of the additional cost of providing security.

Teamlease Services have found that owing to the changes brought by the Maternity Benefit  (Amendment) Act 2017,  1.1 -1.8 million women have lost their jobs in 2018-19 across 10 major sectors.

Though the provisions of the Act are meant to provide better and enhanced benefits to the women workforce, it still needs to be seen how effectively and efficiently these provisions are carried out. The recent experiences and data have shown the increase in the risk of keeping women out of the workforce. The sound argument that - workplaces need to accommodate for the biological differences between coworkers, needs to be supported more by the employers as well as the society.