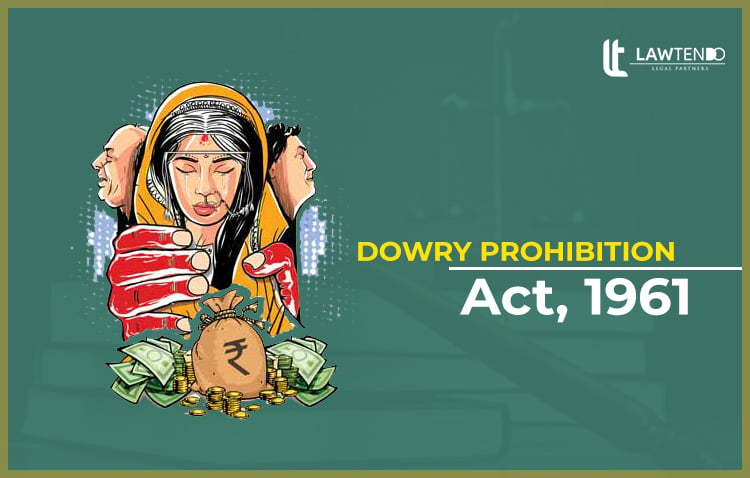 The term 'Dowry' means any property (movable or immovable), valuable assets (cash, jewellery) etc given or agreed to be given directly or indirectly by one party to a marriage (parents, relatives etc ) to other parties to the marriage. The property or asset demanded must be given in connection to marriage.

Who would be an offender under the law?

According to section 3 of the Dowry Prohibition Act, 1961, it is an offence to both who take dowry and give dowry. So the family of the bride and groom would be liable for taking and giving the dowry.

Penalty for giving or taking dowry (Section 3, Dowry Prohibition Act, 1961)- The penalty for such a person is imprisonment of a term not less than 5years and fine not less than 15 thousand rupees.

Penalty for demanding dowry (Section 3, Dowry Prohibition Act, 1961)- The penalty for such a person is imprisonment not less than 6 months and fine not less than 10 thousand rupees.

Who has the power to decide on the legal matter related to dowry under this Act?

Generally, the Metropolitan Magistrate or the Judicial Magistrate of the first class has the power to decide on the matters related to dowry under this act. The offence committed under this act is Non-Bailable and Non-Compoundable.

What are the other provisions related to dowry in law other than this Act?

Section 304B of Indian Penal Code, 1860 deals with Dowry Death, it states that “If the death of a woman is caused due to any burns or bodily injuries within 7 years of marriage and it is shown that before her death she was subjected to cruelty or harassment by the hands of her husband or his relatives in connection to the demand of dowry, then such death is known as dowry death. The punishment of dowry death is imprisonment of 7 years which may extend to life imprisonment”.

Section 113B of Evidence Act, 1872 deals with Presumption as to dowry death – If the question is whether a person has committed a dowry death of a woman and it is shown that before her death she was subjected to cruelty and harassment by the hands of her husband or his relatives in connection to dowry demand, then the court shall presume that such person has caused the dowry death.

Misuse of dowry laws by women

A coin always has two sides or two faces and similarly, each law has its own use as well as own misuse. The anti-dowry laws have been proved to be a remedy for women at the same time or moment they have also proved to be a nuisance for men/husband. All the dowry cases filed by women are not always true and in more than 40% cases filed, it has been found that the allegations made by women are false.

A recent two-judge bench of the Supreme Court mainly headed by Justice Chandramauli Kumar Prasad passed a 21-page order where it was propounded that the easiest way to harass the husband is to get him and his relatives arrested in the jail.

As per the National Crime Records Bureau statistics, around 200,000 people, including 47,951 women, were arrested with respect to dowry offences in 2012, however, only 15% of the accused were convicted.

The practise of dowry is deeply rooted in Indian society, and it can never be completely eliminated. The main reason that this practice cannot be eliminated is the mentality, thought and mindset of Indian citizens.

This social evil can only be eliminated when people will change their minds with respect to dowry. When people might understand that demanding dowry or giving and taking dowry is like selling your daughters and sons may be from then the roots of the practice would start eroding, and the practice shall get completely eradicated but the only God knows when this period will come.

The author of this blog is Adv. Munish Malik having an experience of 5 years in handling Property-related matters from his experience he wants to share this beneficial information for the individuals having any issues with respect to Property related matters.