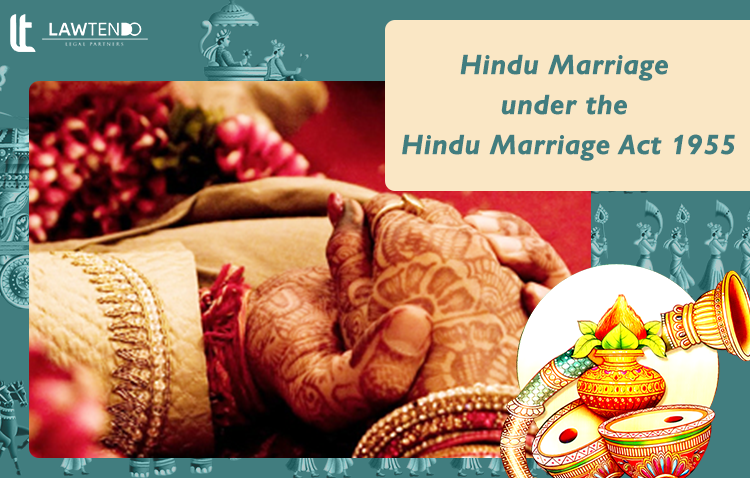 India is a country with a vast record of history. It includes the rules and rulers of diverse religious and cultural backgrounds. The customs and usages from these religions have passed down from ages and making India a land of diversity. Since people hold their religions to their hearts, India recognises these in the form of personal laws hat govern the people of that religion.

The Hindu Marriage Act, 1955 is one such legislation that recognises the conditions, ceremonies and other principles relating to marriages among Hindus. The act is divided into VI chapters covering 30 Sections. To understand anything and everything in the act, it is necessary that one knows who all are “Hindus” for the purpose of this act. Any person who is not a Muslim, Christian, Parsi or Jew shall be considered a Hindu. The first part of the act is the preliminary chapter (Sec.1- Sec.4) which explain the extent and application of this act and the definitions that relate to the terms introduced in this act. This part also establishes that any act or legislation passed before the commencement of this act with the same subject matter, this act shall have any overriding effect.

In India, Marriage is considered as a most sacred ceremony. Parties to marriage carry loads of hopes and dreams relating to their life after marriage and their happiness. Marriage is an institution in which two parties agree to be a part of each other’s lives and share responsibilities that may be financial of emotional. All the laws relating to matrimony impose such matrimonial duties and also gives certain rights to the each of them.

The Hindu law establishes certain conditions and mandatory ceremonies for a marriage to be considered a valid marriage. The need for registration of the marriage is also discussed inn this part of the act. It goes without saying that the parties to marriage need to be Hindus, however there are specific conditions established in Sec.5 of the act for a successful Hindu Marriage. These conditions include:

The act further goes on to discuss the ceremonies that must be followed in order to consider the marriage a complete marriage. The act provide liberty for the process to be in accordance to the ceremony rights of either of the parties. It also states that the with the seventh step before the holly fire (completion of Sapthpadi), the marriage shall be binding and complete.The registration of a Hindu marriage is something that has been discussed in various court cases. Since it is left to the discretion of the state to make provisions for the registrations and documents to be presented for the marriage, it has been a point of great discussion. In the case of Shiva vs. Ashwini Kumar, the Supreme court held that the registration of marriages is compulsory and it shall be considered a part of the process of completion of marriage. The provision of this act does not make it mandatory to have a marriage certificate but it is noted that a marriage certificate can be used an evidence of marriage in cases that dispute that validity of marriages (Kanagavalli vs. Saroj). There has also not been any specific requirement for the registration except that the proof of the marriage being complete as per section 7 of the act.

Understanding the concept of Void and Voidable Marriages is also a necessary part while studying marriage under the Hindu personal law. Section 11 of the act puts forth the situations in which the marriage shall be considered to be a void marriage. These are if the marriage was not a monogamy for either of the parties, or the parties were in a prohibited relationship and if the parties were sapindas of each other. Further, the conditions in which a marriage is considered voidable include impotency, pregnancy caused by a person other than parties to marriage, the marriage was caused without free consent, or the marriage occurred when the parties had not acquired the age as specified under Sec.5.

The restitution of conjugal rights is one of the remedies that is made available to aggrieved party when one of the spouses leaves from the society of the other without specifying any reason. In other words, it is a right available to the spouses to cohabitate with the other. A decree for restitution of Conjugal rights may be passed by the court in case of valid marriages only and a valid marriage we understand that the parties have by the due procedure recognised by law have agreed to stay together and share the responsibilities. The decree for restitution is a paper decree and if is not followed by the parties it may later on become a ground to hold a divorce. In Sushila Bai v. Prem Narayan the husband virtually deserted his wife and thereafter was totally insensitive towards her. This behavior was held sufficient to show that he had exited from the society of his partner, and therefore the wife’s petition for restitution of conjugal rights was permitted. The guard of this principle lies in the concept of a ‘reasonable excuse’. If the respondent has withdrawn from the society of his spouse for a valid reason, it is a complete defense to a restitution petition.

Get Advice from best Lawyer

Judicial separation is an alternate that the act provides for divorce. It provides for a couple to get a legal order from the court which permits them to stay separately. The grounds under which such a petition can be filed are similar to those in which a petition for divorce is filed. The court does however, have the power to rescind the petition if it considers it just and reasonable to not to pass such an order.

When the parties to a marriage, for some reason do not wish to live with one another, they may present a petition before the court to render the marriage ended by granting a divorce. Divorce, even though, was not a practice accepted by the Hindus in the past, was introduced as we move on with time. Hindus consider marriages to be a sacred relationship and putting an end to it does not mean good in your life. A petition for divorce an be filed before the court based on the place of solemnisation of marriage, residence of respondent or residence of both the parties.

The Hindu Marriage act has Specified grounds, based on only these grounds can a person approach the court to seek divorce. These grounds are:

Apart from the ground mentioned above, the wife has the liberty to file a petition for divorce with the extended grounds including,

Another situation for divorce is when the parties have mutually agreed to divorce i.e. divorce by mutual consent. The grounds for such a divorce are that the parties have not been living together for at least 1 year; they are unable to live together; or they have mutually agreed on getting a divorce. After the presentation of the petition, the parties are required to live together for a period of 6 months, which may extend to not more than 18 months, the court if satisfied shall grant a divorce to the parties.

In most cases of divorce, there are follow up cases relating to maintenance and custody of the child. While maintenance can be fixed at the discretion of the court and is also a right under Section125 of Cr.P.C. The custody of the child, according to the provisions of Hindu Marriage Act, the court may pass interim orders from time to time in order to favour the interest of the child. Any of the parties may also file a petition for the grant of interim maintenance while the proceedings for divorce are still pending. The party filling such a petition will have to establish that the y is facing difficulty in maintain their day to day expenses. It is then upto the discretion of the court to order the other party to pay.

Permanent Alimony is the amount that is paid to the party after the final proceeding. It can be granted in the end of the proceeding’s relation to Divorce, Dissolution of Marriage, Nullity of Marriage, Restitution of conjugal Rights and Judicial Separation. the court has the power to fix an amount that the party has to pay to another as alimony. This amount shall however be revised if there is a change in circumstance.

The decrees passed under this act shall be under the original civil jurisdiction and the appeals to these decrees shall lie with the court to which appeals ordinarily lie from decisions given by the court with original jurisdiction. Any order passed under Section 25 and Section 26, if it is not an interim order, can be appealed in the courts. An appeal against the order for cost is not allowed. It is within the period of 30.