Complete guide on marriage under the special marriage act, 1954 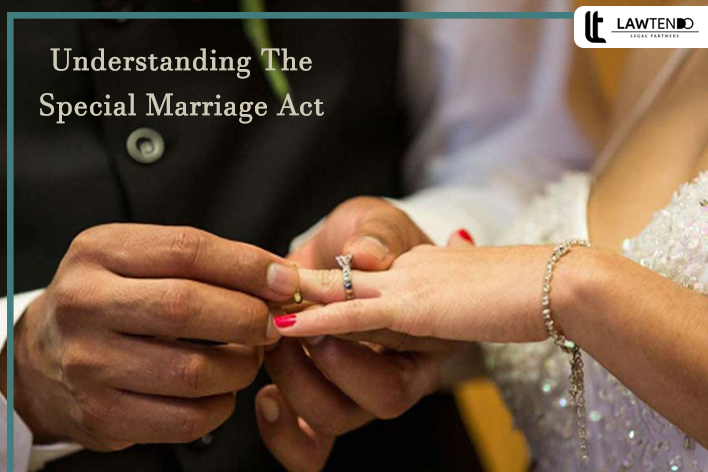 Marriage is one of the most sacred and omnipresent social institutions in India. It serves as a crucial milestone in an individual’s life that legitimizes offspring and provides an individual with emotional as well as social support.

Marriages in India are governed by various laws and custom depending upon the religion and/or sect of the parties. One of the most widely spread laws that govern marriages in India is the Special Marriage Act, 1954

The Scope and application of the Act

The Special Marriage Act was enacted in 1954 to marriage law amongst inter-caste and inter-religious couples. The act also aimed at regulating marriages and other aspects of personal life among these individuals.

The act gives meaning to key concepts like marriage, cohabiting rights, and grounds of divorce, maintenance as well as other rights, duties and obligations.

The Special Marriage Act is thus a special legislation that is enacted to provide a special form of marriage, solemnized through registration where the parties to the marriage are not required to renounce their religion.

Unlike the Hindu Marriage Act, the special marriage act extends not only to the Indian citizens belonging to different castes and religions but also to the Indian nationals living abroad.

Conditions and Requirement for a marriage under the act

Unlike the Hindu Marriage Act, the only basic requirement for a valid marriage under the special marriage act is the consent of both the parties. Thus, if both the parties are ready to marry each other; caste, religion, race, or any other classification cannot act as a hindrance to their union.

The legitimacy of Children and Succession under the Act

As per the special marriage act, any marriage which is solemnized in contravention to the conditions mentioned above is a void marriage and children begotten from such marriages shall be legitimate, irrespective of the fact that whether such child was born before or after the commencement of the Act. Thus, any child born out of a void marriage is deemed to be the legitimate child of his parents and gets all rights including rights of inheritance and succession as such a child is regarded as a legitimate child of the parents.

Provisions for Divorce and Remarriage under the Act

While marriages are considered to be sacred union, it is possible that some marriages do not work. Keeping in mind that marriage is a relationship between 2 individuals which might not work out, the special marriage act provides for various grounds of divorce available to both husband and wife that can be invoked to obtain a decree of divorce. These include:

1.Cruelty by the other party

2.Adultery by the other party

3.Desertion by the other party

4.Sentenced imprisonment of 7 or more years by the other party

5.Cruelty by the other party

6.Mental unsoundness of the other party

However, it is to be noted that under the special marriage act, no decree for divorce can be initiated within the first year of marriage.

And while you might be able to get a divorce, to remarry you must fulfil the following provision of the Act:

Thus when you receive a non-appealable decree of divorce or you have crossed the limitation period of appeal then in that case only you are eligible to remarry.

Thus the Special Marriage Act was enacted in the year 1954, to provide for a special kind of marriage to all the citizens of India and all Indian Nationals abroad irrespective of their religion. Further, under the SMA, a marriage takes place by a way of registration as provided under the act and not through religious ceremonies.

Thus marriages in India are regularized institution that legalizes wedlock and also provides for divorce remarriage, succession and legitimacy.

LawTendo has around 15000+ lawyers across India in our platform. LawTendo strives to facilitate cost-efficient and quality legal service to our clients. You can contact us at +91-9671633666 or info@lawtendo.com