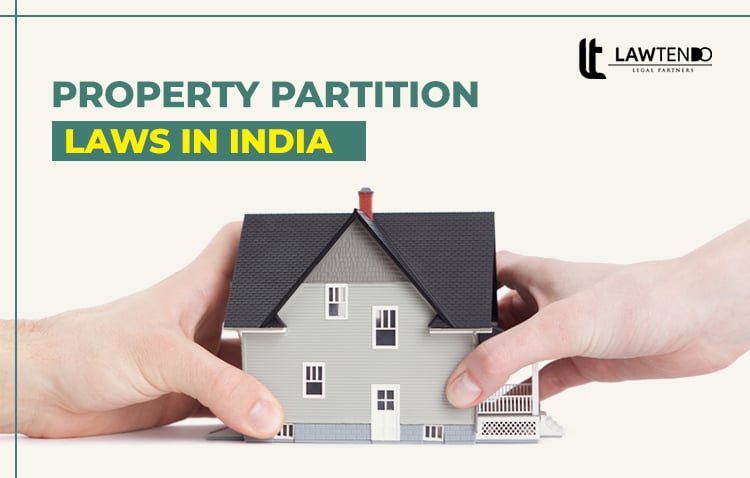 Partition is a term used in law to describe an act, by a court order or otherwise, to divide up a concurrent estate into separate portions representing the proportionate interests of the owners of property. Under the common law, any owner of the property who owns an undivided concurrent interest in the land can seek such a division. In India, partition of the property is guided by The Indian Succession Act, 1925; The Partition Act, 1893 and separate religious laws (personal laws) such as The Hindu Succession Act, 2005 and The Muslim Personal Law (Shariat) Application Act, 1937.

Properties which are capable of being partitioned are broadly of two types:

2. Ancestral property- As the name suggests, this type of property is of the forefathers which is passed on from generation-to-generation in a family. Persons who are born in that family have vested interest in this property by virtue of them being born in that family.

I. Partition by mutual arrangement

Partition by mutual agreement can be done through a family arrangement or by acquiring a partition deed.

1. Family arrangement: It is the basic form of partition where the family does not want the court to be involved and divide the property amicably through negotiations among one another. In this case, it is not mandatory to get the agreed settlement registered or to get it written as long as it satisfies all the co-owners.

2. Partition deed: the property in this case gets divided in accordance with the specific personal laws and in their absence, division happens as per the rules under The Indian Succession Act. The deed specifies certain share of each co-owner and has to be registered and executed on a stamp paper in an unambiguous manner. The deed is executed by the co-owners themselves or upon the orders of the court.

A legal notice is served upon all co-owners of the property which specifies share of each one of them. When the matter doesn’t get resolved even after serving legal notice, a suit for partition is filed in the court and this is termed as ‘partition suit’. This marks the initiation of court proceedings in respect of the property. The court then decides the share of all the co-owners. For this purpose, a court may appoint a commissioner to inspect and submit report on the property. As per The Partition Act, 1893, the court has the power to order sale of the property if it reasonably appears to the court that partition cannot happen.

As per The Limitation Act, 1963, the period of limitation to file a suit for partition is 12 years from the date the possession of the defendant becomes adverse to the plaintiff.

Probate is a copy of the will certified under the seal of the court. A probate can be granted only to the executor of the will and for that; a petition has to be filed after which the court gives public notice in any leading newspaper to invite any objection. When there is no objection, the court grants the probate. The probate is a proof of the will to be accepted as a valid legal document.

It is highlighted that the will is made in respect of self acquired property only. Ancestral properties cannot be divided as per a will.

The limitation period for filing probate petition is 3 years from the date when the cause of action accrues or the right accrues.

A Brief on Partition as per Personal Laws

This Act governs the partition of property belonging to Hindus. According to the earlier Hindu Succession Act, 1956, daughters did not have interest in the property but now they have same interest as that of the son. Also, any person who converted himself into another religion can also claim his rights in the property even after conversion. This change was bought through the Caste Disabilities Removal Act and therefore rights of such persons are now well protected although, the descendants of such person do not have right over such property unless they were Hindus at the time when succession opened.

This act applies where both the parties are Muslims. Section 2 of this Act specifically provides that matters that involve intestate succession, special property of the females, marriage, dissolution of the marriage, maintenance, dower, guardianship, gift, waqf, trust and trust properties and where both the parties are Muslims, then only Muslim Law will be applicable and nothing else and the courts are bound to apply Muslim Law only.