Contempt of Court - What does it mean and why is it in the news ? 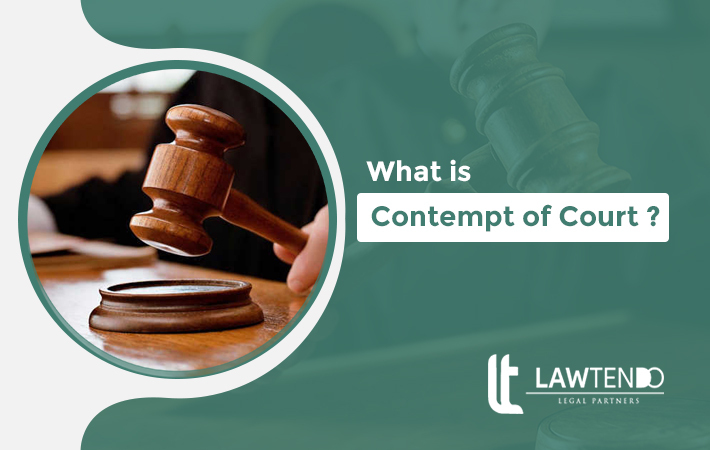 Maintenance of the rule of law is of immense importance for a democracy like ours. The Supreme Court as the protector of the constitution and the guarantor of the fundamental rights is endowed with the responsibility of doing complete justice and of proper maintenance of the judicial orders. The Supreme Court is also conferred with the status of being a court of record . Once a court is made a ‘Court of Record’ whose records are admitted to be of evidentiary value, they are not to be questioned when they are produced before the court. A court’s power to punish for its contempt necessarily follows from that position. Contempt of court is often referred to simply as "contempt", is the offence of being disobedient to a court. The sacrilegious act showed towards a court of law and its officers in the form of disobedience go against the authority, justice and dignity of the court and consequently against the constitution.

Article 129 of the Constitution confers this power on the Supreme Court. Article 129 makes the Supreme Court ‘a court of record’ conferring it with all the powers of such a court including the power to punish for its contempt. However, this extraordinary power must be sparingly exercised only where the public interest demands. A corresponding power has been conferred on the High Courts by Article 215. The Constitution empowers the superior courts to punish for their contempt. The Contempt of Court Act also empowers the High Courts to punish for the contempt of the subordinate courts.

It must be noted that despite many criticisms for its tendency for infringing Article (19) (1) (a) i.e. Right to freedom of speech and expression, contempt of court provisions hold much more relevance in our democracy for upholding the supremacy of the constitution and maintaining rule of law as this right is subject to limitations imposed under Article 19 (2) which empowers the state to put reasonable restrictions on different grounds which includes contempt of court.

As per Section 2, contempt of court includes Civil as well as Criminal contempt.  Where Civil contempt means wilful disobedience to any judgement, decree, direction, order, writ or another process of a court or wilful breach of an undertaking given to a court, the criminal contempt is much more complex. It means - publication (whether by words, spoken or written, by signs, or by visible representation, or otherwise ) of any matter or doing of any act whatsoever which

(ii) prejudices or interferes or tends to interfere with the due course of any judicial proceeding, or

(iii) interferes or tends to interfere with or obstructs or tends to obstruct, the administration of justice in any other manner.

Here is the list of the acts or publications  that do not amount to contempt:

A maximum of 6 months Simple Imprisonment or a fine of Rs 2000 or both can be imposed as a punishment in case of the conviction.

Delhi Judicial Services Association V State of Gujarat (1991) 4 SCC406- It was held by the Supreme Court that Article 129 confers power on the Supreme Court for its contempt as well as of its subordinate courts. This inherent power is necessary to safeguard and protect the subordinate judiciary which forms the very backbone of administration of justice.

In re Vinay Chandra Mishra (1995) 2 SCC 584-  It was held by the Supreme Court that the power of the court under Article 129, 215 and 142 cannot be curtailed by any statute. Neither Contempt of Courts Act nor Advocates Act can restrict the said jurisdiction. The jurisdiction of the Supreme Court under Art 129 is independent of the statutory law. The object of vesting such a power in the court was to uphold the majesty of law, the rule of law which is the foundation of a democratic society. The judiciary is the guardian of rule of law. In a democracy like ours where there is a written constitution the judiciary has a special function to perform viz. to see that all individuals and institutions including the executive and the legislative act with the framework of not only the law but also the fundamental law of the land. The duty is essential to the peaceful orderly development of society.

Need for provisions of contempt of court

The reasons why there is a need for provisions of contempt of court in India are as under:

Recently advocate and activist Prashant Bhushan, who has been accredited with a no. of important judgments has been held guilty of contempt of court for the publication of two tweets on twitter, one criticising CJI S A Bobde and the other raising questions about the conduct of the former chief justices and the court. It was held by the court that the tweets were based on distorted facts and have the effect of destabilising the foundation of Indian judiciary. The Supreme court held him guilty as his tweets lowered the authority of the Supreme Court in the public eye. However, the Supreme Court gave him an opportunity to apologise so that it could take a lenient view in the matter which he outrightly refused to tender.

On Monday i.e 31st August 2020 while pronouncing its verdict on the quantum of the sentence , the Supreme Court imposed a token fine of Re 1 on Bhushan which is to be paid by 15th September in case of default of which 3 years of ban from practice along with 3 months imprisonment will be imposed.

He has been charged for another case of contempt against him. This relates back to 2009 when in his interview with Tehelka magazine he claimed half of the past 16 CJIs were corrupt. It was brought to the attention of the court by senior advocate Harish Salve based on which contempt action was initiated against him in November 2009. Former Tehelka editor Tarun Tejpal is also a contemnor in this case .  Bhushan refused to apologise on July 24, when it was listed by the court more than eight years after it was last heard,  but offered an explanation. The three-judge bench rejected the explanation and decided to proceed in detail. However a new bench of the Supreme Court will be hearing the matter in view of the fact that presiding judge of the bench presently hearing the case, Justice Arun Mishra is retiring on September 2. This matter is now listed for 10 September 2020.

The Supreme Court or High Courts are manifestly invested with this power to enforce the rule of law under the constitution. It has been urged recently by many lawyers or jurists that the Indian democratic system is constructed on the same lines as on British, consequently, the Indian system too must take the same action in respect of the contempt of court provisions following the same track as British system. It had decriminalised the contempt of court proceeding in 2013.

It must be noted that being the largest democracy with a written constitution where the supremacy and independence of courts is of much greater importance than any other country in the world, it would be necessary that India itself must recognize what suits its vast diversity and essential features of its constitution . India must stick to its democratic values of a system which is unique in its own way . Thus right steps need to be taken in the right direction.

LawTendo has around 15000+ lawyers across India on our platform. LawTendo strives to facilitate cost-efficient and quality legal service to our clients. You can contact us at +91-9671633666 or [email protected].