Saving of the Inherent Power of the High Court - CRPC 482 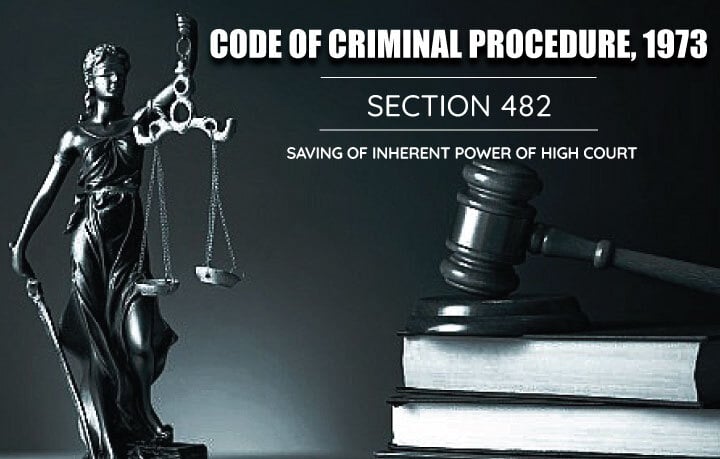 No part of this Code will be attempted to deem to restrict or in turn affect the inherent powers which are vested upon the High Court. In order to make such important orders that might be necessary to primarily give effect to any particular order which is under this Code, or to further stop or prevent the abuse of the process of any particular Court and also otherwise to secure the very ends of justice.

Bailable Offences are Offences in their entirety that can get a grant of bail, it is purely a matter of right, where the arrested person is released after the bail is granted. It may either be given by a police officer who is having custody of the accused in the course of law. But since this particular section of the Code of Criminal Procedure is primarily about saving the inherent power vested upon the High Court, it is not talking of an offence, hence cannot primarily be categorized as bailable or non-bailable.

What is the punishment for CrPC 482 Case?

This particular section of the Code of Criminal Procedure is primarily about saving the inherent power vested upon the High Court, it is not talking of an offence, hence cannot primarily be categorized to have a particular punishment.

A Cognizable offence is an offence in which, a case in which, a police officer may, under or in accordance with the law have the provision to arrest without warrant, while a non- cognizable offence is an offence wherein, the police officer responsible for that case, will have no authority to arrest the person involved without a warrant. But since this particular section of the Code of Criminal Procedure is primarily about saving the inherent power vested upon the High Court, it is not talking of an offence, hence cannot primarily be categorized as bailable or non-bailable.

State of Andhra Pradesh v. Gourishetty Mahesh: The appeal that was filed under this case by the State of Andhra Pradesh totally against the prior judgment which was passed by the High Court of Andhra Pradesh, which happened in Hyderabad, wherein the High Court went on to allow the petition filed by the other respondents. To exercise the jurisdiction under which is mentioned under Section 482 of the Code. The High Court usually does not engage in enquiring if the evidence or the question is reliable or not, or also if a reasonable amount of appreciation of the accusation was not to be sustained. This is primarily the function of the trial Judge. The Court is true in inspection and judicious to exercise the discretion and should further take all relevant circumstantial facts into consideration before issuing process or proceeding with the same, or it would only become an instrument in the hands of a private complainant to unleash their aim to harass any person without a need.

Section 482 is not a particular instrument that is handed over to some accused to particularly short-circuit a prosecution and it brings in a closure without full-fledged inquiry.

Though the High Court, in this case, may go on to imply its power related to cognizable offences to try and prevent abuse of the process of any Court or to secure the ends of justice. The powers which are vested upon the High Court as mentioned under Section 482 of the Code of Criminal Procedure have a wider spectrum, however, such an amount of power, it requires a certain amount of care and when exercised.

The interference that’s made must be based on sound principles and the inherent power rested upon the High Court should not be exercised only to stifle or jeopardize a prosecution that is legitimate. There is clarity that if these allegations were set out in the complaint and do not further constitute the offence of which, the cognizance has been taken by the Magistrate, it will be considered open to the High Court to have the choice to quash the same to exercise the inherent powers as mentioned under Section 482 of the Code.

Hamida v. Rashid: In this particular case the appeal was filed by a complainant named Hamida, who was also the widow of Balla. It was filed against the verdict passed before, and this petition under Section 482 Cr.P.C. was filed by the accused, the respondents were disposed of with certain directions. In the impugned order it was precisely directed that the accused respondents, who were granted bail initially in certain offences as given under Section 324, 325 of the Indian Penal Code, and would continue to remain on bail even after the offence was converted to Section 304 IPC, and if they went on to furnish the primary requisite, personal bonds, and sureties before the Court.

Accordingly, he also passed an order on the very same day to grant bail to the accused members, that is Rashid and Arshad. However, there was clarity in the order that if this very case was converted into a more serious offence, the accused would not get any benefit from the bail that was granted to them. The offence was further converted into one under Section 304 IPC and at this stage, the four accused went on to file a petition under section 482 of Cr.P.C. before the High Court to seek a direction to permit them to remain on the same bail even after conversion of the offence into one under Section 304 IPC. The only submission made before the Court based on the same facts and circumstances, the accused was granted bail and they had not misused any privilege regarding the framework of the bail, and so they must be allowed to remain on bail even after the conversion of this particular offence. The High Court accepted the plea which was made on behalf of the accused members. So it was considered that the very ends of justice would be better served if time as valuable as it is, especially if the Court should be spent in hearing those appeals rather than entertaining more of these petitions under Section 482 of the Code of Criminal Procedure. In the earlier stages, wherein pleas were often filed with not a very precise motive only to deceive the given procedure, as in this very case, also to delay the trial of a certain case which will enable the accused to cast a victorious outcome over the witnesses by using deceiving methods like money or muscle power or getting them to be disinterested in giving evidence, to conclude the result of failure to offer justice.