ERADICATING THE TABOO OF BEING QUIET metoomovement Sexual harassment and Abuse 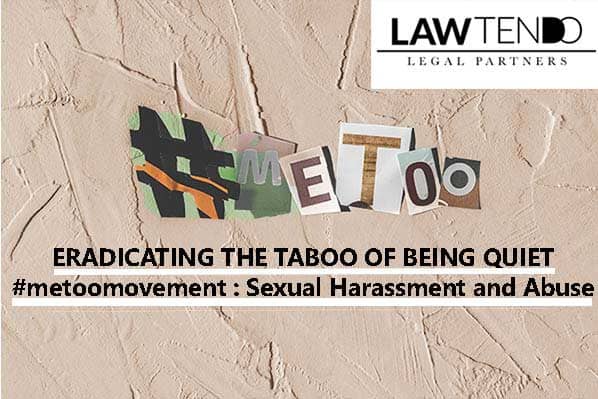 There are thousands of women who are sharing personal stories of sexual harassment under the hashtag ‘#metoo’. This me too movement firstly started in the west but now it started in India too. There are so many women as well as men who happened to be a victim of sexual harassment and abuse. Even the children are a victim of an assault. This movement became a global phenomenon.

Sexual harassment and abuse is a serious offense. Any person can be a victim of harassment including our friends, relatives, colleagues and family members so we can’t dismiss it with normal response strict action must be taken in this regard.

This moment is a revolution in itself; we got so many people proclaiming confidently that we were seeing the sunrise of the new period. This moment began on social media when one of the Hollywood actor Alyssa Milano wrote ‘’if all the women who have been sexually harassed or assaulted wrote ‘me too’ as a status, we might give people sense of the magnitude of the problem. After her status, millions of people wrote #metoo on twitter and other social networking sites.

Facebook said that within 24 hours, 4.7 million people around the world started talking about #metoo, with over 12 million post, comments, and reactions.

This movement has some positive impact on society. Millions of women who were being quiet of the assault they went through earlier. Finally because of this movement people can talk about the things they have suffered. People can help each other, they can discuss what had happened to them. This movement also brought awareness in the society, people got to know about the rights and laws related to sexual harassment and abuse. It brought justice in the eyes of society and the whole world.

This movement was a much-needed discussion, #metoo campaign report shows why people do not want to share their stories about sexual harassment, assault, and rape, to avoid embarrassment people don’t want to come in front and discuss it. Because of this movement, people got to know that victim should not be embarrassed but the person who did this should be embarrassed for their action. Morality clauses are being redefined in order to respect a Person’s dignity. Firms to have responded accordingly by letting go to the accused and helping victims. The #metoo movement has enabled people with a tool to express their pain and suffering. The organizations are now being more careful and are trying their best to create a better environment.

In spite of the fact that the rundown was heatedly debated by Indian feminists activists on its viability in doing combating the issue of sexual harassment and assaults, it opened up a door for survivors to talk about it, which has at long last prompted this flare-up of giving an account of instances of sexual harassment and misconduct at the working environment. With the women coming forward and sharing their stories as well as exposing the name of the accused will help create a safe environment and most importantly the opportunity to be heard and pursue justice.

After this me too revolution, India needs to take strict actions and also bring a long-term solution to effectively restrain the threat of harassment. As there are many solutions to overcome the hurdle the most important thing is that survivor must get the justice they deserve. For more information Login to Our Website www.lawtendo.com or Call Us: +91-9671633666