How long does it take to get the court judgment on a cheque bounce case in India? 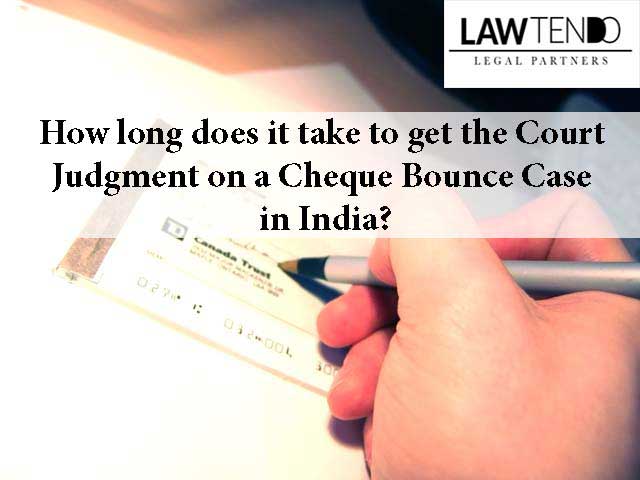 Cheque bounce is most common offense nowadays, As per section 138 of The Negotiable Instruments Act 1881 Cheque bounce is a criminal offense., The punishment as per the Section 138 of the NI Act is two years and a penalty of the amount equal to two times of the amount as mentioned on the cheque. It takes place when someone issues a cheque without having enough funds in the account, hence on presenting the Cheque it gets dishonored/ bounced.  The time period involved in the case of a cheque bounce matter depends on various factors and the whole procedure has various stages, such as,

After collecting the return memo and cheque sending a legal notice Notice with the help of a lawyer is the first step one has to take to begin the legal recourse. A legal Notice has to be issued within one month of the date of return memo of the Cheque. Notice can be served by any like Registered AD., Speed Post.  After sending the Cheque track the delivery report of the notice. After sending a legal notice one has to wait for 15 days for the reply of the legal notice.

Filing of the complaint is done in case no positive response of the legal notice is received in return of the legal notice. After filing of case Court analyses the case and issues a summons to the accused person and the person on the decided date has to appear before the Court and seek bail form the court.  After the completion of the trial, arguments are heard and the matter is disposed of and decided.

If any side is not satisfied with the decision was given by the magistrate one can file an appeal before the session court within a prescribed time limit of 1 month from the date of the decision of the court and later after the disposal of the appeal, revision can be moved before the Hon’ble High Court.

The cheque bounce case is an evidence-based case, and in case a person pleads guilty, then There is no scope for cross-examination and unlike the normal case will be decided fast, though it also depends on a number of cases pending before the court. Huge a number of cases are pending in all courts. In case the accused person and the complainant attend every date before the court  - then a can be disposed of in around 2 -3 years.

But Sometimes due to the mediation & out of court settlement case is disposed of fast.