How to Deal with False Cheque Bounce Case? 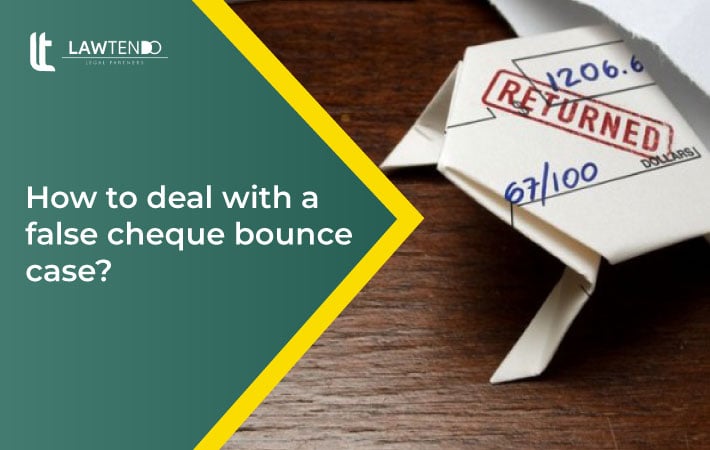 A very reputed businessman, who had established various branches of his brand in different cities across India was accused of false cheque bounce case by a bank. The amount charged on him was huge as well. But he took the right decisions quickly without wasting time thinking about how his reputation is now harmed. He collected all the apposite documents and files and contacted a lawyer to file a legal notice within the timespan of 30 days. And since it was a false allegation on him, it was not much of a task for the bank to be proven guilty.

If he would not have taken the said actions quickly and did not submit the notice on time ,i.e, within 30 days of receiving the notice from the bank, a warrant might have been issued against him and he would also have had to actually pay the amount for the false cheque bounce imputation. These accusations are generally to affect the reputation of a person and bring him down or go to jail. Although it might end up being a mistake on the banks side or the depositor of the cheque in some cases but mostly it is to bring down the prestige and position of the recipient of the cheque in the market.

Cheque: A Cheque is an important part of the financial system in various countries across the world. A cheque is regarded as an important document which can be used by an individual, company or government for transactions of various amounts. A Cheque is also termed as a negotiable document to transport money in a physical form or even to perform inter-account transfer.

Cheque Bounce: The situation of cheque bounce means that the process of depositing cheque in the bank has been unsuccessful. It might be due to several reasons:

False Cheque Bounce: Many people still prefer making their payments through cheques because of various reasons like cheques allow to make payment to people who do not have a bank account or few are not yet comfortable with net banking. But cheque bounce cases are rising in today’s time and the Indians courts are filled with these cases which are filed under Section 138 of the Negotiable Instruments Act,1881.

These cases are usually to extract money from someone or to harm and spoil his/ her reputation. However, some cheque bounce cases amongst these cases are false cases and are not genuine cases which targets some innocent people who then end up facing legal issues because they lack the knowledge on what should be done.

How would you deal with a False Cheque Bounce Case?

The victim in such cases need not worry much about it as it is a false accusation and generally easily proved with the valid documents that there was enough balance or fund in the bank account of the issuer which would ensure there was no cheque bounce.

Some important measures to take when a situation of false cheque bounce arises:

It is always a good idea to keep 2-3 copies of each document because sometimes you might have to submit the copies to the authorities dealing with the case. The process becomes quicker and hassle free when the documents are handy.

Get in touch with the best cheque bounce lawyer

This section has been very recently decriminalised. On 8 June, 2020 the Ministry of Finance proposed decriminalizing various minor offences “for improving business sentiment and unclogging court processes”, which also include Section 138 of Negotiable Instruments Act, 1881. The main purpose for decriminalising this section is to promote foreign investment in our country. Due to the Coronavirus Disease, the economy of our India has been affected badly and these steps would also help in boosting India’s economy.

But every action has its reaction and this step will lead the creditors to lose their confidence in the credibility of the cheque system.

Punishment for cheque bounce case: Section 138 of the Negotiable Instruments Act states the dishonour of cheque or cheque bounce is a criminal offence and the punishment includes imprisonment up to two years or monetary penalty or with both.

If the court is convinced that you are guilty and the case of the bank has no merit then it will provide you all the charges.

Conclusion: False Cheque bounce cases along with other frauds cases are rising each passing day. It is very important to be aware about the different types of fraud and especially fraud related to monetary aspects like cheques because money is obviously involved in any job and work. Going by the saying ‘Precaution is better than cure’, it is always good to have knowledge about these frauds so that you can easily prevent that from happening or in some cases when it is not really in the hands of the person to prevent it, you at least know the cure to it. Having knowledge makes you capable of helping out someone stuck in that situation.