How to file a lawsuit in India? 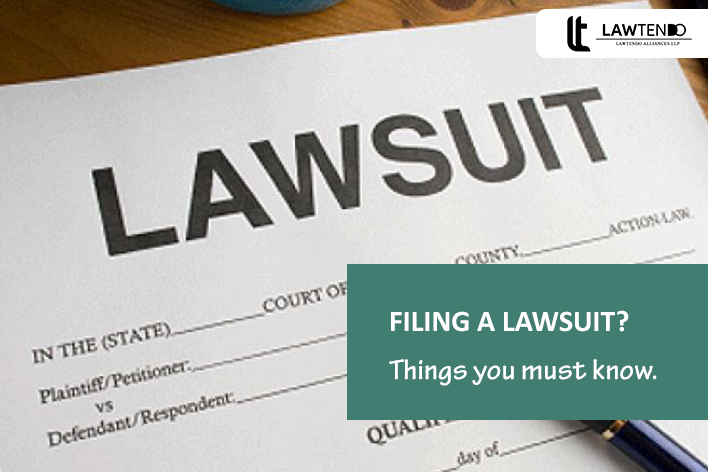 In a world where there are diverse opinions and people, it is evident that disputes and feuds are omnipresent. Many times we come across a situation where we are wronged by an individual. In such a situation the law stands firm to rescue out of the wrong.

What is a Law Suit?

The lawsuit is a civil proceeding filed by a party or parties against each other in a court of law where a party sues each other for compensation or other property. The person suing is known as the plaintiff and the person who is being sued is known as a defendant.
If the detailed process of initiating a suit is not correctly followed then the registry has a right to dismiss the case. Thus the detailed process is as follow:

1. Determine the jurisdiction of the court:

It is a written document which contains all the allegations against the defendant. This document contains the Name of the Court, Nature of Complaint, Names, and Address of Parties to suit. It also contains verification from the plaintiff which states that the contents of the complaint are true and correct.
3. Filing the Vakalatnama:

It is also a written document through which the party who is willing to file the case authorizes the Advocate to represent him/her on their behalf. In case the person decides to represents his/her case on their own then vakalatnama is not required to be filed. Generally, the Vakalatnama contains that the client will bear all the costs incurred during the proceeding, the advocate will have all the right to make decisions on his own in a court of law during a hearing of the case which is in the best interest of the client and many other details.
4. Filing of the complaint:

The defendant needs to be provided with the notice of the lawsuit to give him/her an opportunity of responding. States allows the defendant to be served through email, or personal service, or a process server. This is done because it is not the court’s duty to locate the party.
6. Hearing:

The court on the first day of hearing considering the merits of the case issues notice to the opposite party to submit their arguments and a date is fixed.