What are the Inheritance Rights of a Grandchildren in India? 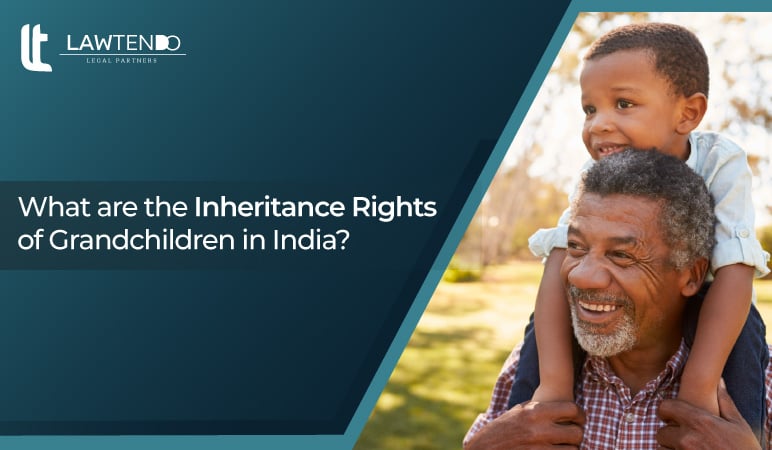 You would have often heard about disputes related to the grandchildren’s right in grandfather’s property. In India, the inheritance law for grandchildren is the respective law of inheritance/succession. Thus, the right of grandchildren to inherit their grandparent’s property must be determined as per the applicable law of succession. There is no uniform law of inheritance. Inheritance laws are mainly governed by religious backing. Succession and inheritance are subject to several personal laws, depending upon the religion. Hindus have separate governing principles while other religions follow their own civil laws. Such as the Hindu succession act 1956 codifies the law relating to succession and inheritance among Hindu, Buddhists, Jains, and Sikhs. Grandchildren’s rights in the property of grandfather also depend upon the kind of property and how it is dealt with i.e., whether ancestral, self-acquired, or if there is a will made for a self-acquired property.

Meaning of Inheritance – Inheritance means the property given to a descendant upon the death of a relative. Right of inheritance is the devolution of property, debts, titles, rights, and obligations to another person after the death of an individual. A person can succeed in or inherit one’s property in two ways:-

By a will (Testamentary Succession) – the person who makes the will is known as the testator and a person to whom property is given under the will is called a legatee.

Hindu Law: A property can be either Ancestral or self-acquired. So, before deciding the question of the right of grandchildren in the grandfather’s property, it is important to understand the nature of the property in the hands of the grandfather – whether it is self-acquired or ancestral.

Rights in the ancestral property are determined on a per-stripes basis and not per-capita. So, the share of every generation is decided first after which the successive generations, in turn, sub-divide what has been inherited by their respective predecessors. If the property is ancestral, the grandchild is entitled to an equal share. They can file a civil suit for declaration and partition along with a petition for interim relief. The Rights protected by law cannot be denied.

When a Hindu having an interest in the ancestral property dies intestate then the succession of their estate will devolve as per succession rule provided in Section 8 of the Hindu Succession act 1956.

Under the Hindu succession act 1956, A Grandchild does not have any birthright in the self-acquired property of his grandfather, if it has been allotted to his father in a family partition as legal heir and not as a coparcener. The grandfather can transfer his property to whomever he desires.

As per the Hindu Succession Act, 1956, the self-acquired property of a Hindu male who dies  intestate devolves by succession, among his legal heirs in the following order:

If the grandfather has made a will, the property is bequeathed to the person named in the will but in case he dies without leaving any will then only his immediate legal heirs such as his wife, son(s), and daughter(s) will have the right to inherit the property which he left behind. As the properties inherited by the wife, son(s), and daughter(s) of the deceased will be treated as personal property of those who inherit the same, no one else has a right to claim any share in the same property.

Inheritance through a will: Every adult and a mentally sound person can execute a Will. A person who has written and executed a last will that is in effect at the time of his/her death is called the Testator. A testator has almost unlimited discretion to decide their Will's legatees (who need not be their family members or relatives) and how to divide their estate amongst the legatees. The right of a Hindu to dispose of by will (or other testamentary disposition) any property that is capable of being disposed of by him/her according to the provision of the Indian Succession act 1925.

Only if the grandfather has specified in his Will before his death that his grandchild will be a legatee/beneficiary of a specified share of their estate, then only that grandchild will be entitled to inherit that particular share of his grandfather's estate/property/assets/wealth. However, if the grandfather dies without making a valid Will, the succession will be governed by the rules of Succession. For example, The Hindu succession act 1956 covers the law regarding intestate or unwilled succession among  Hindus, Buddhists, Jains, and Sikhs.

Muslim Law: In Muslim law, there is no concept of joint family property. The right of inheritance opens on the death of the person and the nearer relatives are preferred over the distant. If the father is alive at the time of the grandfather’s death, he will get the property and not the grandchildren