Is Weed or Marijuana Legal in India? 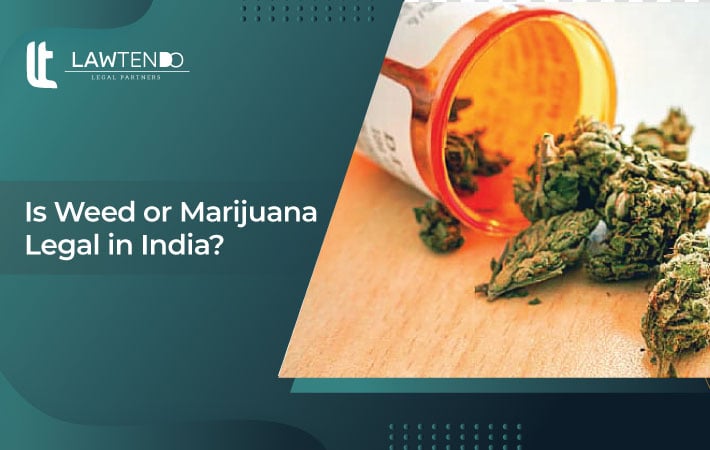 Marijuana, dope, pot, or Weed are the different names of the same drug that originates from the Cannabis Plant. It is also known with several other names like Charas, Ganja, Cannabis, and many more in India, and it’s been one that has developed for thousands of years. Weed in generality was a part of India even in the religious part of it, that is Hindu religion and it is used in the form of Resins (Charas), ganja, bhang, it is consumed in Hindu Festivals like Shivaratri and Holi.

The predominant psychoactive ingredient here is THC which is delta-9-tetrahydrocannabinol, what it basically does is, stimulates the part of your brain that reciprocates or responds to pleasure, including avenues like food and sex. This exerts a chemical which is known as dopamine, which gives you a euphoric, pleasurable and relaxed feeling.

If you vape or smoke weed, the THC could or will get into your bloodstream soon enough for you to get your high in about seconds or minutes after it.

The THC level usually peaks, in about 30 minutes, the effects of which usually may wear off in 1-3 hours. If you eat or drink pot, it may take many of these hours for the effects to fade and become sober and there is also a danger of not much knowledge of how potent your recreational marijuana might be. This is also inclusive of most marijuana that is used in the medical industry

It May Affects Your Mental Health: The experience with marijuana for everyone is varied, some might be pleasant and some might not be pleasant. It mostly makes promises to leave you anxious, afraid, or panicked. To Use pot, can basically raise one's chances for clinical depression or worsen the symptoms of any mental disorders that you already might have.

Scientists aren’t yet sure exactly why. In high doses, it can make you paranoid or lose touch with reality so you hear or see things that aren’t there, a hallucination escape that is not healthy.

Your Thinking May Get Distorted: Marijuana can have a major influence and holds the ability to bias your senses and judgment. The effects according to things like how potent your pot was, how you took it, and how much marijuana you’ve used in the past. It might simply provide reasons to:

Legality: According to the NDPS Act, 1985, people are restricted from consuming Cannabis or any of its by-products.

That is to not possess a Cannabis flower and bud or any of their byproducts, the purpose of why the possession of drugs is also not considered relevant and the punishment depends upon the number of drugs which are in possession. If a person is caught with drugs or found to be a drug addict, he or she would not be subject to prosecution, only if he or she voluntarily chooses to undergo de-addiction treatment.

The variety of legal issues or laws that primarily goes on to deal with possession, as well as the consumption of drugs in India from adults to juveniles include laws like the Narcotic Drugs and Psychotropic Act, the Juvenile Act, and other State Laws regarding the same which varies from one state to another.

Narcotic Drugs and Psychotropic Substances Act, 1985, Section 20: This particular Section includes the production, sale or purchase of, or the transportation, interstate import or export or any other commercial activity of cannabis which is considered punishable,

The Punishment to this varies and depends upon the quantity of the specific drug that is held and the small and commercial quantity of various drugs in India are the following:

To have a hold a comparatively smaller quantity of drugs, the mentioned punishment is imprisonment that stretches to up to 6 months and a fine of Rs. 10,000 or both the punishment and fine.

For holding more than just a small quantity but simultaneously lesser than the commercial quantity also of it, the same punishment is rigorous imprisonment which stretches up to about 10 years, a fine of Rs. 1 lakh, or both the punishment and the fine.

For holding substances for as much as the quantity represented in the commercial quantity which leads to the codified punishment as given under the Section which determines imprisonment which stretches from 10-20 years with an approximate fine of Rs. 1-2 lakh, or both of the above.

If one allows or permits the use of such drugs in their premises, to allow the use for such kind of an offense, that person can clearly be held liable under Section 25 of the NDPS Act and is awarded the same prior punishment as mentioned under Section 20 of NDPS Act.

If one allows or permits the use of such drugs in their premises, to allow the use for such kind of an offense, that person can clearly be held liable under Section 25 of the NDPS Act and is awarded the same prior punishment as mentioned under Section 20 of NDPS Act.

The Different states in India have made their own rules and amendments to the act which makes it even more difficult to navigate with the drugs. Before thinking of possessing even the smallest quantity, just beware that the law can come heavily on you.

The Growing argument to Legalize weed: There have been several arguments regarding the legalization of this drug for a very long time. The legal restrictions to this have not been able to make a real difference, it shifted a legal source of the state’s income to international drug cartels.

In such a situation if it is made legal, there is the advantage that the government can add it to the state income than to the international drug cartels. It can also offer help to the local economy of hilly states with limited water and the huge demand for this drug which can be legally fulfilled by reducing the illegal crimes associated with the same industry.