Ragging in Educational institutions in India - Know its Law and implications 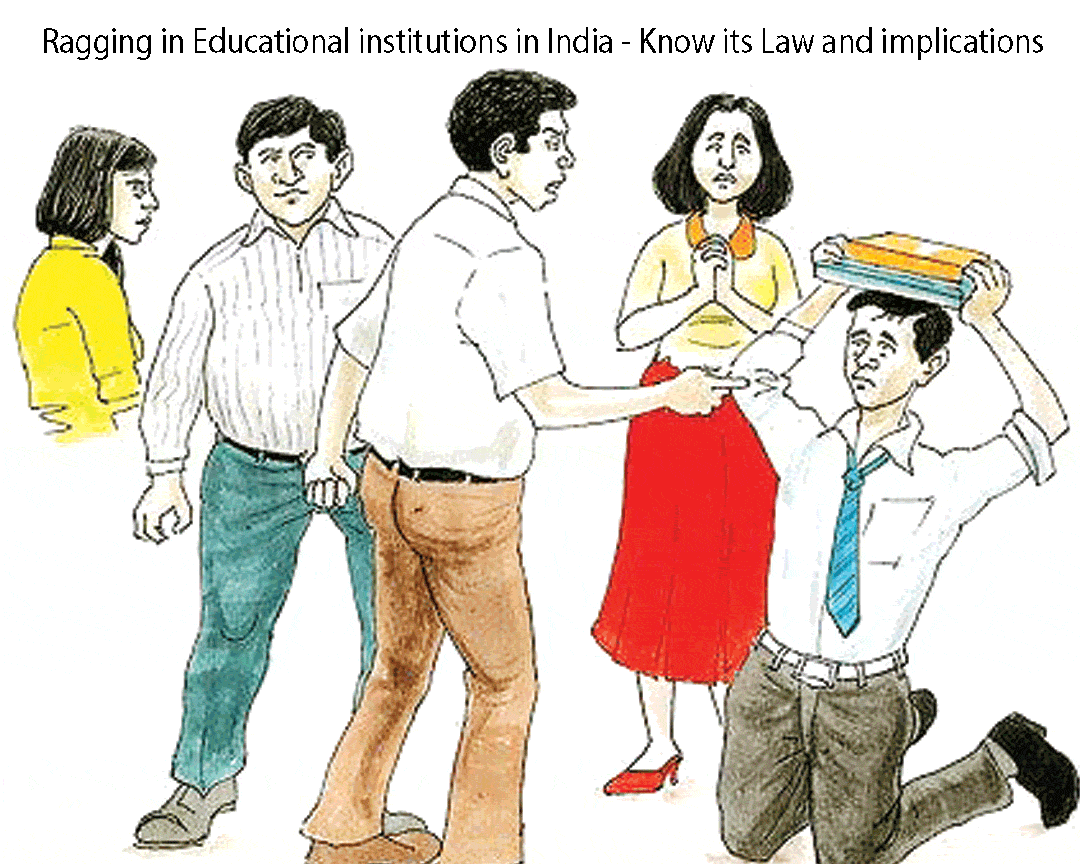 Ragging is a notorious practice wherein there is a social interaction between the seniors and their junior counterparts in colleges and other educational institutions. Juniors are being harassed, teased, tormented or crude jokes are cracked on them. Ragging has lead to consequences of the development of mental disorders or some choose to commit suicide while some are murdered also.

In India, ragging has become a tradition which has transformed from a friendly interaction among the students to violent, abusive and mentally and physically tortures over a past few years. According to a survey of Coalition to Uproot Ragging from Education (CURE), highest number of ragging death was registered in 2009-10 and between 2007-13 total of 717 cases of ragging were reported in which 71 were lead to death, 30 committed attempt to suicide, 128 involved in matters of sexual abuse and 199 cases of injuries while 81 cases of injuries of permanently disabled. CURE is an anti-ragging non-profit organization which was established in 2001 and this organization gave the statistics that the highest number of ragging is reported in Engineering and Medical colleges.

After the famous case of Aman Kachroo in which the 19-year-old succumbed to the injuries of ragging, India enacted anti-ragging laws in 2009 and helplines were set up by the government for lodging complaints. But the abuse of junior counterparts has continued. After nine years of the launch of the anti-ragging helpline, in 2017 highest number of complaints which were registered was 901.

Four States in India which have substantive laws regarding the prohibition of ragging are Tamil Nadu, Maharashtra, West Bengal and Kerala. The common essential features of the legislation of this four States are first, a definition of ragging; secondly, setting up of a disciplinary committee for taking an immediate and effective step against ragging; and thirdly, declaring ragging as a cognizable offense and prescribing punishment for it.

With thousands of students affected with the issue of ragging, the Hon’ble Supreme Court of India while exercising its jurisdiction under Article: 32 & 142 of Indian Constitution in the case of Vishwa Jagriti Mission through President v. Central Government through Cabinet Secretary has laid down certain guidelines for educational institutions to prevent ragging. Some of these guidelines are Anti-ragging movements to be initiated by all educational institutions and colleges, undertaking to be taken from freshmen and their parents, undertaking to be taken from senior students and their parents in case college is introducing this ragging system for the first time, notices to be issued about where to approach for redressal in cases of ragging, principles and teaching staff and management is to have personal interaction with freshmen, pictorial committee to be set up, ragging prone zones to be carefully identified and guarded, society to be sensitised on issue of ragging, failure to prevent ragging is to constructed as an act of negligence, migration certificate is to mention if ever that student indulged in event of ragging, withdrawal of financial assistance to institutes where ragging is reported, student firstly has to approach their college and lastly police not to follow retributive approach while dealing with ragging culprits.

A non-profit organization Security Watch India has launched an application for phones to empower the students. When a student feels that he/she is in danger then a designated button on the phone has to be pressed which will send out text messages, email and phone calls to eight contacts which have been selected. Then the phone automatically goes into the video mode and the recording can be seen by those eight designated members also to the 24-hour call center of Security Watch India. The location of the victim is also shown on Google Maps. This service is free of cost and the application can be downloaded from www.eye-watch.in, the only requirement is a smartphone with a data connection.

To curb this practice out society, media, educational institutions and students themselves need to actively practice together. A proper system to regulate the system of curbing the practice of ragging should be developed and also young minds need to be given sessions about the practice and how it can be curbed with their help because being silent is not an option.