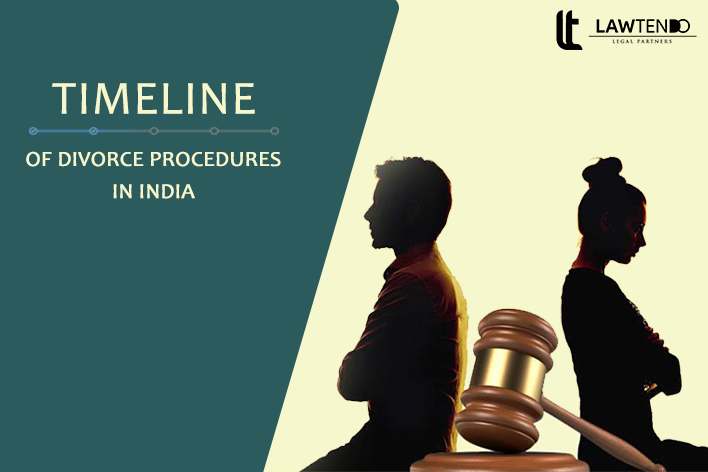 Marriage is a sacred union between two spouses. It is a social institution that legitimizes an offspring and legally binds two individuals like each other’s wedded partners.

But unfortunately not every marriage turns out to be good and here comes the role of divorce. Divorce is the dissolution of the union between the two people. In other words, it is a legal way to call off a marriage.

In reality, divorce is much more than just calling off a marriage, especially in a country like India which is burdened by a huge backlog of cases owing to the long legal procedures of divorce as mentioned under various laws.

How long does it take for divorce in India?

The answer to this question involves various factors that are needed to be considered.
Firstly, there are different types of divorces under the Hindu Law and according to the type of divorce invoked the time period may vary.

First, is a divorce by mutual consent is also known as uncontested divorce which, as the name suggests, involves an agreement i.e. the consent of both the parties/spouses as mentioned under section 13 of the Hindu Marriage Act.

Depending on the facts of the case, a petition may be filed on any of the various grounds mentioned under section 13 of the HMA. A compulsory statutory period of 6 months is then provided so as to provide the couple seeking divorce to rethink the decision and avoid any confusion or regrets regarding the same.

If both parties are not able to reconcile their differences within 6 months, they are required to initiate a second motion for divorce after 6 months and before 18 months. Upon the initiation of the second motion, the court hears both parties and then passes a decree of divorce. Thus the entire process doesn’t usually last longer than 1-2 years for the completion of the entire procedure.

The second type is a contested divorce which is often the messiest type of divorce. This is because, in a contested divorce, couples who are unable to come to an agreement with property division or child custody bring these issues for a judge to decide. There are negotiations and hearings involved for the purpose of settlement making the involvement of a lawyer or mediator necessary. Hereinafter, the divorce petition is filed and the spouses have to respond to the petition for divorce within 30 days after which the proceedings take place.

In case, the decision passed by the Court is not acceptable to either of the parties, the party can file an Appeal against that Order within a period of 3 months from the date of the order. Usually, if the spouses agree to terms and negotiations then it might take somewhere around 2 years to obtain the divorce but in case of an ugly spat the case might end up being stretched and linger around for as long as 7-8 years.

Thus, usually, the time duration for divorce proceedings in India varies and differs from place to place and case to case. However, at Lawtendo we offer you services of over 15000+ lawyers that can help and assist you get a timely divorce.

how to get a timely divorce?

the answer is simple. have a consultation with some of best divorce lawyers in India with Lawtendo. Any issue or problem can be simply expressed via mail at info@lawtendo.com or by calling on +91-9671633666 and we will help you in sorting out all your legal issues.