What are the key points to remember when drafting a legal notice? 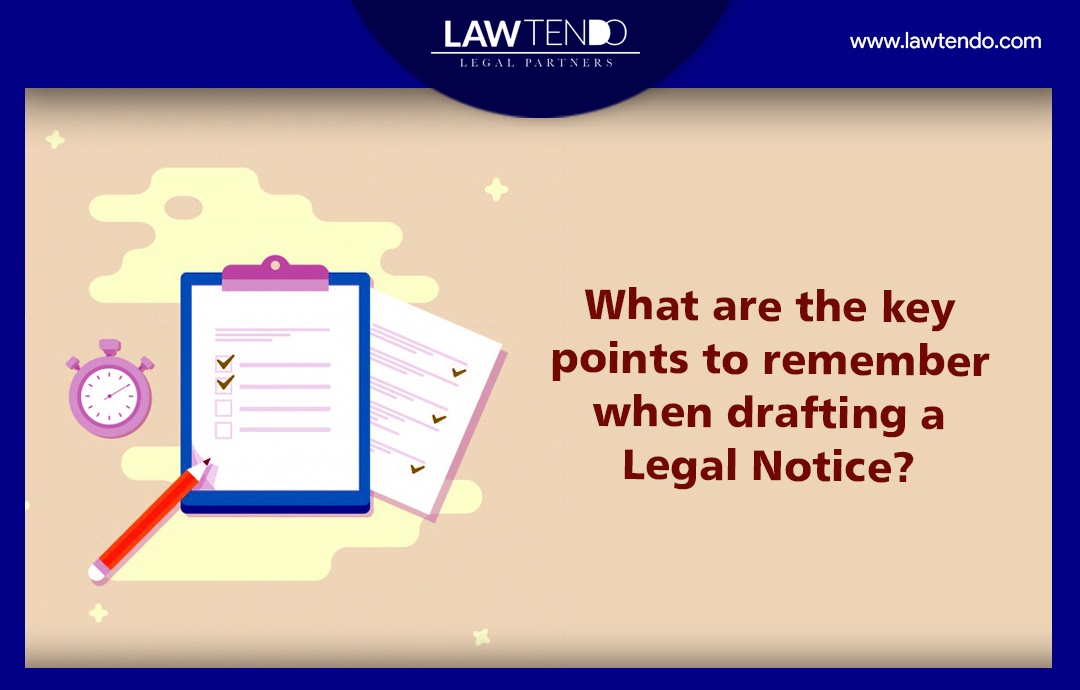 What are the key points to remember when drafting a legal notice?

A “Legal Notice”  is a notice indicating your opponent that you are preparing to litigate a lawsuit against him in case the so called demand is not fulfilled.

A Legal notice is a formal written document sent by a person or an entity with respect to some grievance. It is sent as a warning to the receiver that the one sending the notice have certain grievances which are not properly taken care of by the receiver, although the receiver has given enough opportunity to the receiver to resolve the problem.

In today’s world we enter into numerous litigations with individuals/firms wherein filing of civil suit becomes imperative which we do generally file. Some individuals/firms enters into litigation straightaway while others opt for serving a notice upon opponent of giving out intention filing of a civil suit in court of competent jurisdiction. There are certain legislations which make it mandatory to file a legal notice before filing  any litigation otherwise that litigation will be bad in law. For eg. The Negotiable Instruments Act, 1938. It therefore becomes important for us to understand as to what is meant by Legal Notice which is discussed herein.

Section 80 of The Code of Civil Procedure, 1908 provides for sending of a legal notice to the Government or public officer if one wants to initiate a legal action against them for any act claimed to be done by such public officer during the course of his official duty until the expiration of two months. The purpose of the notice is to give Secretary of State or the public officer a chance to reevaluate his legal position and to offer some kind of compensation without going to a court of law.

Some of the key point which needs to be kept in mind while drafting a legal notice are as under:

*Address & Title: A legal notice must contain the complete and correct address of the persons to whom it is addressed so that it may successfully delivered to them.

It should clearly spell out the matters which forced the sender to take this extreme step of issuing legal notice. It states in complete details about the violations and/or breach committed on the part of the receiver.

Further in a legal notice there must a clear warning be given to the receiver to the effect that if the demands of the sender are not fulfilled or complied with then the sender will initiate appropriate legal proceedings against him in the court of law.

*Consequences: A legal notice must contain the consequences or action that may follow in case the demands are not met in time.

Who can help you with this?
Looking for an experienced lawyer? Look no further. Have a consultation with some of best lawyers in India with Lawtendo.