What do I do when my wife misuses 498A against me? 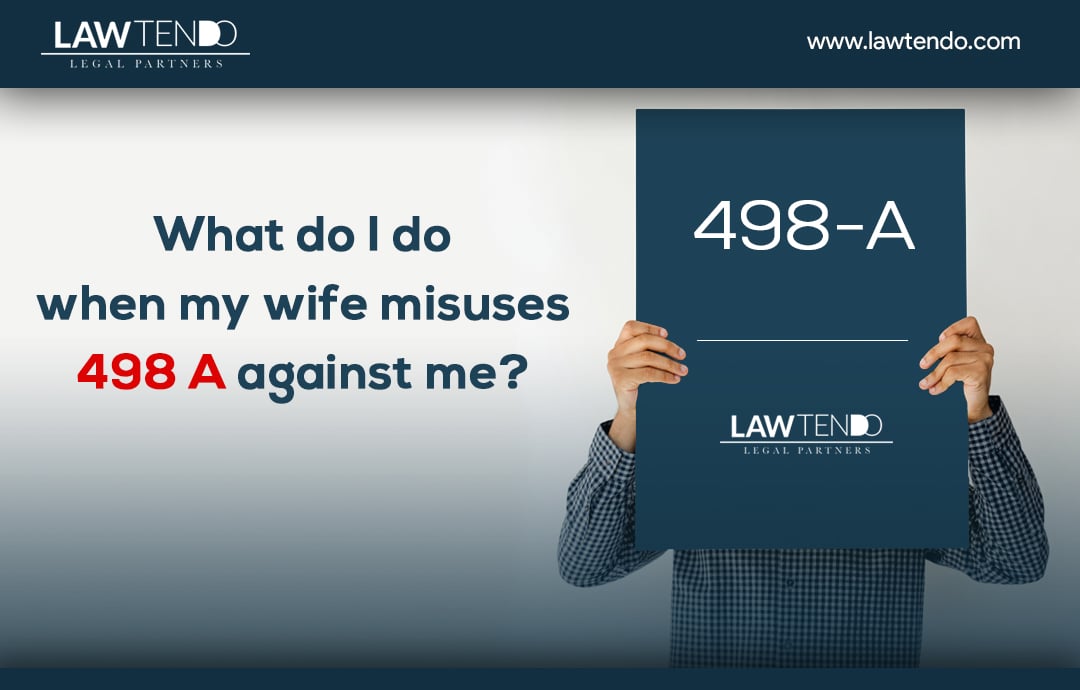 Just to give you an idea Section 498A is related to marriage. To start with first we have to look at what this word marriage means. ‘Marriage is the voluntary union for life of one man and one woman to the exclusion of all others.’ It is a social institution where the husband has the responsibility to take care and maintain his wife. He cannot neglect his duties. But on this great institution, a stigma called ‘dowry’ still exists. Women are ill-treated, harassed, killed, divorced for the simple reason that they didn’t bring dowry.

Now, ‘Matrimonial Cruelty’ in India is a cognizable, nonbailable and noncompoundable offense. It is defined in I.P.C. under Sec. 498A as:
Husband or relative of husband of a woman subjecting her to cruelty. Whoever being the husband or the relative of the husband of a woman, subjects her to cruelty shall be punished with imprisonment for a term, which may extend to three years and shall also be liable to a fine.

A violation of this section, its goals, and its aims are on the rise with the woman frivolously making false allegations against their husbands with the purpose of getting rid of them or simply hurting the family.

Women use the weapons called Section 498A and Dowry Act to file a false complaint so as to attack their husband. Section 498A of the Indian Penal Code is a provision under which a husband, his parents, and relatives can be booked for subjecting a woman to cruelty to meet their unlawful demands (dowry). Generally, the husband, his parents, and relatives are immediately arrested without sufficient investigation and put behind bars on non-bailable terms. Even if the complaint is false, the accused is presumed to be guilty until he or she proves innocence in the court. The maximum punishment if proven guilty is imprisonment for three years.

The abuse of this section is rapidly increasing and the women often well- educated know that this section is both cognizable and non-bailable and impromptu works on the complaint of the woman and placing the man behind bars.

In the last 20 years of criminal law reform, a common argument made against laws relating to violence against women in India has been that women misuse these laws. The police, civil society, politicians and even judges of the High Courts and Supreme Court have offered these arguments of the "misuse' of laws vehemently.

The very nature of anti-dowry law makes it wife-biased (daughter-in-law biased), discriminatory, stringent, unprecedented, exceptional and poorly formulated. One line of written or oral complaint from your wife or her family member can land a husband and his entire family in jail without any investigation.

If you find yourself in the following situation, please contact Lawtendo.

Supreme Court of India has recently issued a new set of directions to prevent the misuse of Section 498A of the Indian Penal Code.

i) (a) In every district one or more Family Welfare Committees be constituted by the District Legal Services Authorities preferably comprising of three members.

(b) The Committees may be constituted out of paralegal volunteers/social workers/retired persons/wives of working officers/other citizens who may be found suitable and willing.

(c) The Committee members will not be called as witnesses.

(d) Every complaint under Section 498A received by the police or the Magistrate be referred to and looked into by such committee. Such a committee may have interaction with the parties personally or by means of telephone or any other mode of communication including electronic communication.

(e) Report of such committee is given to the Authority by whom the complaint is referred to it latest within one month from the date of receipt of the complaint.

(f) The committee may give its brief report about the factual aspects and its opinion in the matter.

(g) Till report of the committee is received, no arrest should normally be affected.

(h) The report may be then considered by the Investigating Officer or the Magistrate on its own merit.

(i) Members of the committee may be given such basic minimum training as may be considered necessary by the Legal Services Authority from time to time.

(j) The Members of the committee may be given such honorarium as may be considered viable.

(k) It will be open to the District and Sessions Judge to utilize the cost fund wherever considered necessary and proper.

ii) Complaints under Section 498A and other connected offenses may be investigated only by a designated Investigating Officer of the area. Such designations may be made within one month from today. Such designated officer may be required to undergo training.

iii) In cases where a settlement is reached, it will be open to the District and Sessions Judge or any other senior Judicial Officer nominated by him in the district to dispose of the proceedings including the closing of the criminal case if dispute primarily relates to matrimonial discord;

iv) If a bail application is filed with at least one clear day’s notice to the Public Prosecutor/complainant, the same may be decided as far as possible on the same day. Recovery of disputed dowry items may not by itself be a ground for denial of bail if maintenance or other rights of wife/minor children can otherwise be protected.

v) In respect of persons ordinarily residing out of India impounding of passports or issuance of Red Corner Notice should not be a routine;

vi) It will be open to the District Judge or a designated senior judicial officer nominated by the District Judge to club all connected cases between the parties arising out of matrimonial disputes so that a holistic view is taken by the Court to whom all such cases are entrusted;

viii) These directions will not apply to the offenses involving tangible physical injuries or death.

If a false complaint is registered against you by your wife, you have two options – either to defend your case and wait for the judgment or to file a counter case against your wife and prove her wrong. Both are detailed below.

Collect as many pieces of evidence as possible
Record all conversations (voice, chat, email, letters, etc.) with those threatening and keep the originals in a safe place. It is advised not to produce the original evidence before anyone.
This evidence will be fruitful in the time of getting anticipatory bail or notice bail from the court.

Safeguard your Family
There are hundreds of cases where the whole family is put behind the bars just because of one false complaint. Section 498A has a very wide jurisdiction under which the women can complain against anyone in the family. Even the mother and the father of the husband are not immune. In such a situation the husband can do the following to safeguard his parents and other family members –

Once the FIR is lodged, the man can apply for anticipatory bail or notice bail so as to ensure that the innocent family members are not going behind bars without any just cause. Different states have different mechanisms to deal with the problems of false cases.

Lodge a complaint to your nearest police station, detailing about blackmailing, her false allegations, and her unbearable behavior. Request in your complaint that police should take necessary actions to stop her from making threats and abuses immediately, also tell the police verbally and in writing along with available evidence that you are facing blackmailing and threats and mental torture from your wife and/or her family, as the case may be. Filing such a complaint early on can save you from a lot of trouble later on if you are the first one to file this.

For any help, contact us at www.lawtendo.com. We’re here to help you with some of the best lawyers in the field.