What is the procedure for court marriage in India? 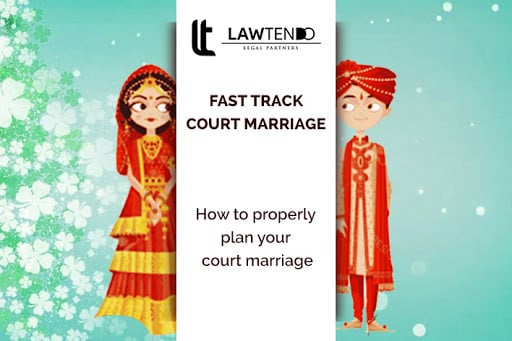 Court marriages in India are formalized under The Special Marriage Act, 1954. The process of conducting a court marriage remains the same all over India. Court marriage can be solemnized between two individuals irrespective of them belonging to the same or different religions, their caste, religion or race. The court marriages take place in a court in front of a marriage officer in accordance with the act and thereafter the parties can directly apply for a marriage registration certificate.

Under Section 4 of The Special Marriage Act, the following rules are listed for court marriages in India:

1. The parties must meet the necessary conditions as listed in the act before signing the Civil Marriage Contract

5. The parties to the marriage should not fall within the degree of prohibited relationship.

Legal marriage procedures can only be conducted if proper documentation is in place. It is advisable to hire an attorney who could help you with the entire court marriage process right from arranging your documents till getting your marriage registration certificate for you.

2.Receipt of the fee paid for the registration of marriage in the District court

3. Documents prooving the age of both parties. (preferably a Birth Certificate or passport)

4. Residential proof (preferably Aadhar Card, Voter ID, Ration Card or Driving License). For instance, if the couple wants to get married in Delhi then one of them should have a proof of stay in Delhi for at least 30 days. The proof can be in the form of ration card or report from the station house officer

5. Signed affidavits from each party claiming their marital status; unmarried/widowed/divorced and that they are not related to each other within the degree of prohibited relationship defined in the Special Marriage Act

6. Passport size photograph of the bride and groom (2 copies)

7.In case of a divorcee a copy of divorce order and in case of a widower the death certificate of the previous spouse.

Additional Document requirements in case of a foreign national:

1.A copy of passport and visa in India

2.Proof of residence from either party claiming a minimum of 30 days stay in India

Documentation required of witnesses for the marriage

1.One passport size photograph of each witness

2.PAN Card of all witnesses

3.Identification proof of the witnesses in the form of a driving license, adhaar card, and others.

Court marriage cost varies from state to state. Generally, court marriage procedure fees are between INR 500 to INR 1000. Even though the fees for court marriages are less the process is long and tedious and only an expert lawyer can guide you best through the entire process.

PROCEDURE FOR COURT MARRIAGE IN DETAIL