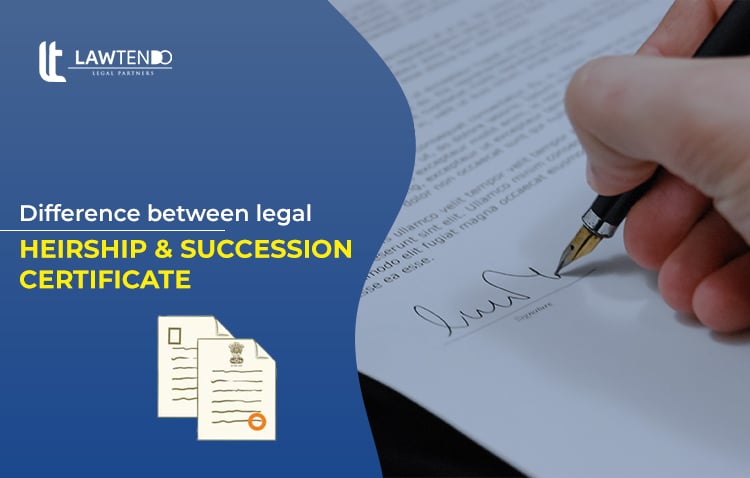 While both legal heirship certificate and succession certificate are procured in relation to identifying and authenticating the relationship of the person as the legal heir of the deceased, both of the certificates are distinct from one another and serve as to fulfil different purposes.

The Indian Succession Act of 1925 defines a succession certificate as the certificate issued by a court to the legal heirs of a deceased to establish the authenticity of the heirs and give them the authority to inherit debts, securities and other assets of the deceased.

The purpose of a succession certificate is limited to the ambit of debts and securities such as insurance, deposits in banks, shares or any other security of the central or state government to which the deceased was entitled; with the primary objective to facilitate collection of such securities and debts and simultaneously providing protection to the parties paying debts to the representative of the deceased person and to ensure that succession laws are strictly followed.

In cases where a person does not die intestate (means he made a will before he died), a succession certificate may not be required in those cases as the distribution of the assets of the deceased will be done in accordance of the will by the duly assigned executor of that will. But in the absence of the will, banks and other financial institutions rely on the succession certificate for similar purposes.

A petition has to be filed by the beneficiary so as to acquire the succession certificate.

The petition has to be filed before the District Judge (as per Section 372 of The Indian Succession Act) under whose jurisdiction the property lies or under whose authority the deceased lived.

The petition must contain information regarding name of the beneficiary, his relationship with the deceased, names of other heirs and the securities in pursuance of which the succession certificate is applied for. The petition must be signed and verified by the beneficiary. Along with this, the death certificate of the deceased should also be attached.

The court then issues a notice to the concerned parties and prescribes a time period under which any objections can be raised. When no objections are raised, a certificate of succession is issued to the beneficiary with the option of having right to receive dividends and interest attached to the property or the right to transfer the asset or both. However, when there are a multiple beneficiaries, a joint certificate of succession is issued instead of multiple certificates that are legally binding.

Usage of the certificate: The usage of this certificate is limited to matters including claiming of employee benefits of the deceased, insurance claims, property registration, gratuity etc. It can be issued and relied upon for certain limited purposes only.

Legal Heir certificates are issued by revenue officers such as Tahsildar of the taluk to identify a particular deceased person’s legal heir as The Indian Succession Act does not provide a specific method to obtain it.