Distribution of Property if there is no Will 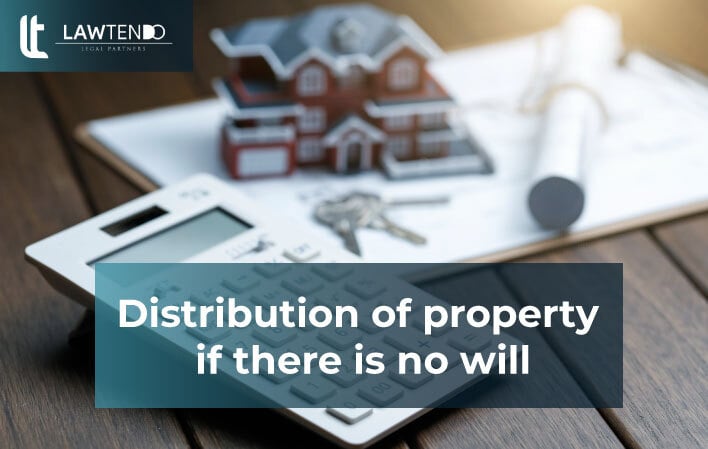 ‘A planned will make a quitter home’. A will is very important in order to avoid confusion regarding succession. Thus, the rules of non- testamentary succession are very helpful and also, make justice with the near ones.

A will is a legal document made which deals with the disposition of the property of the owner, or the testator. The process of distribution of property without a will is known as intestate succession. When there is no will, only married or civil partners and some close relatives can inherit the property. Married partners or legal partners can inherit if they are actually married or in a civil relationship at the time of death of the intestate. So if a couple has divorced before the death, inheritance is not legal. The cohabiting or the ‘common law’ partners cannot inherit property if they are not legally engaged. According to section 30 of the Indian Succession Act, 1925, the person who dies without making a will for the disposition of his property is known as an intestate. This process is guided by various rules which may differ from one another like the Hindu Succession Act, Muslim Succession Act, etc. as these are mostly governed by personal laws. However, by the Indian Succession Act, 1925, if a person dies intestate, the property would be equally distributed among his legal heirs.

Benefits: If a person makes a will before his death, it becomes clear as to who shall be the successor of the property. However, if the person dies intestate, a family dispute is likely to occur regarding the sharing of property. In order to avoid these disputes, the rules regarding the intestate succession for distribution of property after death if there is no will, are very useful. It also enables mutual partition of the property.

Hindu Succession Act, 1956: The property of a Hindu male dying intestate is distributed among his heirs in accordance with sections 8 and 9 of the Act. Section 8 states the preferential order of the devolution of the property which is, Class I heirs and then Class II heirs and then agnates, cognates being the last. According to section 9 of this Act, the property shall be devolved amongst the Class I heirs excluding all the other heirs. Class I heirs include the spouses, parents, children, and some other relations like sons and daughters of pre-deceased sons and daughters and the property shall be so distributed that each of these branches shall get equally. For example, a person dies intestate leaving two wives, one daughter, and two sons of a pre-deceased son. So both the wives will get 1/6th each (their part 1/3rd is divided between them), the daughter will get 1/3rd and the two grandsons will get 1/6th each (the 1/3rd share of the pre-deceased son is divided between them). This rule is provided in section 10 of the Act. It also states that to be a widow underclass I heirs, the marriage must be valid under the Hindu Marriage Act, 1956; Laxmibai vs. Anusuya, AIR 2013 Kar 24.

Property is distributed among class II heirs such that those in order 1 shall get preference to those in order 2 and this continues, as per section 11. Section 12 deals with the inheritance of the agnates and the cognates.

There are certain cases where the heirs are disqualified from inheritance to property. They are-

Muslim Law of Succession: Non –testamentary inheritance of property takes place only after the death of the person and any child born into a Muslim family does not inherit property right after his birth. There are 12 shares in the property and the share of each person may vary under certain circumstances. These sharers are-

Property is distributed under the Muslim law in two ways- per capita or per stripes distribution. In per capita distribution, the property gets distributed equally among the heirs. So the share that each of them gets depends on the number of heirs. This is more applicable in Sunni law. As per strip distribution, inheritances to property in case of no will property distribution depends on the relation that the concerned heir has with the deceased, that is, whether branched or straight. So the near relatives inherit more than the far relatives. This is applicable in Shia law.

Indian Succession Act, 1925: This law is applicable to all other religions including Christians. There are various principles for such inheritance like-

Documents Required: In order to devolve upon the property of the intestate, some documents are needed. Firstly, the death certificate of the deceased must be issued from a registered medical practitioner. A succession certificate is a must for an inheritance to immovable property. The affidavit and the ID proofs should also be submitted to the court along with the document stating the proof of their relationship with the deceased.

Lawtendo is an expert organization for you to help in hiring a lawyer. We have a 24 hours service to solve your problem and shortlisting the best lawyer for you. We have lawyers for divorce, court marriage and registration, property possession delay, cheque, and money recovery; will drafting and agreement, employment issues, builder dispute, and a lot more. In the case of making a will and also recovery of property in case of non- testamentary succession, Lawtendo helps in getting suitable lawyers for efficient query resolution without much hassle.