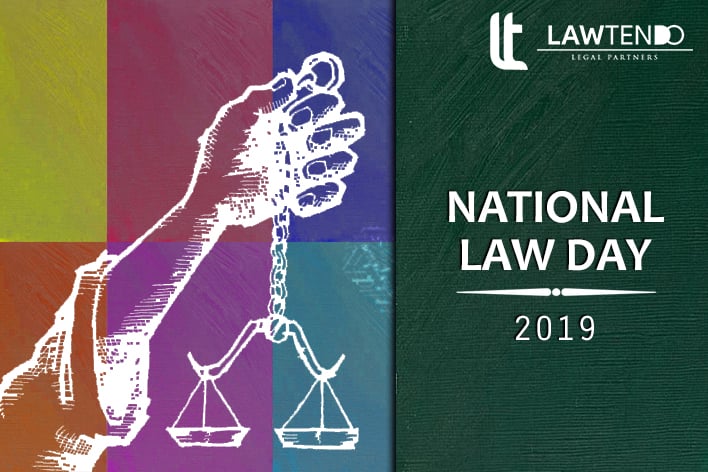 National Law Day, also known as Samvidhan Diwas and Constitution Day, is celebrated on November 26 each year to pay tribute to the Constitution of India. Over the years, Indian law has seen many amendments and upliftments. We, as a nation, have been trying to make the legal system better and more advanced so that better justice is served to one and all.

We take this opportunity to throw light on a few bills and reforms that have taken place in India in 2019.

In the first session of the Parliament after the Lok Sabha elections, the Parliament passed some landmark bills like repealing of Article 370, geographical reorganisation of Jammu and Kashmir, Triple Talaq Bill, New Motor Vehicle Amendment Bill creating the record for maximum Bills passed in the last 67 years.

Salient features of revoking of Article 370 in Jammu and Kashmir:

- Central Laws can directly be applied on the UT

- No separate laws for Jammu and Kashmir

- Indian citizens from other states can buy land and property there

- No two flags shall be promoted

- There will be elections every 5 years

- The centre can declare a financial emergency under Article 360

- Police will be managed by the Centre

Introduced in Lok Sabha on 25 July 2019, by the Minister of Finance, Nirmala Sitharaman, this bill amends the Companies Act, 2013 in the following manner:

- Ensuring compliance of the default and prescribing stiffer penalties in case of repeated defaults.

- Re-introduction of the declaration of commencement of the business provision

- Greater accountability with respect to filing documents related to creation, modification and satisfaction of charges

Introduced in Rajya Sabha by the Minister of Finance, Nirmala Sitharaman, on 24 July 2019, The Insolvency and Bankruptcy Code (Amendment) Bill provides a time-bound process for resolving insolvency in companies and individuals where the target companies or individuals are unable to repay their outstanding debts.

Introduced in Lok Sabha by the Minister of Labour, Santosh Gangwar on 23 July 2019, The Code on wages 2019 seeks to regulate the wage and bonus payments made to employees in industries, trade, businesses or manufacturing units. The code is acted in replacement of the following four laws:

Introduced in Lok Sabha by the Minister of Health and Family Welfare, Dr Harsh Vardhan on 22 July 2019, The National Medical Commission Bill seeks to repeal the Indian Medical Council Act, 1956 to provide for a better medical education system.

Introduced in Lok Sabha by The Minister of State for Personnel, Public Grievances and Pensions, Jitendra Singh on 19 July 2019, The RTI (Amendment) Bill seeks to amend the RTI Act, 2005.

Introduced in Rajya Sabha by the Minister for Law and Justice, Ravi Shankar Prasad on 15 July 2019, The Arbitration and Conciliation (Amendment) Bill contains provisions to deal with domestic and international arbitration and it also defines the laws for conducting conciliation proceedings.

Introduced in Lok Sabha by the Minister for Road Transport and Highways, Nitin Gadkari on 15 July 2019, The Motor Vehicles (Amendment) Bill provides for the grant of licenses and permits related to motor vehicles, standards for motor vehicles, and penalties for violation of these provisions.

At Lawtendo, we take a leap into improving the Indian Legal System by introducing online technology into the same.  We empanel 15000+ lawyers on our platform and can connect you with them in any state, city or district in India. Our services range from documentation, processing, drafting to litigation and we can reduce your legal cost by 40%. We provide you with the services of a full-fledged legal firm in a cost-effective and efficient manner.