Protection of children being victims of child abuse and aggression 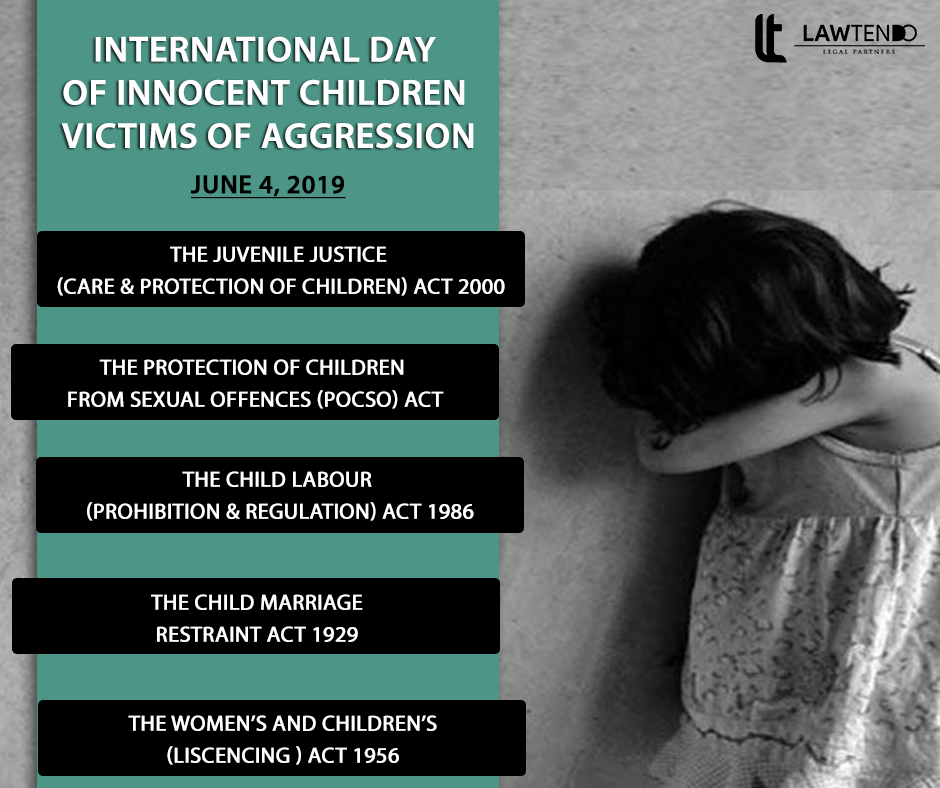 Child abuse in India is usually a neglected phenomenon especially since it begins at home usually or by family members. Physical and mental abuse, injury, neglect or negligent treatment, exploitation humiliation, comparison and sexual abuse are literally harmful to a child's mental and physical health, survival, honour and evolution.

This article throws light upon the suffering of children as being victims of aggression and abuse in India and how can they be protected against the same.

Abuse is generally considered as a more public domain, however, intra-family abuse or abuse that takes place in schools or institutions of education is also extremely paramount and have some serious consequences.

Societal abuses are a result of poverty such as malnutrition, lack of education, poor health, sexual abuse etc are recognized by Indian legal system and various acts and laws have been passed for their jurisdiction. However, there are no laws that protect children against abuse at home.

The International Day of Innocent Children Victims of Aggression is celebrated on 4th June every year in India to acknowledge the sufferings of children across the globe. The main aim for celebrating this day is to spread awareness about the pain and suffering faced by the victims of aggression as children. Numerous events are organized in children care organizations all over the country where debates and discussions are held on the protection of children against abuses and child rights. Children are made aware about their various rights in order to lead their lives with dignity and respect.

In a country like India where there is a range and variety of classes, races, religions and castes and staggering rates of poverty it cannot even be  imagined upto what extent is the exploitation and violence suffered by the children every day. According to a report published by the Ministry of Women and Child Development, children that are between the age groups of 5 to 12 are at a great risk of abuse. Many children work as prostitutes and labours. Child trafficking one such unsettling affair that has always been there in the context of aggression of children.

However, a staggering percentage of the violence reported has been as emotional abuse by the parents. Therefore including home amongst the most disturbing places for a child in a country like India. The International Day of Innocent Children Victims of Aggression provides a great opportunity to raise awareness on the sufferings of children not only in I dia but also worldwide.

Wiping out child abuse in India is complex and requires a dedicated strategy. Indian legal system has taken a step by enacting various laws and rolling out various acts against child abuse, some of which are mentioned below:

1.    The Protection of Children from Sexual Offences (POCSO) Act, 2012: This Act seeks to provide strong legal framework for the protection of children against sexual abuse, harassment, pornography while safeguarding the interest of the child at each stage of judicial proceddings. This Act incorporates child friendly methods for reporting or recording of evidence and investigation. This act is gender-neutral for both the victim and the accused. Even abettment of child sexual abuse an offence under POSCO.

2.    The Criminal Law (Amendment) Act, 2013: It involves the introduction of various new sexual offences under the Indian Penal Act, such as Section 376(2)(i), IPC, which involves punishment for rape of a female under 16 years of a minimum term of rigorous imprisonment for 10 years and/or hefty fine, which can/may be extended to life imprisonment.

3.    The Juvenile Justice (Care and Protection of Children) Act, 2015: This Act has become a  fundamental law in dealing with children in need of protection. It covers their needs through due care and protection. It addresses matters in the best interest of children which is a very child-friendly approach.

To get updates about such blogs visit www.lawtendo.com. All your queries regarding the same will be taken care of. You don’t need to worry. Just drop us a mail at info@lawtendo.com or you can contact our consultants directly on +91 9671633666.

Lawtendo is an online legal forum that offers 15,000+ lawyers in their network base spread over 60+ cities, Lawtendo is one of the growing and leading platforms of help and provide legal solutions. You can consult the lawyer online and also ask legal advice online. Lawtendo lets you find the lawyer anywhere in India online.