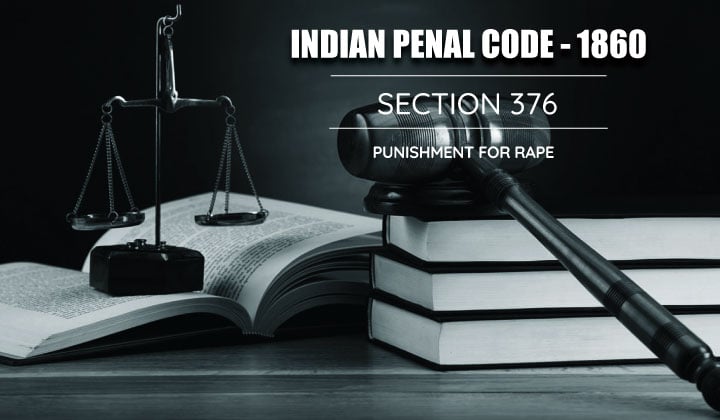 a) Being a police officer commits rape—

(i) within his police station limit or

(ii) In the police station premises

c) The management or staff of remand home or other custody under any law or of an institution for women and children takes misusing his official position and rapes on an inmate.

d) The  management or hospital staff, taking advantage of his official position and rapes a woman in that hospital; or

f) Raping a girl below 12 years of age

Section 376 deals with punishment for rape, it is contained in chapter XVI of the IPC. This chapter deals with offences affecting the human body

Under the Indian penal code, sexual offences including rape and sodomy are discussed in sections 375 to 377.In the Indian Penal Code, the offence of rape is defined in section 375 of the code. As provided by this section of the Indian Penal Code, rape is committed by a man if he into vagina penetrates his penis, mouth, urethra or into anus of women or inserts any object, or penetrating any part into the vagina, urethra, and anus of a woman or put in his mouth into the vagina, urethra or anus of a woman or makes her do so with him or any other person, under the circumstances falling under following descriptions:

Opposed to her will.

Further, the section states insertion can be “ to any extent” even slightly and partially. Injuries to the private part of the woman is not essential. A person is guilty only on the fact of penetration.

A person who rapes a woman under the age of twelve will be punished with imprisonment which shall not be less than 20 years which can be extended for life as incorporated under Section 376AB of the IPC. The legislation also provides that for the sexual intercourse by a person in a fiduciary position between a man and a woman where one can dominate the other as in the relationship between the head of office and staff, or doctor and nurse where the offender is liable to the rigorous imprisonment for not less than 5 years which can extend to 10 years under section 376B.

After the Nirbhaya Case, 2012, several modifications were made such as the imprisonment for rape was extended to 10 years, 3 years was imposed for stalking under Section 354D of the IPC, under Section 376D punishment for Gang rape was increased from 10 years to 20 years. The acts like physical contact, words or gestures, demand or request for several favors, showing pornography against the will of a woman, or making sexual remarks are now considered offence, and laws are made under IPC.

The offence of rape according to the IPC section 376 is a very brutal offence and it is strictly condemned in terms of criminal law. The offence of rape is a cognizable offence, thus it is heinous crime. It is an offence that is non-bailable meaning that the bail cannot be given as a matter of right. The court also exercises the discretion whether to grant or not grant the bail.

Anyone who is either a victim of a crime, a person who is a witness to a crime or who has information about the crime can file an FIR (online or offline). The term sexual violence not only includes rape it also defines offences like sexual harassment, sexual assault, voyeurism, stalking, molesting, and trafficking.

A victim is free to choose whether to report a crime or not, if you desire to punish the offender and for justice, you should act and report the incident. A victim should be admitted to a public hospital immediately after the incident and give a statement to the police regarding the events and take the evidence. A complaint can be registered at the nearby police station. When a complaint is registered they will take a detailed statement and take your medical examination.

In the Shakthi Mills Case the Bombay High Court last month handed down a judgment upholding the validity of Section 376E of the Indian Penal Code, which authorizes the imposing the sentence of life or capital punishment to offenders on their second rape conviction.

A copy of the FIR registered should be obtained from the police station. It can be obtained by the victim of family members for free.