How is Property Dealt with In Case of Divorce? 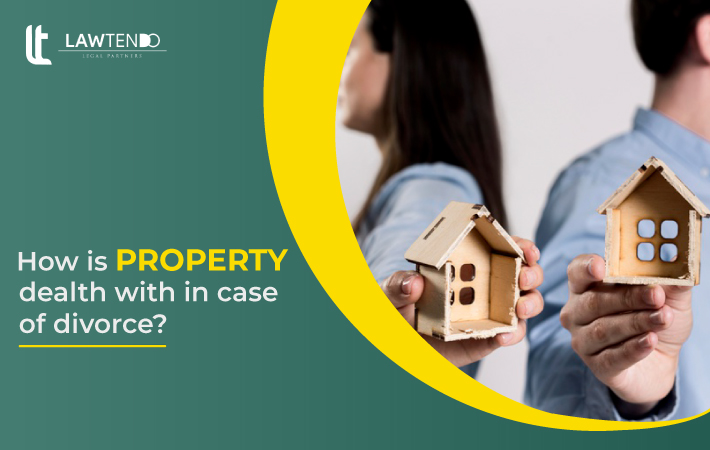 But later on, the process of divorce becomes complicated and hence it becomes tedious to know how the rights would come to an end. It becomes easy to dispose of and distribute the marital property when the divorce is acquired through mutual  consent as the things are clear about the same beforehand. But when such divorce is granted according to the legal order, then it becomes difficult to know who shall own which portion of the property.

In circumstances where the couple has purchased a property commonly under both their names, yet is eligible of getting a partition, the two parties reserve the privilege to stay in the property until the divorce is done. Neither of the life partners can truly ask the other to empty the property, as they are co-proprietors in such a case.

The wife has a complete share in her marital asset or the ‘stridhan’ as per the Hindu Marriage Act and she becomes the ultimate owner of the property after her divorce. She also has a right to the husband’s property after the divorce.

There are various grounds for filing a divorce. Either mutually or husband commits any cruelty or any act which can act as a ground for filing the divorce. When a husband renounces the world or changes his religion, even in such a case the wife has the right to file a divorce under any personal laws as well as other laws.

At first, there were no rights to a woman in her husband’s property but after the latest amendment, a woman is also entitled to get an equal share in the property according to the Hindu Marriage Act and the Hindu Succession Act. So let us study what exactly happens to a property after the divorce.

What happens to joint property in a divorce?

It is a common problem that occurs during the divorce. Individual property is disposed of accordingly but the question remains as to what shall be the status of the joint property. At that point when a couple chooses to separate, the house which is jointly owned is sold to a monetary establishment. So there has to be a proper way to settle all that which are:

Who typically gets the house in a divorce?

As the marital home is the ultimate and the exclusive asset of the spouse, it is necessary that the ownership of the property is cleared. It not only involves the married couple but also their entire family. They are emotionally attached to the property as well.

But, the law is above all the emotions and hence the judge would give the decision of the house in favor of the owner of the house. We all know about the saying “Finders keepers” but in the case of a property after divorce, this doesn’t apply.

What does the wife get after a divorce?

A wife is entitled to get the basic necessities after the divorce. She is also entitled to get maintenance under section 125 of CrPC. Now, this maintenance means a certain amount to be paid by the husband to the wife after divorce in order to maintain herself and the children if any. If there is an ancestral house, then she has a right to claim the share. She is entitled to receive any advance maintenance if she lives separately after filing a case for divorce which is known as “Interim Maintainanance”.She also has the right to get custody of their children with respect to the Hindu Minority and Guardianship Act, 1956.

In the case of Parsi Laws, A woman is entitled to get one-third of the share in the ancestral property after divorce. In case of no co-partners, she is entitled to claim half of the share. A wife is also entitled to receiver maintenance which is not more than one-fifth of the amount of the husband’s income in order to maintain herself. Also, she can be the guardian of the child.

Talking about Christian Law, the woman has a right to get maintenance up to one-fifth of the husband’s income, an equal share in the property and if there are co-partners, then one-third share in the property. It is at the discretion of the court to grant the custody of the child to the deserving spouses.

Get in touch with the best divorce lawyer now

How long does a man have to pay alimony?

The duration of such alimony depends on the duration of the marriage. The law says that for marriages with a duration beyond 10 years, the husband has to pay a greater alimony.

Also, if the spouse is young then the period of such alimony is less as it is expected that she will sustain herself after finding a rightful job.

The spouse who is expected to have a high-profile job is obligated to pay a greater sum.

The terms and states of alimony in India change according to the personal laws.

Removing marital property before divorce is always a concern and hence there are suitable laws governing the same. Personal laws also play a very important role in this. A woman needs to sustain herself after the divorce and hence for such reason, she is also entitled to receive maintenance under the provisions of the Criminal Procedure Code 1973.