Medical Negligence and Liability of Doctor in India 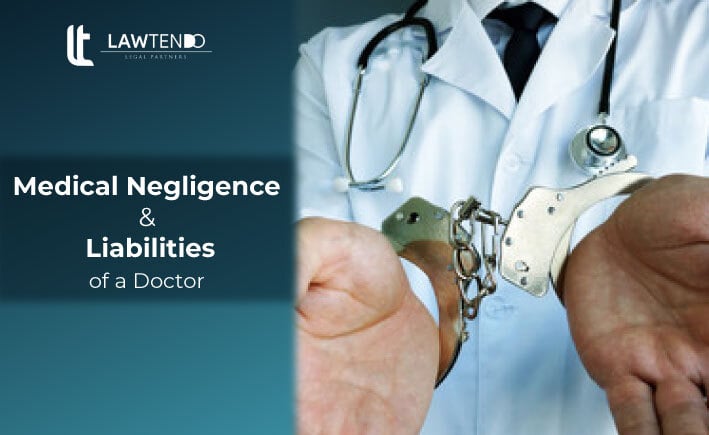 In every society, doctors are considered as God to save the life of patients. Whenever someone is having a health problem referrer to a doctor without hesitation. This trust when someone puts in other then it becomes its duty to keep that trust. The relationship between a patient and doctor is purely based on trust. However, if such trust is breached by any misconduct on part of the doctor and causes damage to its patient. Hence it is considered Medical negligence which is punishable under various laws such as torts, IPC, Indian Contract Act, etc. This could be by an act of commission or omission by the medical staff or doctor toward a patient.

The term medical negligence had two aspects with it. The first aspect is “Medical” which means providing health treatment to an ill person through a medical practitioner. Whereas negligence comes under tortious law. According to Winfield and Jolowicz, ``Negligence means the breach of a legal duty to take care which results in damage, undesired by the defendant to the plaintiff”. Thereafter the Medical Negligence means the breach of a legal duty by the medical practitioner or medical staff which results in damage to the health of the patient. This article also highlights the stands of count in various cases on the liability of a doctor for any medical negligence towards his patient.

The doctors are always presuming to act in good faith for the all-around well-being of his patient. Therefore, the law also protected the doctor from criminal liability through Section 88 to 92 of the Indian Penal Code, 1860 (IPC). The concept of Good Faith has a wider interpretation on the part of doctors or medical staff in medical negligence cases. The patient or member of his family has all right to take legal action against such malpractice against the doctor or the medical practitioner or the other medical professional involved in such kind of activities and can be sued in court. But it is also a side reality to prove that the injury occurred to a patient as a result of medical negligence in the court of law is very difficult.

Medical Negligence Definition: Medical negligence comes under the ambit of negligence which is a tortious offence. To understand medical negligence first we have learned about the concept of negligence and their essentiality of breach of duty. Negligence is the breach of duty by the person, who is trusted to perform such legal duty with care but results in damage to the plaintiff. It means a careless act or unreasonable conduct on part of the defendant. Therefore, Medical negligence due to Medical malpractices on the part of a doctor or any other medical practitioner for breaching its duty of not providing good medical treatment to patients which causes injury.

In general, the patient has the right to receive good medical care and facilities during their course of treatment. Hence, any misconduct, mistake, and negligence in that can also be charged in court.

The essential point of a Medical Negligence includes:

When a case is filed in court for medical negligence the burden of proof is on the plaintiff (patient or their family member) to show damages that are a result of the alleged negligent care on the part of the defendant (doctor).

Medical Negligence law in India: There is no legislation specifically to medical negligence in India. However, the judicial precedence by the court was acted to give compensation to the victims. The supreme court in its several important judgments has tried to define the Medical Negligence law in India. Medical Negligence laws in India are not only covered under the criminal liability of a doctor or other medical practitioner but also in the civil law as well as the consumer laws in India. The criminal liability has been covered under various provisions of offences in The Indian Penal Code, 1860 dealing with the punishments such as Section 52, 80, 81, 83, 90, 91, 92, 304(A), 337 and 338 relate to the law of medical negligence in India.

To understand through an example is the act of a cardiologist while treating his patient gives the overdose of anaesthesia for the operation. However, it results in the death of the patient thus the doctor will be charged with criminal negligence of IPC.

The above provision of IPC says that there is no difference between crime negligence committed by the doctor toward his patient and ordinary crime committed by a criminal, if such negligent act of doctor or another medical practitioner while treating his patient leads to his death or any injury was proved in the court this will recognize as the case of gross medical negligence.

Liabilities of Doctor under Medical Negligence: The liability of the doctor or other medical professional committing the wrong to his patient can be of three types depending on the nature of damage or injury suffered by the patient such as:

In certain situations when the patient has died just after the medical treatment due to the rash or negligent act by doctor or any other medical staff will be charged section 304A of IPC under the criminal case. According to section 304A- of IPC “whoever causes death of any person by doing any rash or negligent act not amounting to culpable homicide”, such person shall be punished with imprisonment of either description for a term which may extend to 2 years, or fine or with both

Liabilities under Consumer Protection Act- the medical negligence law cases were mainly covered under the Consumer Protection Act, 1986. This legislation highlights the problem faced by the patient during medical treatment services in the private hospital or public hospital. The patient gets compensation for any breach of contract during its medical treatment. The complaint under this act is filed by the aggrieved person in the consumer court. However, the burden of proof is on the aggrieved party to produce evidence in the court against the alleged breach of duty by the accused. Subsequently, if the substantial evidence were proved in the court, finally the matter is decided by the consumer court and the order is passed for compensation based on the complaint of the patient.