Punishment for Culpable Homicide not Amounting to Murder - Section 304 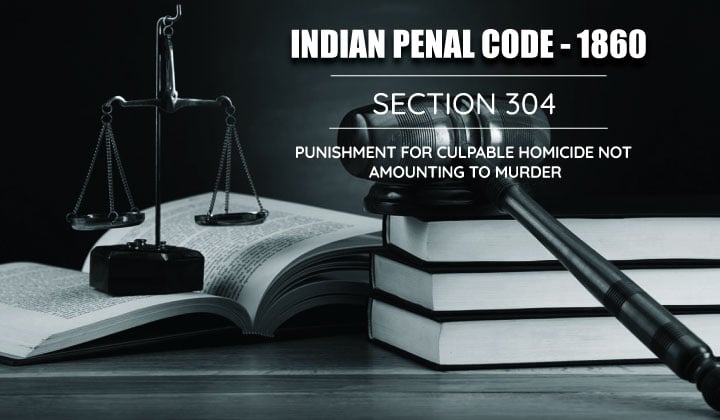 Chapter XVI of the Indian Penal Code deals with Offences Affecting the Human Body. It includes Culpable Homicide, Murder, Culpable homicide causing the death of a person other than the person whose death was intended, Causing death by negligence, Punishment for culpable homicide not amounting to murder, Abetment of suicide, Dowry death, etc. this chapter contains Section 299 to 377. This blog deals with Section 304 of IPC.

To understand this Section we need to first explain Culpable Homicide and Murder. As per Section 299 Whoever causes the death of a person by doing any act with the intention of causing death, or with intention of causing bodily harm which will cause death, or with the knowledge that it is likely by such act to cause death has committed the offence of Culpable Homicide. For eg. X knows that Y is behind the bush. A doesn't know this. X intends to cause Y’s death, which induces A to fire at the bush. A fires and kills Y. Here A is not guilty of any offence, but X has committed an offence of Culpable Homicide.

As per Section 300 Culpable Homicide amounts to Murder when:

Section 304 classifies the offence into two circumstances such as:

When Culpable Homicide is not Murder:

Culpable Homicide is not murder, if the offender loses his self-control by the grave and sudden provocation, and causes the death of a person who provoked him or any other person

For eg. Y gives sudden and grave provocation to A. A on this provocation, fires a pistol at Y, who never intended to kill Z, who was near him, but out of sight A kills Z. Here has not committed murder, but a merely culpable homicide.

Section 304 IPC can be tried in the Court of Session. The Ministry concerned with this offence would be the Ministry of Home Affairs and the department in this offence is the Department of Internal Security.

The accused were charged under Section 302 and 34 of the Indian Penal Code, on an allegation that the accused caused injury to Matal Kisku who died later at the hospital. Each one of them was sentenced to imprisonment for life under this Section. The facts of the case were that there was a dispute pending regarding the enjoyment of a Mahua tree as both were claiming to be the owners of the said tree. As a result of this quarrel, the deceased was beaten with lathi by the accused and injuries had taken place. later on, he was taken to the hospital. While undergoing treatment at the hospital he died. An FIR was registered and the investigation was conducted. The bamboo lathi was seized. The Court held that as per the facts above showed that there were a free fight and the deceased suffered injuries and in absence of any definite evidence as to who caused the injuries leading to the death of Matal Kisku, as we were unable to pin down the accused as guilty under Section 304 of the Indian Penal Code, as there is no evidence as to who caused the fatal injury during a quarrel. Therefore the accused were guilty under Section 324 and 34 of IPC, for which each one of them is sentenced to rigorous imprisonment of six months.

The facts of the case were that the petitioner was driving a bus of Maa Sharda Travels and as a result of his rash and negligent driving, committed an accident at Khandwa-Indore road near village Gavalu resulted in a head-on collision with Maruti Van. Due to this accident, three Maruti van passengers and two passengers of the bus had expired. The learned counsel for the petitioner in one of the cases such as State of Punjab v/s Balwinder Singh erred in framing the charge under Section 304 of IPC in a matter which is basically and normally a case of a road accident. The statements of some witnesses were recorded and said that the petitioner was under influence of the liquor at the time of driving. He was again and again requested by the passengers to drive slowly as it was injuring them. He drove the vehicle in a hurry so that the behind bus could not overtake him. It is pertinent to note that the Hon’ble Apex Court never made a distinction between the offence under Section 304 IPC as compared to the case of road accident under Section 304A. Prima facie in this case material is available to show the element of knowledge and the rest of the things are a matter of appreciation of evidence. No good ground is made to set aside the order framing of charges under Section 304 of IPC against the petitioner.

How can you file/defend your case for Section 304 of IPC?