Punishment for Criminal Conspiracy - Section 120B 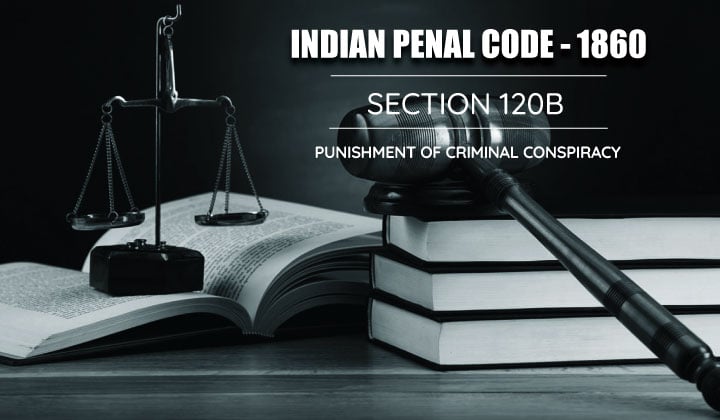 The Indian Penal code has given specific guidelines to be followed in case a person does something wrong. Various punishments for various crimes are explained in this code. This code not only punishes those persons who commit the crime but punishes even those who plan to commit such a crime. Such provisions are mentioned in the act so as to make the law more strict and secure. A person should always abide by the law and never misuse the law that is the major objective of it.

Basically, Indian Kanoon has also stated that if there is an agreement between two or more people to constitute a crime then such an act is punishable under Section 120B of IPC. Such a type of mutual contract or agreement between parties to commit a crime now or at a later date is known as a conspiracy. Hence, such a  conspiracy is a crime under the Indian Penal Code.

Such conspiracy to constitute a law is known as a criminal conspiracy and hence it is punishable under Section 120B of IPC.

What is Section 120B of the Indian Penal Code?

To understand this section, it is important to know the initial concept of Criminal conspiracy mentioned under Section 120A of the Indian Penal Code. Section 120 A of the Indian Penal Code states that: When 2 or more persons come together to constitute an act which is illegal and the motive of doing such illegal act is not considered to be illegal. For eg. A certain group of people plans to kidnap a child. Now, this act itself is illegal and it is obvious that for such execution of the plan, there are certain strategies involved such as from where to kidnap a child, who shall ask for extortion amount, and so on. Such an act is known as a criminal conspiracy which means an agreement among 2 or more persons to constitute a crime.

Punishment for such an act is mentioned in Section 120B of IPC and it states that:

The above two conditions explain that if a person carries out a criminal conspiracy shall be punishable with death, life imprisonment, or shall be liable for imprisonment for a term that may last at least 2 years. If there is no provision mentioned in the law, it shall be by default considered that the person has encouraged such offense and charged accordingly.

Also, a person shall be charged under this section if he is involved in any kind of conspiracy, not necessarily a criminal conspiracy. Even if the motto of the conspiracy is not successful, he shall be punishable with imprisonment for a term of at least six months which would last up to one year or with a fine or both.

To prove that a person is guilty of the offense mentioned under Section120B IPC, India ka kanoon has laid down certain conditions.

Essential Conditions to Prove a crime under Section 120B IPC

What is the punishment for IPC 120B Case?

In the event that an individual completes a criminal conspiracy will be culpable with death, life detainment, or will be at risk for detainment for a term that may last at any duration of at least 2 years. In the event that there is no arrangement referenced in the law, it will be of course thought to be that the individual has empowered such offense and charged likewise.

Likewise, an individual will be charged under this section in the event that he is engaged with any sort of connivance, not really a criminal trick. Regardless of whether the object of the conspiracy isn't fruitful, he will be culpable with detainment for a term of in any event a half year which would last as long as one year or with a fine or both.

How to file/defend your case for IPC 120B offense?

Steps for Filing the case

Step 2: Take the duplicate copy of the charge sheet and document the equivalent with the judicial magistrate of the first class.

Step 3: Magistrate will give the summons to the charge and the proceedings would begin.

For defending the case

In this case, the Supreme Court gave a landmark judgment in favor of the accused stating that there must be a group of people making an agreement to perform a criminal conspiracy. Hence, a single person cannot be charged with the offense of criminal conspiracy under this act.

This was also a landmark case in this the supreme court has come up with a set of conditions to constitute a conspiracy which is as under: