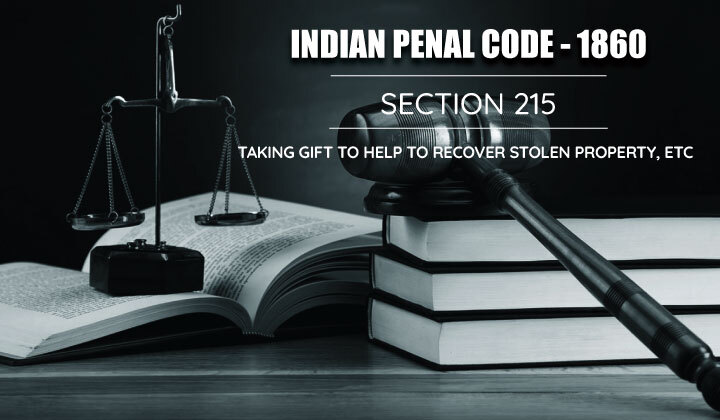 This clause punishes taking of gratification under the pretext of assisting a person in regaining property that he had previously been deprived of without apprehending the criminal who was responsible for the deprivation. Professional truckers collaborate with criminals who specialize in robbing others of their valuables through theft and other crimes. They then demand payment with the promise of the item being restored.

Under this clause, taking, agreeing to take, or consenting to take any gratification is treated equally, and the prosecution must establish at least one of these three. This must be done under the guise of reclaiming one's movable property that has been taken from him by another as a result of a Code violation.

If the accused establishes that he utilized every measure at his disposal to have the criminal captured and convicted of the crime that deprived him of his movable goods, his guilt under this clause is denied.

section 215 if IPC talks about Taking gifts to help to recover stolen property, etc whereas it explains the same as Whoever takes or agrees or consents to take any gratification under the pretense or on account of helping any person to recover any movable property of which he shall have been deprived by an offence punishable under this Code, shall, unless he uses all means in his power to cause the offender to be apprehended and convicted of the offence, be punished with imprisonment which may be extended to two years, or with fine, or with both.

The following are the essential elements of the Indian Penal Code's section 215 offence:

Yes, section 215 of the Indian penal code is a Bailable offence and a bailable offence is one that is included in the First Schedule or is made bailable by any other law in effect at the time. Murder, for example, is a terrible and dangerous offence that is subject to bail. Bail is claimed as a matter of right in cases where the offence is bailable.

What is the punishment for IPC 215 case?

Punishment for section 215 of IPC is sentence of up to two years of imprisonment, a fine, or both.

How to file/defend your case for IPC 215?

The finest criminal defence strategy is when the defendant and his or her counsel provide a tale that is founded on facts and portrays the defendant in the best possible light. A stronger depiction of a storey could result in a plea deal, a conviction on a reduced charge, or even a not guilty verdict.

State Of Rajasthan v. Khimla Sep 26, 1966: The State of Rajasthan has filed an appeal against the decision and order of the Munsif-Magistrate, Jalore, dated September 30, 1964, in which he acquitted respondents Khimla and Dalia for an offence Under IPC  215

The court observed that: There's nothing in this clause that says an actual thief can't be held liable if, in addition to committing theft, he tries to make money by promising to return the stolen item. This is a separate crime from stealing. There's no reason why a thief shouldn't be charged with another crime. The sole reason for this is that it is unnatural for a thief to utilize all measures at his disposal to cause himself to be captured and punished for theft. However, there is no exception in the section's language. The part of the section that really outlines the elements of the crime does not support the argument that the thief cannot be prosecuted under this section. The latter section of the section is more in the form of a concession in favour of someone who assists in retrieving stolen property and bringing the thief to justice, even if it is for personal gain. Section 215 of the Penal Code, in my opinion, can be used to condemn an actual thief or someone suspected of being the thief.

The exemption engrafted in the latter part of Section 215 of the Penal Code aims to cover a different situation in which a person acts in good faith to track down the thief or the stolen property, or both. To hold differently would be to provide an umbrella to actual or suspected thieves, protection that is meant for bona fide investigators who are covered by the section's latter part.

This article on IPC Section 215 is written by Mr. Abhinav Kumar, a Final year student at the University of Petroleum and Energy Studies, Dehradun.
TALK TO AN EXPERT LAWYER