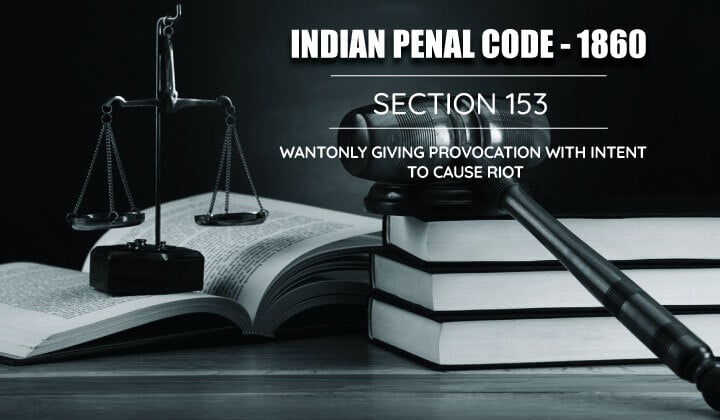 Deliberately giving provocation to something with the very intent to cause riot Anyone who deliberately by doing anything which is illegal, gives provocation to another person with clear knowledge for it to be likely that the provocation will eventually cause the offence of rioting and

Section 153A: To make an attempt to promote any sort of conflict or enmity between various groups on the basis of religion, place of birth, race, residence, language, etc., and doing certain acts that are prejudicial to the very maintenance of harmony.

Primary requirements to this section are:

Section 153A: Punishment given at moments when knowingly one carries arms in any sort of organizing or taking part in any mass drill or mass training

To carry arms being aware of it in any procession or voluntarily taking part in any mass drill with arms in a public space in contravention of any public notice or order issued or made under section 144A of the Code of Criminal Procedure could be punished with imprisonment for a term which may extend to six months and with fine which may extend to about 2000 rupees.

Section 153B: Whoever, by words either written or spoken or by signs or by visible representations or by any other means —

Anyone who commits an offence which is specified under sub-section (1), in any space of worship or any sort of assembly which engages in the performance of religious worship or religious ceremonies, shall be punished with imprisonment which may extend to five years and they will also be liable to fine.

In Offences that are Bailable, there is a grant of bail and it is considered a matter of right, where the arrested person is released after the bail is granted. It may be either given by a police officer who is having custody of the accused by the court. Both the punishment laid out Section 153 of the Indian Penal Code, promising imprisonment for the term of 1 year, or fine, or both and imprisonment for 6 months, or fine, or both are bailable under this section.

What is the punishment for IPC 153 Case?

A Cognizable Offence represents an offence wherein, in a case the police officer will have complete authority to arrest the person involved without a warrant. They are considered way more serious offences when compared to non-cognizable Offences. Section 153 including the two types of punishments which are Cognizable.

How to file or defend your case for the offence of IPC 153?

Defending the case under Section 508 of IPC: If the defendant is to defend their case against the accusations under Section 508 of IPC, then primarily he has to hire a lawyer and have them understand the circumstances of the case at hand, for the defense of any case, depends upon the circumstances of that case. A capable lawyer will assist you and defend your case by either lessening the sentence of your punishment or by getting you out of it.

Any famous judgment with respect to IPC 153 if any?

Aroon Purie v. HL Varma and Anr: The complainant in this is an advocate in practice in Bombay. It was alleged at the time that he is an ardent worshipper of Chhatrapati Shivaji, who was considered the very incarnation of God, sent to the earth to protect, preserve and propagate the Sanatan Hindu Dharma. India today, the magazine was accused of having organized a debate on the subject of 'secularism" in 1991. In the said debate prominent personalities of different walks of life included great personas like Bipan Chandra, Sitaram Ycchuri, Jawed Habeeb, Girilal Jain, Swapan Dasgupta, Arun Jaitley. Ashis Nandy, Khushwant Singh, Jaswant Singh participated. Arun Purie (the petitioner) had chaired this said debate in which every one of the ones who had participated had expressed their views about the subject 'secularism'. According to the petitioner, there were certain remarks made by one of the accused who had committed an offence under Section 153 of the IPC and other remarks that were made by the speakers as well and it had featured in the issue of “India today” published. These were the facts of the case. But the court held that there was no such offence that happened and the accused were held not guilty.

Dr.Anbumani Ramadoss vs State Of Tamil Nadu: The petitioner, in this case, had given a statement in the press meet, as if some people, having abused other caste people, were freely moving in the society. In view of this statement, there was a communal tension, which culminated in a riot, resulting in immense damage to the Government buses and also leading to many other deaths, one of a lorry driver. An FIR was registered against the petitioner for the offences under Sections 153 and 153(A) of IPC. The Court had held the view that when a person is expressing his dissent for non-action of the Government against certain bad elements that such statements cannot be construed to mean that it in any way instigated violence or gave provocation with intent to cause a riot.

This article is drafted by Ms. Archana Nair, from Alliance University.
TALK TO AN EXPERT LAWYER