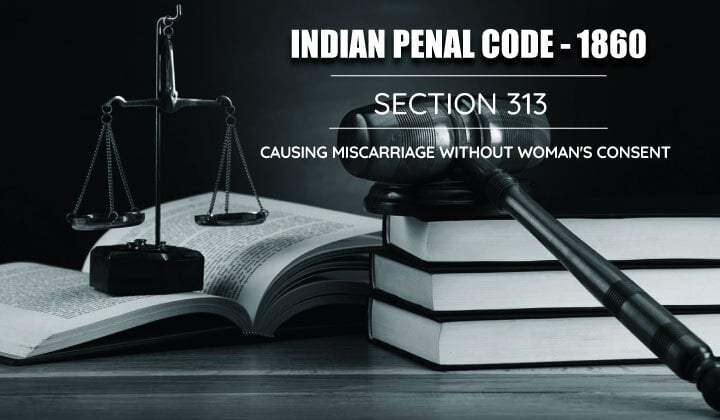 Becoming a mother is just like a dream for every woman. Having a child of your own, taking care of that baby, watching him/her grow. It is the best gift any woman can get. But when this is the result of some hideous incident, it becomes a constant reminder about that horrendous situation. Society has set some norms for women that if she has conceived before her marriage then she has lost her virtue, freedom, character, some might even say her entire life has gone for a toss if she has been a victim to rape, domestic violence, or any such crime. It is the mother’s basic and personal right that if she wants to give birth to the baby or abort it. In India, revealing the gender of the baby is banned, but still, some hospitals practice which has resulted in the killing of foetus who was a girl. This is done even without discussing it with the mother. To keep this incident at bay Indian Penal Code has section 313 which deals with the miscarriage of an unborn baby without the consent of the mother, people found guilty are sentenced to life imprisonment or what the Court seems fit.

Section 313: According to section 313 of the Indian legal code, Whoever commits the offence defined within the last preceding section without the consent of the lady, whether the lady is quick with a child or not, shall be punished with imprisonment for all times, or with imprisonment of either description for a term which can reach ten years, and shall even be liable to fine.

In simple words, it's mentioned that whosoever commits the offence of miscarriage without the consent of the women whether such women was quick with the child or not. Such a person shall be punished with life imprisonment or with imprisonment which may extend to 10 years, and shall also be liable for a fine.

Punishment for Section 313: Section 313 deals with miscarriage without the consent of the mother. The accused shall be punished with life imprisonment or imprisonment extending up to 10 years and will be liable for a fine based on the decree of the Court.

The cognizable offence is defined as an offence where a policeman can arrest a private without a warrant. After the arrest has been made, the accused are getting to be presented before the Magistrate within 24 hours. The offence mentioned above is a cognizable offence.

How to file/defend your case for Section 313 offence?

Defending one’s case during this matter won’t be easy. The onus lies to the accused as he/she is found guilty during the investigation and possesses to prove his/her innocence in Court. But if the prosecution or defense has strong arguments and vital evidence through which it is often observed that this executor deliberately caused damage and features a malicious intention. The fallacious are punished as the Court deems fit.

Hasi Mohan Barman & Anr vs State Of Assam & Anr, 2007: This appeal has been preferred against the judgment and order dated 2.1.2007 of Gauhati supreme court by which the appeal preferred by the appellants was disposed of with the modification that the sentence of five years R.I. and fine of Rs.7,000/- imposed upon each of the appellants under Section 313 read with Section 34 IPC by the learned Additional Sessions Judge, Kokrajhar, was reduced to three years R.I. and fine of Rs.5,000/-. The case of the prosecution, in brief, is that the appellant Hasi Mohan Barman was having a romance with the primary informant Haleswari Barman, which subsequently developed into a physical relationship and as a result thereof she became pregnant. The villagers put pressure upon Hasi Mohan Barman to marry her which he declined. He asked her to abort the kid which she refused to try to do. Thereafter, on the night of the incident Hasi Mohan Barman took her, Haleswari Barman to the pharmacy of co-accused Abinash Biswas, who administered a certain injection whereupon she became unconscious and the child was aborted. She was administered Saline and thus the appellant Hasi Mohan Barman kept her at 'Pampghar' for about nine days wherefrom she was taken to her parent’s house. After a few days, Haleswari Barman lodged an FIR against both the appellants. The police, after investigation, submitted a charge sheet only against Hasi Mohan Barman but subsequently, co-accused Abinash Biswas was also summoned under Section 319 Cr.P.C. to face the trial.

The High Court, after a thorough examination of the evidence, has recorded a finding that she was pregnant through the appellant Hasi Mohan Barman who wanted her to abort the child. As Haleswari Barman declined to try to do so, Hasi Mohan Barman with the assistance of Abinash Biswas caused a miscarriage of the pregnancy without the consent of Haleswari Barman. The supreme court accordingly held that it had been established beyond any shadow of a doubt that both the appellants had committed an offence under Section 313 IPC. The supreme court thus maintained the conviction but reduced the sentence from seven years R.I. and a fine of Rs.7,000/- to 3 years R.I. and a fine of Rs.5,000/- of both the appellants.

Section 320 of the Code of Criminal Procedure says that the offences punishable under the sections of the Indian legal code (45 of 1860) laid out in the primary two columns of the table next following could also be compounded by the persons mentioned within the third column of that table. A perusal of Section 320 will show that the offence under Section 313 IPC isn't compoundable. Therefore, the consent given by the wife Haleswari Barman, or the affidavit filed by her cannot be utilized for the purpose of recording a finding of acquittal in favor of the accused appellants. There are several other decisions of this Court wherein the factor of compromise has been taken into consideration and the sentence has been reduced mostly to the period already undergone and they are Bankat and another vs. the State of Maharashtra (2005) 1 SCC 343, Badrilal vs. the State of M.P. (2005) 7 SCC 55 and Jetha Ram and others vs. the State of Rajasthan (2006) 9 SCC 255. Following the view taken in the above-noted cases, we are of the opinion that the complainant and the principal accused having already married will be in the interest of justice if the sentence is reduced to the period already undergone. The appeal is accordingly partly allowed. The conviction of the appellants under Section 313 IPC is maintained but the sentence is reduced to the period already undergone which appears to be about ten months. The fine imposed upon the appellants is also set aside. The appellants are on bail. Their sureties and bail bonds are discharged.

Conclusion: This kind of behavior needs to stop as soon as possible. It is taking the nation’s youth in a false and untrue direction, which will result in a very bad condition in the near future. Women should be given their right to choose whether she wants the baby or not.