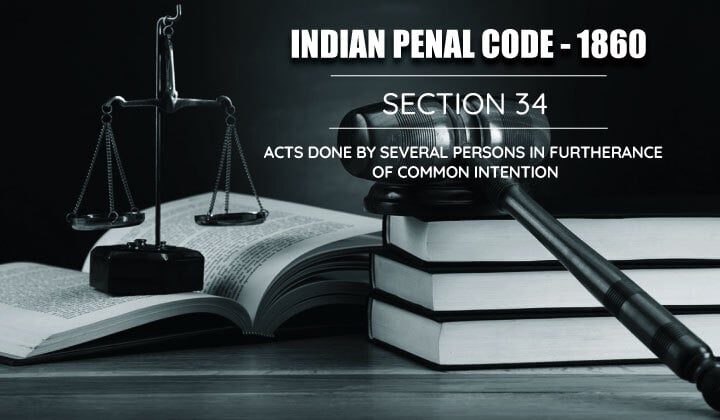 Criminal intent is the greatest type of criminal liability of men’s rea. In Criminal law, the intention occupies a symbolic position. It refers to murder and the most serious type of crime in the criminal justice system as the largest type of mental component. The word ‘intention’ is still not described under IPC, but Section 34 deals with common intention.

Section 34 of IPC,1860 is relating to “Acts committed by several persons in furtherance of common intention.

According to this section if two or more people commit a criminal offence with the intent of committing that offence, then each of them will be held liable for that act as if it were committed by them individually.

The objective of Section 34: Section 34 is aimed to deal with a situation in which it may be difficult to distinguish between the criminal acts of individual party members acting in favor of a common intention of all, or to prove precisely what role each of them took.  The reason why all are found guilty in such cases is that the existence of an accomplice provides help, encouragement, safety, and trust to an individual who is truly involved in an illegal act. Thus, every person who is involved in the commission of a criminal offense is held liable by virtue of his participation in the act performed, even if the specific act in question was not performed by either party of the group.

Need for Section 34 IPC - Section 34 of the Indian Penal code lays down a general provision for application in situations where it is difficult to prove the exact extent of liability and roles of the persons involved in a joint criminal act. It helps in determining liability for individuals where it is tough to determine individual liability for acts done in furtherance of the common intention of all those involved.

Punishment for offence under IPC 34: Since Section 34 only provides a general definition of what constitutes joint liability, no proper punishment has been stated for criminal acts committed jointly by two or more two people in pursuance of common intention. This Section is merely a rule of evidence per se. This does not create any substantial offence.

Section 34 on its own does not constitute any explicit or distinct offence and lays down only a principle of liability stating that if two or more than two people do something against the law, or something that is a crime under the IPC, both (or all of) such persons will be held liable for that crime. Thus, the punishments for Section 34 will be in accordance with the punishments provided for the crime committed as per the IPC.  Since Section 34 cannot be an offence in itself, thus each time a criminal act is done by two or more persons both the Sections i.e. section provided for the criminal offence, and section provided for joint liability (Section 34) will be applied.

For example, If a murder is committed in furtherance of a common intention, then both persons involved will be held liable under Section 302 of the IPC along with Section 34 of the IPC.

Section 34 does not specify one substantive offence and is a general provision for any offence committed in furtherance of common intention. Thus, whether one can get bail as a matter of right or not depends upon the offence for which the accused is charged under.

For example, if the accused is charged for murder, then, the accused will not get bail because Section 302 of IPC (i.e., murder) is not a bailable offence. Similarly, if the two or more persons are charged for an offence which is bailable, then the accused will easily get bail, depending upon the facts and situation of each case.

How to file or defend your case for IPC 34 offence?

The beginning of a trial court procedure for a criminal case depends upon whether it is cognizable or non-cognizable offence and that depends on the crime that has been committed. Since Section 34 is a general provision, without any substantive offence, the trial or a criminal court procedure will depend upon the other Sections of the IPC under which the accused has been charged. However, Registering an FIR at the nearest police station sets the motion of a trial.

How to defend: Being charged under any crime is a serious matter to deal with. It is not only hard for the accused, but also for the victim. A person charged for a crime has to face harsh penalties if convicted. Therefore, it is advised to hire an expert lawyer who has experience in dealing with criminal cases. The lawyer will be able to guide you on the available defences, pleas and bargains likely to be offered and the expected result of the trial, depending upon the facts and circumstances of the case.

A criminal lawyer with substantial experience in dealing criminal cases can guide you through the court procedure and can help you in preparing a solid defense for the case. He can also prepare you for cross-examinations and guide you on how to answer the prosecution’s questions.

Important Judgment: Barendra Kumar Ghosh v. King Emperor (1925) 27 BOMLR 148: Several people appeared before the sub-postmaster who counted the cash on the table and demanded money. They shot at the postmaster from the pistol, causing the death of the postmaster on the spot. They run away Without taking any cash. However, The police were able to catch Barendra Kumar Ghosh who stood outside the post office. He was prosecuted under Sections 302 r/w section 34 of IPC. Barendra contended that he was just standing outside as a guard.

The trial court, after being satisfied that the sub-postmaster was murdered in support of the common intention of all, held the accused guilty even though he had not fired the shot. The Calcutta High Court and the Privy Council both agreed with the decision of the trial court and found the accused guilty of murder. Section 34 deals with the performance of separate acts, similar or diverse by several people, if all are performed in the pursuit of a common intention, each individual shall be liable for the consequences of all such acts as if they were done by themselves.

Mahboob Shah v. Emperor, (1945) 47 BOMLR 941: Appellant Mahboob Shah was convicted of the murder of Allah Dad by the Session Judge of the charge under Section 302 with Section 34 of IPC. The Session tribunal found him guilty and sentenced him to death. The High Court of Judicature upheld the death sentence as well. On appeal to the Lordship, the murder conviction and death sentence was overturned. It was argued that “when Allah dad and Hamidullah tried to run away, wali shah and Mahboob shah came next to them and fired and thus there was proof at the spur of the time that they formed common intention.

The lordship was not happy with this perspective and advised his Majesty that the appeal must be allowed and the conviction of him for murder and death sentence should be set aside.

Get in touch witht the best lawyer online

Rangaswamy vs. State of Tamil Nadu AIR 1989 SC 1137: In this case accused no. 3 was convicted by the trial court for committing offences contrary to section 302 r/w section 34; section 307/ 34 and section 506 of IPC. He came to the Supreme Court with the pleading that he was only on friendly terms with accused no. 1 & accused no. 2 and he did not share any common intention with them to kill the deceased or to attack the deceased companion. Further, he said that it was by chance that he was present at the place of offence and he had not engaged in the commission of the offence. The accused no. 1 had a prior enmity with the deceased as he was accused of murdering the brother of accused no. 1 and then released on bail. The occurrence of crime took place in the market. The court held that presence of accused no. 3 at the place of the offence was established but there is no evidence to show that he shared a common intention with the other two accused. The Supreme Court acquitted accused no. 3 of all the charges.