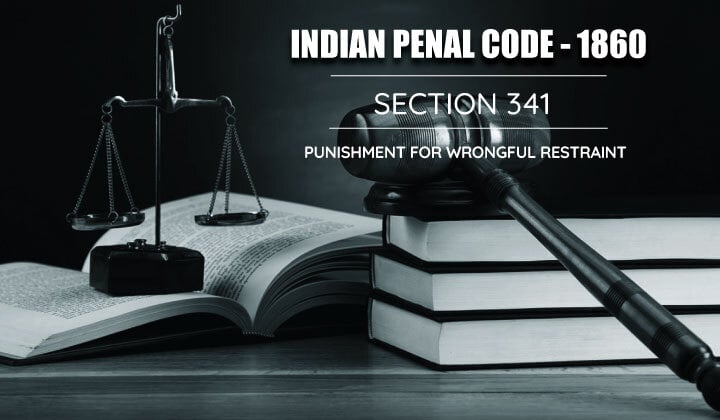 Wrongful Restraint: Section 339 of the Indian Penal Code talks about wrongful restraint, according to this section if a person obstructs another person from going in any direction that person has the right to go is wrongful restraint.

Obstruction: Obstruction means when a person blocks another person from going somewhere by using physical force or by threatening that person. When this obstruction is voluntarily and wrongfully it is called wrongful restraint.

Ingredient: In this section, there are certain key points that are required to consider the crime as wrongful restraint which is as follows:

What is the Punishment for Wrongful Restraint?

Wrongful Restraint is a bailable offence.

Wrongful Restraint is a cognizable offence.

Emperor v. Ramlala: In this case, the Bombay High Court discussed whether the obstruction caused for vehicles having passengers can amount to wrongful restraint or not? Court held that if the person or persons sitting inside a vehicle or on a vehicle and the path is obstructed by someone but the person can walk and go without any hindrance then it won’t amount to wrongful restraint.

Gopal Reddi v. N.Lakshmi Reddi: In this case, Court held that if someone voluntarily obstructs a cart having passengers or people traveling is wrongful restraint, and the fact that the people sitting on the cart have the option to get down and walk without any hindrance or peacefully is immaterial.

In re M. Abraham: In this case, a bus driver intentionally stopped the bus in a way to obstruct the path or road so that the buses behind him cannot move further or to stop the buses behind him from proceeding in their direction. The court held him guilty under section 339 of the Indian Penal Code.

Conclusion: Hence it is concluded that when someone voluntarily obstructs the path or obstruct the person from moving in any direction where that person has the right to go through physical force or threat is wrongful restraint and the person committing the offence is liable to be punished with imprisonment for up to one month or fine up to five hundred or both.