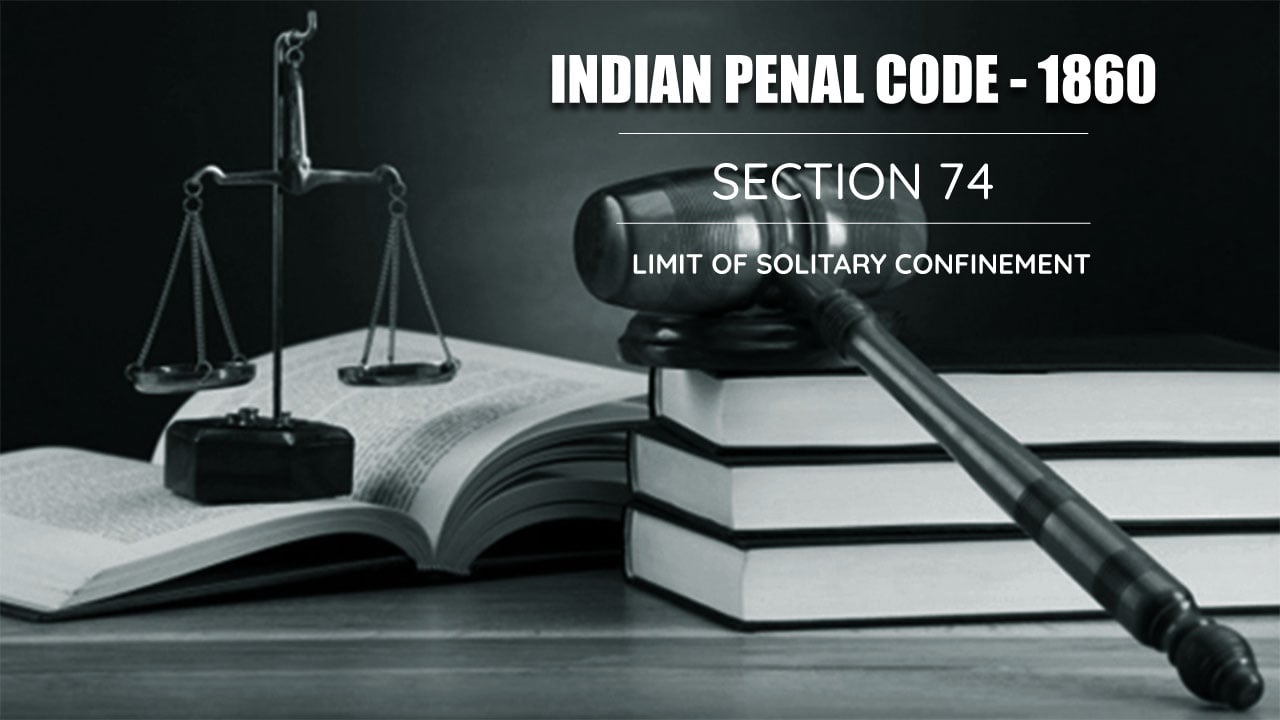 The Indian penal code provides the general penal code for India. The code came into force on January 1st, 1860 after undergoing many revisions and amendments The Indian Penal Code of 1860, subdivided into 23 chapters, comprises 511 sections. The code contains introduction and also provides explanations and exceptions used in it, and covers a wide range of offences.

The IPC through its sections defines specific crimes and punishments imposed for them. It is subdivided into 23 chapters that comprise 511 sections.

Section 74 is contained in chapter III of the IPC dealing with punishments. Chapter III of the Indian penal code contains sections 53 to 75. The provisions of these sections deal with punishments. Under the sanction of the law, punishment is retribution on the offender to the suffering in person or property which is inflicted by the offender. Punishment is used as a deterrent through which an offender can be stopped from doing offences against society, person, property, and government. Punishment can be classified into different types: deterrent, rehabilitative, restorative and retributive.

Punishment is an act by which the state imposes some pain to the person or property of an offender who is found guilty of a Crime. Punishment is the sanction imposed upon an accused person for infringing the established rules. The Object of Punishment is to protect society from mischievous and undesirable elements punishing potential offenders, by preventing the habitual offenders from committing further offences, and by reforming and turning them into moral citizens. The provisions of section 74 specifically deal with the limits of solitary confinement.

During Solitary confinement the imprisonment characterized by imprisonment in a single cell with little or no form of contact with fellow inmates, strict measures are in place to restrict contraband, and the imposition of additional security measures and equipment. It is designed for inmates who are disruptive and those who are security risks to other inmates, the prison staff, or the prison itself — but can also be used as a way to protect jail inmates who have  threats from other inmates.

So in solitary confinement is a sort of confinement where a detainee is disconnected from any human contact, regularly aside from people from prison staff, for 22–24 hours out of a day, with  sentences ranging from days to decades. This kind of confinement is very intensive on the prisoner. The physiological effect of this order impacts the minds of rebuked individuals.

Section73 states that  any person who is convicted for an offence  which under this Code which the  Court has the power to sentence him to rigorous imprisonment, the Court may impose sentence and order that the offender should  be kept in solitary confinement for any portion or portions of the imprisonment for which he is sentenced, not exceeding three months in  whole, as per the following scale, that is to say:

For a period not exceeding one month if the punishment of imprisonment shall not exceed six months;

For a time which shall not exceed three months if the term of imprisonment exceeds one year.

In India, every prisoner has certain basic essential rights that are secured by the constitution of India. Certain articles in the Indian constitution confer rights to prisoners such as the right to be liberated from cruel and abnormal punishment and other disciplines. According to these articles and provisions, prisoners get specific rights as any other typical persons get when they are inside the jail. The Constitution of India and the Prisons Act, 1894 confers these rights to prisoners. Prisoners are also human beings with flesh and

The blood they have a few rights and don’t lose their regular established rights.

So if we analyze the provision of the constitution, According to Article 14 of the Constitution of India which provides that, the State shall deny any individual their equal security of laws inside the territory of India. Article 14 is important for all citizens of India and it is the reason for the jail specialists to decide the assortment of detainees in the jail.

Article 19 of the Constitution of India provides for six freedoms for the citizens of India. Each of these freedoms contains freedoms that are not permitted to the prisoners.

According to Article 21 of the Constitution of India an individual will not be denied of his life or  freedom with the except on strategy set up by law. Thus these Articles engage the ideas of the right to life and liberty.

Article 21 of the Indian Constitution is applicable to common citizens as well as individuals who are behind the jail. Certain decisions of the court also provide for the  right of prisoners.

It was held in the State of Andhra Pradesh v. Challa Ramakrishna Reddy that the prisoners are entitled to all his rights except freedom which is decreased. The Supreme Court held that a prisoner  who is in jail is an individual and citizen and  upheld all his rights provided by the Constitution of India.

and spending almost 8 years in solitary confinement illegally is a violation of the provision of Article 21 of the constitution. The Prisons Act, 1894 is India's first legislation on prison governance in India. The focus of the legislation is primarily concentrated in rehabilitating inmates according to their rights. The prisons of India have been reformed as per the provisions of the prisons act. The prisons contain provisions for the rights of inmates there living conditions and other human rights. The act provides for the procedure to be followed while putting a prisoner in solitary confinement and the  conditions to be provided in such a cell.