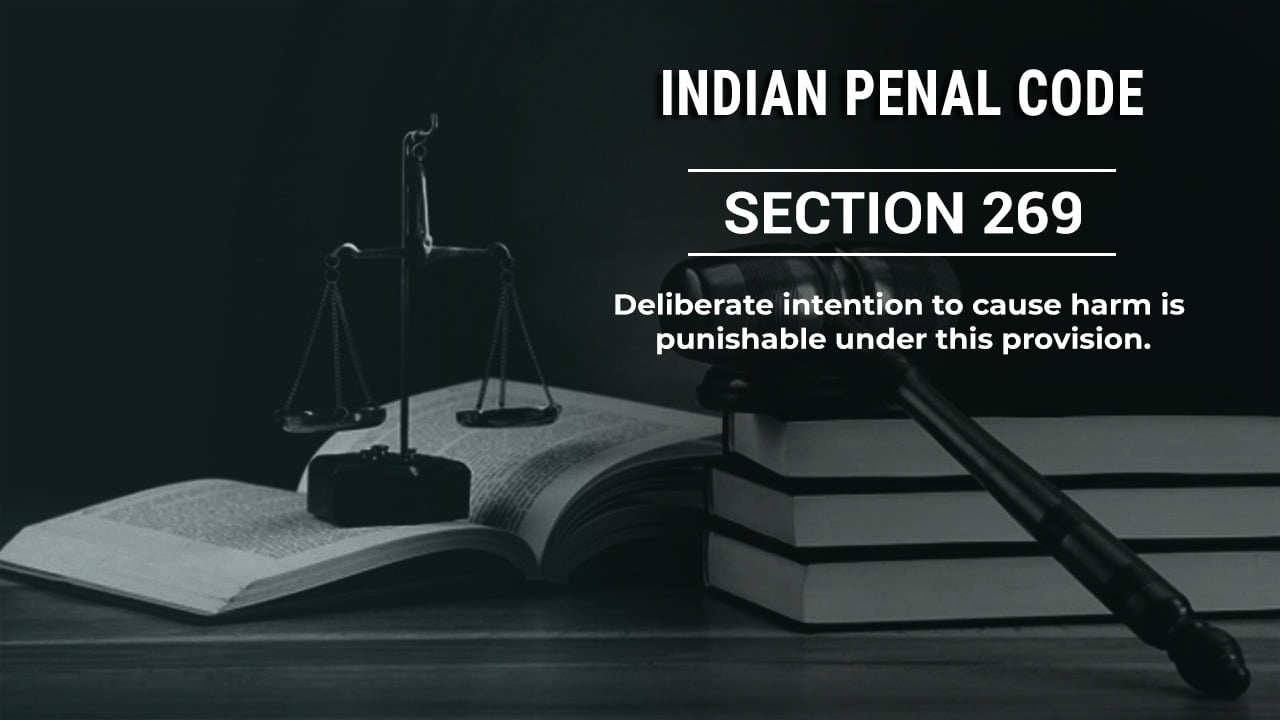 India is striving its best to promote, advocate, practice cleanliness in the country with schemes such as Swachh Bharat, we are fighting people who urinate, litter, or defecate in public to ensure the same, Indian Penal Code has provided chapter 14 which deals with offences which affect Public Health, convenience, decency, and safety. It not only helps to maintain and ensure cleanliness but causes a change in the attitude of people who have normalized such acts in public.

Furthermore, given the unprecedented pandemic challenge around the world this chapter 'section 269 is also employed against persons which do not wear masks in public areas and are gathering in public places despite government order of night curfew or lockdowns. This section prevents the individuals from spreading deadly diseases which can cause widespread infections, threatening the lives across the community. This pandemic let's try to understand section 269 IPC.

Consult with the best lawyer online

Section 269 IPC: Under chapter 14 of the Indian Penal code (IPC) section 269 states the punishment for negligently or unlawfully committing an act with the intent to spread infection of any life-threatening disease.

What is the punishment for IPC Section 269 case?

For violation of IPC section 269, the offenders attract maximum imprisonment of 6 months or fine or both.

According to IPC first schedule, the nature of section 269 IPC is as follows -

Bailable offence means that the accused of this offence can claim bail as a matter of right. It may be provided by the court or the policemen which have the accused's custody.

Cognizable offence means that the police don’t require a warrant which is often provided by the court, to arrest the accused of such offence.

A non-compoundable offence means it is a less serious offence that can be compromised, that is the complainant may take back the charges anytime against the accused without the intervention of the court.

In what court can IPC section 269 be tried?

The offence under Section 269 is triable by any Magistrate.

Some famous judgments: The interpretation of the ingredients of section 269 may be borrowed from the following cases -

Contentions of defendants -  the accused were asymptomatic of COVID - 19 at the time of their evacuation from Markaz premises therefore they were not likely to spread that deadly disease.

The decision of the court -

In their cases of Vikram Singh vs State & Anr, Rajasthan High court 2017

Facts - the accused was alleged to have been suffering from a plethora of diseases and was operating flour and spices mill and thus was conducting an act which is likely to spread diseases which were dangerous to life with the knowledge. And was charged under IPC Section 269.

Contentions of the respondent - the Act of Petitioner was illegal as the accused is not legally entitled to run the mill in question.

Further, the accused causes tuberculosis to the family members of the respondent. Learned counsel for the respondent and thus further tuberculosis is indeed an infectious disease which is dangerous to life coming under their ambit of IPC Section 269.

The decision of the court -

How can you file your case for the IPC Section 269 offence?

If there is a violation of Section 269 the concerned victim should first report the same to the nearest police station and lodge an FIR regarding the same without any cost.

Or else for more convenience E- FIR can be filed since Section 269 is a cognizable offence.

After completion of the charge sheet the matter is pursued as a trial in the court with the prosecution establishing the ingredients of section 269 and if successfully done then the accused may be imposed with imprisonment up to 6 months or fine or both depending upon the discretion of the court.

How can you defend your case for the IPC Section 269 offence?

In the case of the accused, the accused can firstly apply for bail through a lawyer and since it is a bailable offence the bail will be granted by the court or the police.

Further, the accused through a lawyer have to defend the matter and prove that there was no intent or belief to spread any dangerous diseases by the acts alleged in the cases.

Further, the lawyer will draft a petition for bail or for defending the accused in the trial or on behalf of the victim can file a petition for proving the ingredients of section 269 before the judge or provide assistance for filing FIR online.