Voluntarily Causing Hurt to Extort Property, or to Constrain to an Illegal Act Section 327 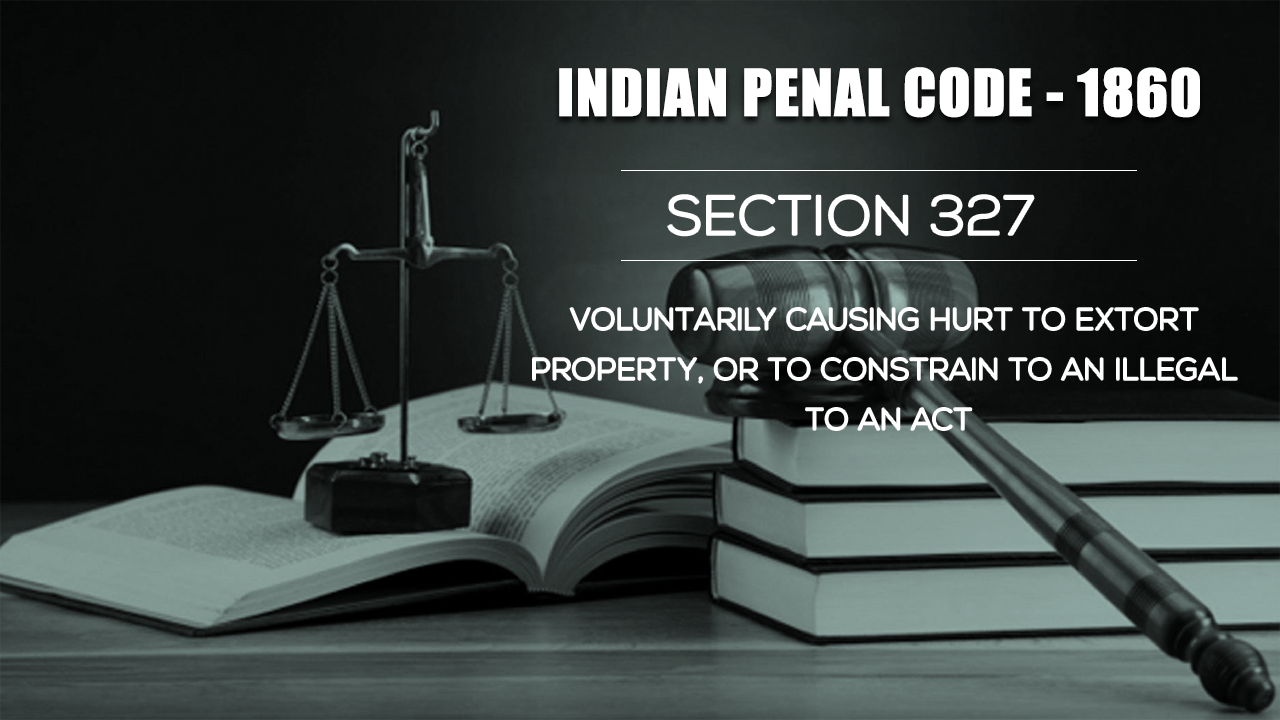 There are various provisions in the Indian Kanoon stating punishments for the various wrongful acts committed by the wrongdoers. The punishments for the laws related to criminal offences are stated in the Indian Penal Code,1860. The Constitution of India provides rights and powers to the citizens of the country. The Indian Penal Code states the punishment for an infringement of these rights of innocent people and for the offenders doing criminal acts by misusing their powers to dominate the victims and violate their rights.

Chapter XVI of the Indian Penal Code deals with the offences affecting the human body by causing hurt or grievous hurt. The term ‘hurt’ can mean either bodily pain, infirmity or disease. If someone does such an act to a person by which the latter ends up damaging one of his organs of the body or gets a disease or he suffers from some bodily pain then it constitutes ‘hurt’. Sections 319 to 335 of the IPC deal with provisions related to hurt. In this blog, we will discuss all Section 327 of IPC.

This section deals with the provisions and punishment of ‘Voluntarily causing hurt to extort property, or to constrain to an illegal act’. If a person voluntarily, with intention and knowledge of his actions and the consequences, hurts someone else to extort property or to constrain him to an illegal act against their will, the person will be liable under Section 327 IPC.

The commitment of an offence under this section leads to imprisonment which may extend up to 10 years and shall also be liable to a fine.

IPC 327 can be tried in the Court of Magistrate of First Class by the Trial Court – Court of Session. The Ministry concerned with this offence would be the Ministry of Home Affairs and the concerned department in this offence is the Department of Internal Security.

In this case Gopal Giri, the victim/complainant was fetching water from a public tap at 12 in the night during the Nav- Durga festival. The applicant came up to him and asked for his cycle. When Gopal refused to give his cycle to him, the accuser got annoyed and caught hold of his neck and started abusing him. The incident was witnessed by Lala Srivastava, Kundan Singh, and some others as well. He threw him on the ground and even bet him with a lathi(stick) as a result of which the victim had 8 bruises on his lower back, left hand, left arm, right buttock, right thigh, the right side of neck, left buttock and left knee joint.

This case seems to be coming under Section 327 IPC but the court gave the judgment that this offence would be convicted under Section 323 of IPC and would not be punishable.  The applicant does not seem to have caused harm to the victim in order to extort his cycle, but he was annoyed and angry when the victim refused to give him the cycle and harassed him because of that annoyance.

In this case, the prosecutrix complaint lived with her mother, and younger brothers. One night when her brothers were not present in the house, her stepfather and her two stepbrothers along with three other men barged into their house and started abusing her mother to withdraw all the cases filed by her against the stepfather. He started misbehaving with her and her mother. The stepbrothers started molesting her and threaten to rape her if the cases were not withdrawn. The mother called up the police and on knowing this they ran off by giving a threat that they would kill her and her daughter. At first, the case did not feel suitable for Section 327 as there was no actual extorting of money, but later it was argued. The judgment given was that this is convicted under Section 327 of IPC as the hurt was voluntarily caused for the purpose of constraining the sufferer to do an illegal act, which in this case was to withdraw the pending cases against the accused person.

How can you file/defend your case for the IPC  Section 327 offence?

Through Lawtendo you can connect to an appropriate lawyer for filing or defending your case for the offence under Section 327 of IPC. We, at Lawtendo provide around 15000+ lawyers all over the country on our online platform. Lawtendo strives to facilitate legal services that are consumer-oriented,i.e, cost-effective and quality legal service.