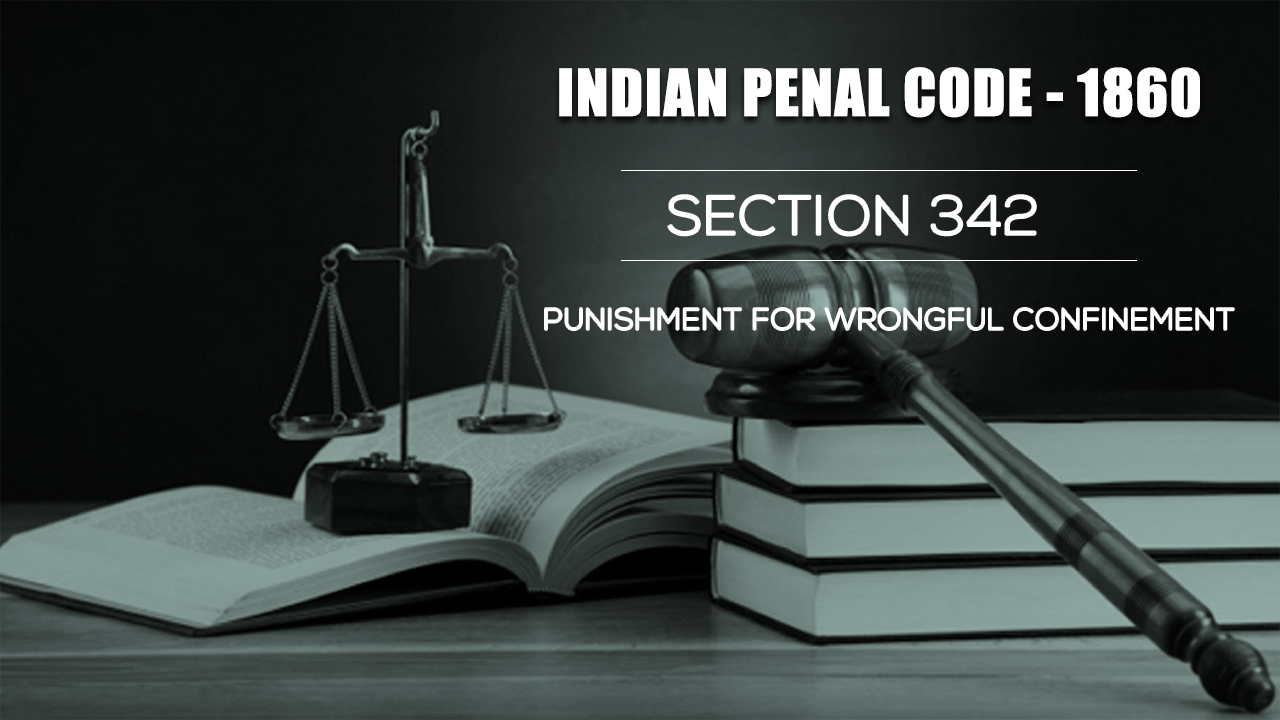 There are various provisions in Indian Kanoon stating the various punishments for any wrongful activity performed and it aims at giving justice to the victims. The provisions are mentioned in a coded set of instructions known as the Indian Penal Code. All the crimes are given proper provisions related to any kind of offense by the accused. So, according to the Indian Penal Code, there must be a ‘concept of guilt’ in the mind(mens rea) and the act done should be wrongful according to the law (actus rea) present to prove or define it as a crime.

Section 340 to Section 348 of the Indian Penal Code are also important provisions. They talk about the concept of confinement which is wrongful according to the law and its relevant punishment.

Section 342 of the Indian Penal Code mentions certain provisions for the punishment related to the case where there is any kind of wrongful confinement.

For example, Mr. C comes with goons outside Mr. A’s house and states that if he leaves his house, the goons will beat him. In this case, Mr. C has wrongfully confined Mr.A.

Hence, Section 342 has provided the punishment for such wrongfully made confinement according to India ka kanoon.

Section 342 states that if a person is wrongfully confining any other person, then he/she is liable to punishment.

But, there are certain criterias mentioned in IPC to determine if the person is wrongfully confined or not.

The system for change of a situation of improper repression will be discovered under Section 342.

Following are the criteria to determine wrongful confinement:

1.The person must be wrongfully deprived from his personal liberty without any lawful clarification for the same.

2.Such a type of prevention must prevent any person from going away from procedures past certain delineating limits.

In wrongful restriction, there is just a fractional suspension of one's freedom or movement, while in wrongful imprisonment there is a complete suspension of freedom past certain delineating limits.

3.The detainment of the individual wrongfully restricted should be compulsory detainment. It means,The person whose personal liberty is affected, should be damaged, without his consent.

4.Detention through the activity of moral power, without the backup of actual power or real clash, is adequate to comprise wrongful confinement.

5.The time during which an individual is kept in unfair constrainment is irrelevant, besides concerning the degree of discipline.

6.Any kind of malice is not to be considered as an essential factor to constitute wrongful confinement.

For example: if a person intentionally locks another person in any walled and closed room, kept from continuing toward any path past the surrounding boundaries of that room, then it is called wrongful confinement.

Is Section 342 of IPC bailable?

IPC or the Indian Penal Code states that the offense of wrongful confinement is a bailable offense.

Also, it can be compounded by any person who is restrained or wrongfully confined.

IPC states that an offense under Section 342, is a cognizable offence.

This section states that it can be trailable by any magistrate under whose jurisdiction such confinement has occurred.

Section 342 can be explained more with the help of many landmark judgments.

What are the famous judgments under section 342?

In this case, Person 1 brought a lady who was his kept paramour, from Kolhapur and kept her with Person 2, a whorehouse manager in Bombay. In past events additionally, he had provided ladies to be utilized as whores. The lady was made to live as a whore in the house, the passageway to which was monitored, and a watch was kept over her developments. Only on specific events was she permitted to go out under observation. Hence, Both persons 1 and 2 were liable under Section 340 of the Code and Punishable under Section 342 IPC.

An enormous number of workers gathered around the administration staff without giving them the opportunity to move above and the actual bar of an objective, either by encompassing expected to bar the entrance or departure from and to a specific office, work environment, and so forth was held to be illicit adding up to the criminal offenses of unfair restriction and improper constrainment.

These were some of the landmark judgments with respect to the Section 342 of IPC.

What is punishment under Section 342?

Section 342 states the punishment of the offense made under wrongful confinement. The punishment awarded is as under:

“Whoever unfairly limits any individual, will be rebuffed with the detainment of one or the other depiction for a term which may reach out to one year, or with a fine which may stretch out to 1,000 rupees, or with both”.

What offence is defined under IPC 342?

Section 342 talks about the punishment for the offence of wrongful confinement. It is one of the important provisions of IPC which states the punishment for such confinement made. This offense is cognizable, yet requests ought to be conventionally issued in the primary example. It is bailable just as compoundable and is an offense by any Magistrate.