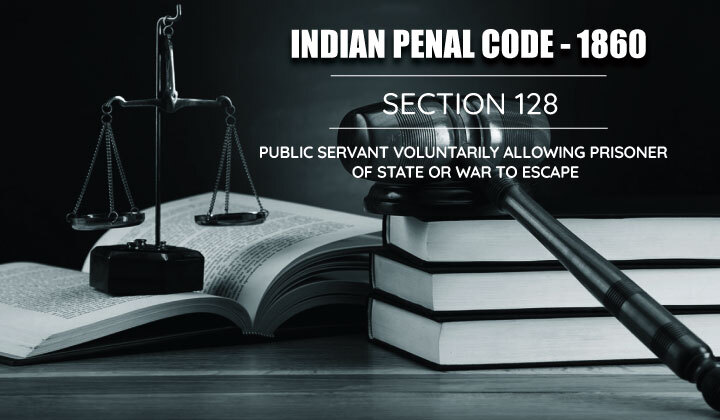 Section 128 of the Indian Penal code, 1860 deals with the  “Public servants voluntarily allowing prisoners of state or war to escape”. The term ‘State prisoner’ refers to a person whose imprisonment is essential to preserve India’s security from internal disturbances and foreign hostility.

According to the provision of this section, “whoever being a public servant, having the custody of any prisoner of state or prisoners of war voluntarily allows such a prisoner to escape from his place of confinement, shall be held liable and sentenced as per the provision of this section”. This section provides for punishment with imprisonment for life or simple or rigorous imprisonment for a term extending up to ten years, and shall also be liable to fine.

The ingredients of Section 128 are as follows: -

A Public servant is defined as a person who is elected or appointed to a public office, such as working for a local or state Government. It includes any servant of any local authority and any person involved in any employment or class of employment which the state government may from time to time; declare to be employment essential to the life of the community.

For Example – Police officers, health officers, code enforcement personnel, and other city personnel authorized to impose city ordinances, codes, and statutes. The term “Public Servant” is defined under section 21 of Chapter II of the IPC.

Offences under section 128 of IPC are regarded as Cognizable- Offences. In a cognizable offence, a Police officer has the authority to arrest the convict without a warrant and initiate an investigation with or without the permission of a court. The offence under section 128 is triable by the Court of Session.

Is IPC 459 bailable or non-bailable?

The offences under the Section 128 of IPC have been categorized as non-Bailable offences. It is also regarded as a non-compoundable offence under the provisions of CrPC.

What is the punishment for offences under IPC 128?

How to file or defend your case having constituents of offences under IPC 128?

In case of a cognizable offence, the Police officer is bound to register an FIR. Before filing an FIR, he can also conduct some kind of preliminary inquiry.

When someone is charged under section 128 IPC, then it is advised that he/she shall hire an expert lawyer who has experience in dealing with criminal cases. The offence under section 128 is non-bailable due to which it is very difficult for an accused to get bail. Therefore, an expert lawyer will be able to guide on the available defences, pleas, and bargains likely to be offered and the expected result of the trial, depending upon the facts and circumstances of the case. During the trial in a court of law, an experienced lawyer would strive to defend your case and undoubtedly help you, either by obtaining an acquittal or by reducing the punishment.

Important Judgement: Rajendra Singh and State of Bihar ... vs. Kapildeo Singh and Ors. 1978 (26) BLJR 12: This case is still prevailing and continues to give insights on the accusations made on the Public Servant. Under this case, it has been observed that when a complaint is made to a criminal court against any police officer and an allegation is made indicating that the police officer had acted or purported to act under Sections 127 and section 128 of the Code and in so doing committed some offence complained of, the Court will not hear the complaint unless it appears that the State Government had sanctioned the prosecution of that police officer.

If the allegations in the complaint do not reflect these facts, the Court can have no ground for looking at the sanction of the Government and in the absence of such a sanction for refusing to hear the complaint. It must proceed with the complaint in a similar manner as it would have done in connection with complaints against any other order.

Conclusion - In this blog, we discussed section 128 of IPC which deals with “Public servants voluntarily allowing prisoners of state or war to escape”. Offences against the State play a significant role in maintaining and regulating public order. The people of the State have the right to criticize the Government’s policies, however, they should not misuse their freedom to cause harm to the people around them or the Government. Waging war against India and against power is considered a punishable offence. The law also protects the high officials, such as the President, the Governor of every State, etc. in case of assault against them. Thus, it can be concluded that the State needs to restrict the freedom of the people of the country for the betterment of the State.

This article on IPC section 128 is written by Ms. Puja, BBA LL. B a final year student at UPES Dehradun
TALK TO AN EXPERT LAWYER