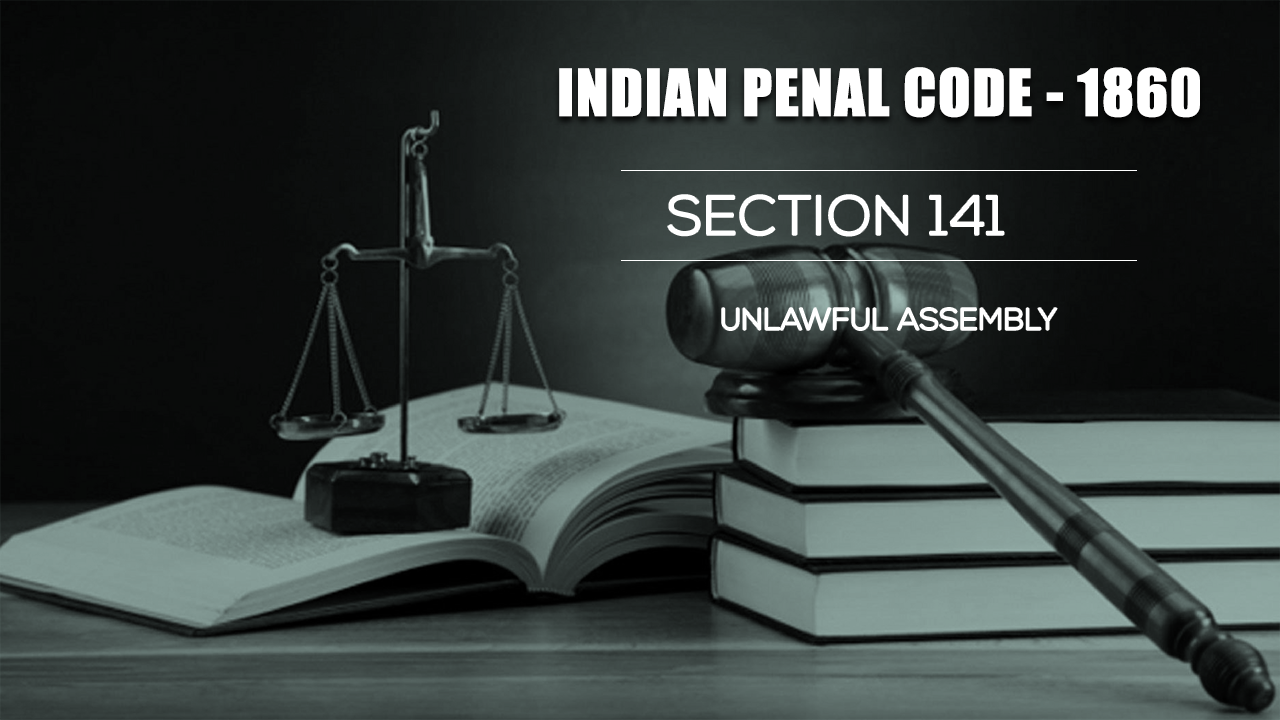 Section 141 is mentioned in the Chapter VIII of the Indian Penal Code,1860. This chapter mentions Section 141 to Section 160. The offences in this chapter may be classified into the following four groups :

2. Assaulting or obstructing a public servant in the suppression of a riot ( Section 152).

3. Wantonly giving provocation with intent to cause riot ( Section 153).

4. Liability of the owner or occupier of land on which an unlawful assembly is held or a riot is committed (Section 154).

5. Liability of the person for whose benefit a riot is committed (Section 155).

6. Liability of the agent of owner or occupier for whose benefit a riot is committed (Section 156).

Article 19 ((b) of the Indian Constitution confers the fundamental right to assemble peacefully and without arms. However, Section 141 of the IPC aims to criminalize unlawful assembly.

1. The Central Government, or

2. The State Government, or

4. Any public officer who is in the exercise of official power;

a) To take or obtain possession of any property from a person;

b)  To deprive any person of any incorporeal right, these rights are the ones which do not have any physical existence and cannot be touched, it can only be perceived such as Patent rights, or

c)   To enforce any right or supposed right;

a) To do what he is not legally bound to do, or

b) To overlook and stop someone from doing something which he is legally entitled to do.

Section 149 of IPC states some provisions related to common objective :

What is the punishment for IPC 141 Case?

The punishment for IPC Section 141 is described in Section 143 of the IPC. The punishment can be imprisonment which can be extended for up to 6 months or fine or even both.

Yes, IPC 141 are cognizable offences which means can be tried under the jurisdiction of the Court, under the first class magistrate.

How to file/defend your case for IPC 141 offence?

Lawtendo is a law-tech company that has around 15000+ lawyers across India on our platform who can help you file/defend your case for IPC Section 141. Lawtendo aims to facilitate legal services/advice provided to the clients are cost-efficient and quality service. You can contact us at +91-967133666 or [email protected].

Ramvir V. State of Uttar Pradesh ( 2018) – In this case, the Supreme Court had held that No Conviction under Section 148/149 of IPC  should be accused in absence of at least 5 members with the same intention. The main point behind the arrest has to be that there were at least 5 persons forming a group with a common objective.

Get in touch with the best criminal lawyer online

Mangal Singh V. State of Madhya Pradesh (1996) – In a free fight there cannot be said to be any form of an unlawful assembly and common intention. Each accused will be responsible for his individual act. If in an unlawful assembly 3 persons are acquitted and the rest could not be identified or are unmanned but the court is certain about the presence of other people in the group making the number to 5 or more than that, then, in that case, the section 141 will apply.