Liability of Person for Whose Benefit Riot is Committed - Section 155 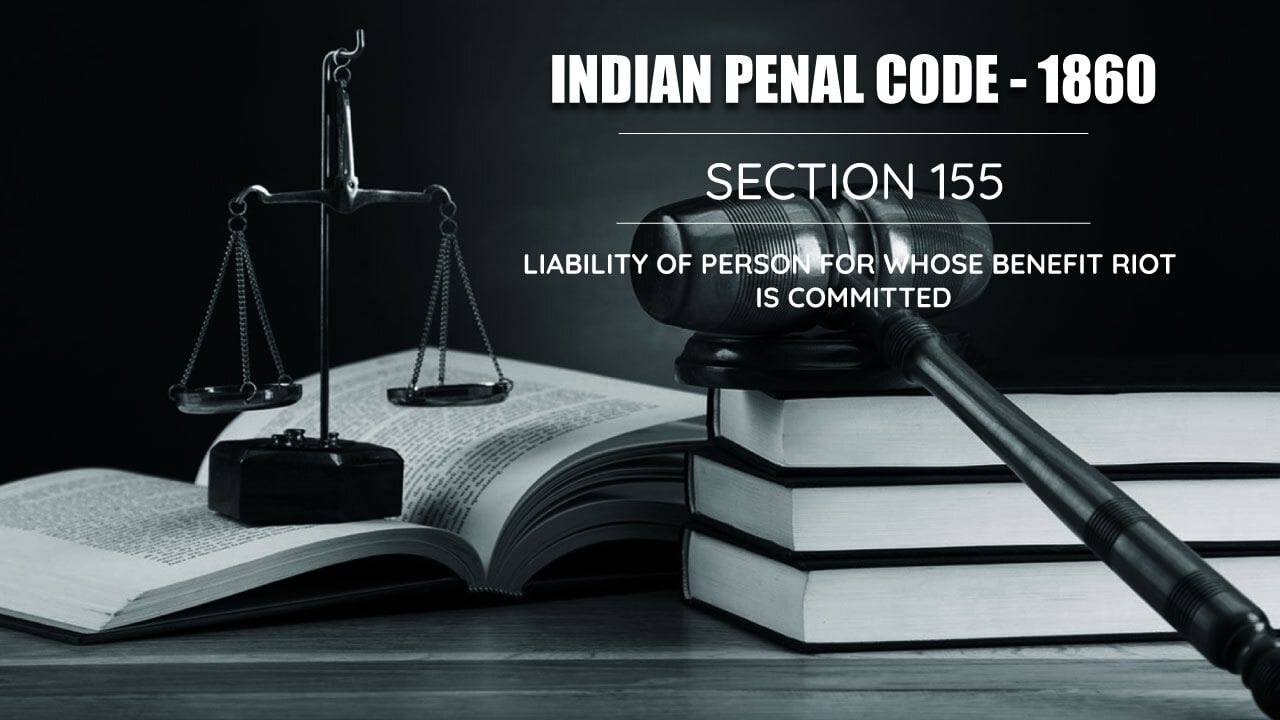 Rules and regulations or law is made for almost all possible offences or crimes which is possible and against the society. Under the Indian Penal Code, the crimes or offences which are against the society or state are given. To protect the public from various problems and nuisance there are laws to maintain public peace or for the safety and peace of the society, section 155 is one of the sections which deals with the same. In this, we are going to discuss what is IPC 155? What is the punishment for IPC 155 case? Is IPC 155 a cognizable offence or a non-cognizable offence? Is IPC 155 a bailable or non-bailable offence? How to file/defend your case for IPC 155 offence? And is there any famous judgment w.r.t. IPC 155?

Offences Against Public Tranquillity: The most important thing for the growth of an individual and country is if the society is progressive and peaceful. Morality and peace are the two important things of society. To maintain peace in society is very important and the state is responsible for that. It is the duty of the state to maintain the discipline and peace in the society and set examples that if someone breaks the laws or creates any nuisance which either causes society or the individual any type of problem will be punished.

Public Offences is given under chapter eight of the Indian Penal Code. The public offences are divided into:

Unlawful Assembly: It is defined as when five or more people assemble to commit an unlawful offence is called unlawful assembly.

The enmity between different classes of people: When the group of people belonging to the same class creates a nuisance to disturb the peace of the society or to any specific class of people.

Riots: When a group of people or an individual from the group commits offence is called riots. To consider any offence as riots certain ingredients needs to be fulfilled which are as follows:

Is IPC 155 a bailable offence or not?

Section 155 is a bailable offence.

Punishment for IPC 155 case: If the individual has taken advantage due to the riot or involved in the riots or even knew about it before it happened that person or his agent will be punished with a fine.

Section 155 IPC is a non-cognizable offence.

What to do if a person gets charged under section 155 of the Indian Penal Code?

There are certain steps that a person should take if that person is charged under section 155 of the Indian Penal Code which are as follows:

Since it is a non-cognizable bailable offence if the accused got arrested there is a chance that the accused might get released on bail and then the accused has to be present in front of the magistrate for trial. After the trial, if the magistrate thinks on the basis of facts and the evidence that you are not guilty then you will be dismissed from the charge if not then the court might punish the accused with a fine.

Lawtendo will connect you with domain-specific expert lawyers handpicked with respect to your unique case from its array of 15000 lawyers. And will provide managerial assistance at every stage of the case as well. Further, the lawyer will draft a petition for bail or for defending the accused in the trial or on behalf of the victim can file a complaint under section 155 or provide assistance for filing FIR online.