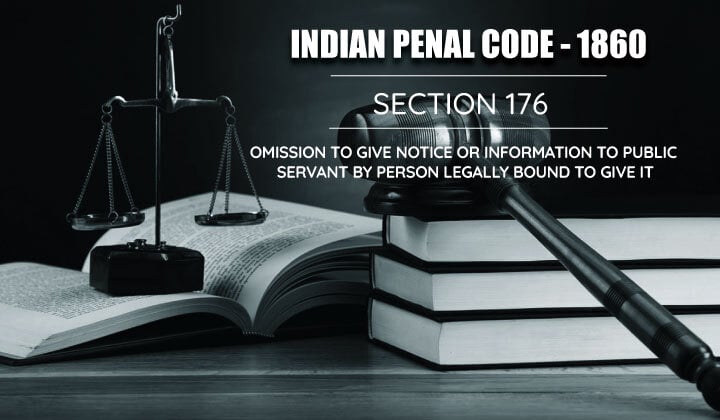 Anyone who is legally bound to give notice or to provide any sort of information over any subject to a public servant, as such, where the person intentionally omits to provide the information or give notice in the time and manner which is required by law, shall be punished with imprisonment for a term extending to one month, or punished with the need to pay fine or both.

If the information required is to be given with respect to the commission of an offence or is required for the very purpose of preventing an offence from being committed, or in order to apprehend an offender, with mere simple imprisonment for a term which may be extended to six months, or with fine which may extend to one thousand rupees, or with both

In Offences that are Bailable, there is a grant of bail and it is considered a matter of right, where the arrested person is released after the bail is granted. It may be either given to a police officer who is having custody of the accused by the court. So all the conditional punishments for someone guilty of Section 176 of the Indian Penal Code, it is considered a bailable offence. Offences that give bail comparatively less serious when compared to the non-bailable offences. They can be tried by any magistrate.

What is the punishment for IPC 176 Case?

Under Section 176 of the Indian Penal Code, the punishment given to someone guilty of Section 176 firstly if they omit to give the notice or to provide that information that is to be provided by law, will be punished with imprisonment for a term that can be extended to one month, or with fine of about five hundred rupees or both of them.

How to defend or file your case for IPC 176 offence?

A capable lawyer will assist and defend their client’s case in either lessening the sentence of their punishment or by getting them out of it.

Relevant Case Laws: M . Mallika v. Inspector Of Police: The petitioner in this case named Mallika is the daughter of Karuppayiammal, and she has two other daughters apart from Mallika, who is named, Mani and Jayakodi. It is said that Karuppayiammal was living in Thiruvalluvar Colony away from her daughters. And she passed away on 07.11.2014 and she was cremated on the very same day of her death. It is alleged by Mallika that her sister Mani did not inform her about their mother's death, also accusing having suspecting the role of her sister Mani and her family members alleging that there is a probability they might have poisoned her mother. The Offence was taken under Section 176 of the Indian Penal Code. But since there was o foul play suspected in the death of her mother, merely that she died of Old Age and the major that if Mallika was really worried about her mother she should have taken care of her, and considering all this the court did not hold the other members guilty under Section 176 and since it lacks merits the petition stands dismissed.

State of M.P v. Prem Kumar Jagannath Prasad Jaiswal: The respondent was prosecuted for an Offence under Section 176 of the Indian Penal Code, for not providing the information to the incident of attempted murder against Ms. Sangita who received burns, scars under the Provisions of Dowry Prohibition Act. Thus, apart from the facts associated with the case, there wasn’t any material on the basis of which it can be comprehended that the respondent was legally bound to give any such information. Since there was no demonstration to the fact that law ordains a person to give information about the events that had duly been given to a public servant, hence there was not much evidence to constitute the respondent guilty over the offence, hence the respondent was not held guilty under Section 176 of the Indian Penal Code.