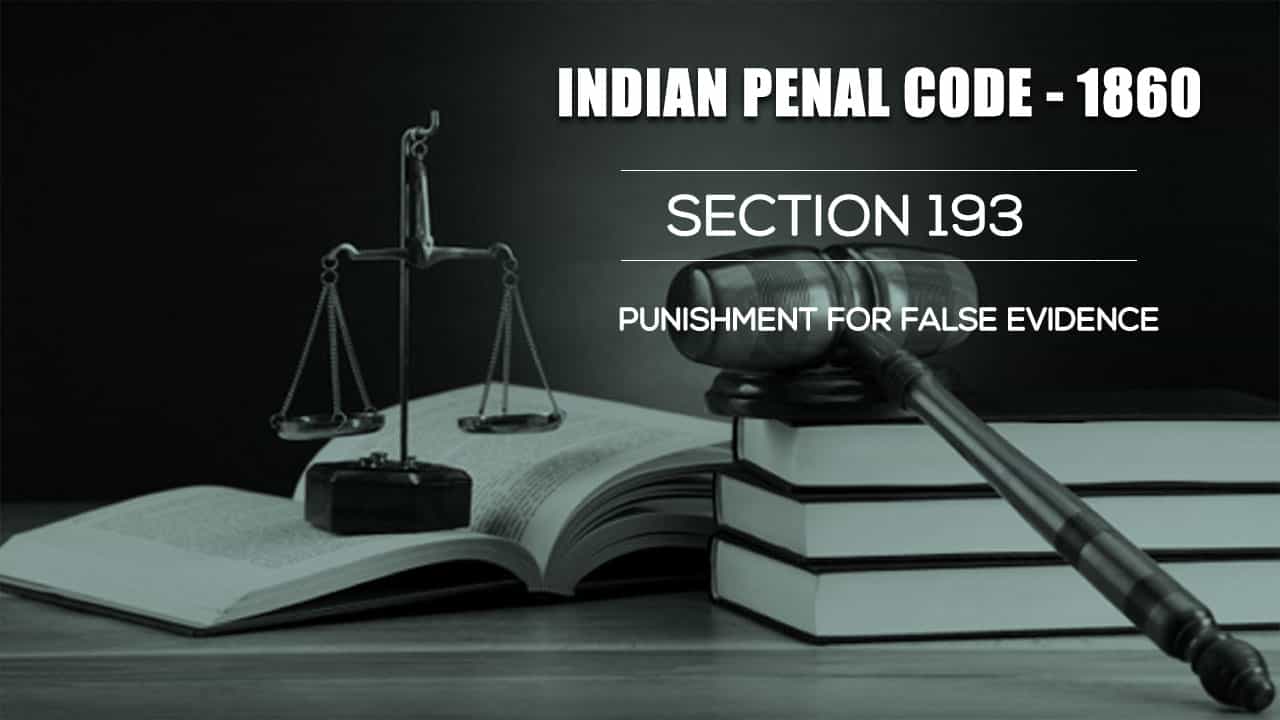 Furthermore, the giving of false evidence or false statement under oath by the witness is an obstruction of the administration of justice and is a violation of an order of the court. It is important to establish the concept of administration of justice against the practice of giving false evidence by parties to support their claims in the judicial system. Therefore, the penal code has specific provisions to punish and promote justice to victims against any offence committed under sections 191 and 192 of this code. Let us understand the meaning of false evidence and the punishment for offence with respect to section 193 of the code through this article.

Section 193 talks about the punishment for the crime committed by the accused under chapter XI such as:

Essential ingredient: When the person has committed an offence of false evidence it required the following point to hold him punishable under section 193 such as:

On the fulfillment of the above essential, the person shall be liable to be punished in said section of the IPC.

In the first part, when a person giving or fabricating false evidence in a judicial proceeding shall be punished with imprisonment for 7 years and a fine.

Furthermore, when a person internally gives or fabricates the false evidence in any other case shall be punished with imprisonment for 3 year and fine. However, all the other classification of offence is similar with above part i.e., it is a bailable offence, non-cognizable offence and non-compoundable offence, but the only difference is that the accused shall be triable by any magistrate in India

The victim under the offence of giving or fabricating false evidence internally in a trial or in any other case, has two ways to file a case in court- the first way is through an application in the court, and the second way is a suo motu by the court itself. The application can be filed by any person who is not the party to the proceeding in relation to which the offence is committed. After going through the application if the court is satisfied with substantial evidence present by the party, therefore the judge shall initiate the investigation and based on the charge sheet file by the policeman and the evidence available for proving it. The court will decide the case and send it to the first class magistrate having the jurisdiction.

How to defend your case for IPC 193 offence

In the case charged under the offence of giving false or fabricating evidence by the accused are usually too difficult tasks for the prosecutor’s lawyer to prove the guilt of the accused before the court. This crime is all about the Latin maxim ‘mens rea’ i.e., criminal intent to commit the offence. Therefore, the prosecutor has to be proved before the court about the criminal intention of the accused beyond a reasonable doubt that the accused has intentionally used or gave false evidence or made a false declaration or statement under oath.

In the above situation, the lawyer from the accused side often takes the defence that the defendant has no mens rea toward the commission of the offence, as the accused has no intention to give false or fabricated evidence, or defendant lawyer can also use the defence that the accused at the time of giving the evidence or the statement does not know that they are false or corrupt. As making a mistake while giving the statement or evidence is not an intentional misstatement, thus a lawyer can use it to protect its client from the prosecution of criminal charges. This defense argument is successful in court and can help the accused as the other party lawyer had to prove beyond a reasonable doubt that the false statement wasn’t just a mistake.

All these defenses will depend upon the facts and circumstance of the cases. As the attorney of the accused has to choose which defence argument will work in the court on cridence to the offence committed by the accused.