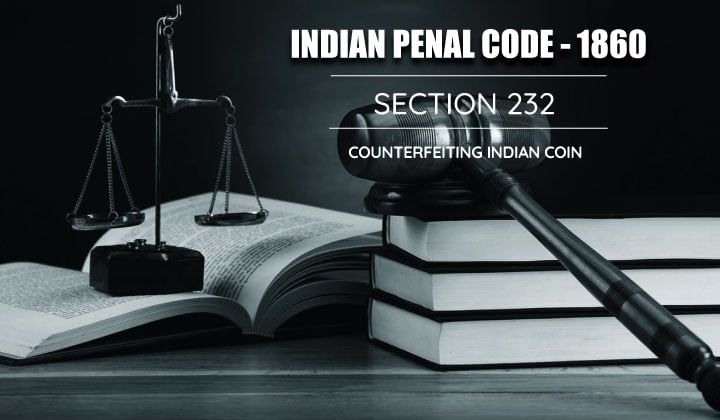 Chapter XII of Indian Penal Code, 1860 deals with Offences relating to Coin and Government Stamps. As per Section 230, Coin is a metal used as money which is stamped and issued by the authority of some State or Sovereign Power so that it can be used. Indian Coin is a metal coin stamped and issued by the authority i.e Government of India and should be used as a money. As per this Chapter, Indian Coin should be issued and used and notwithstanding that it may be ceased to be used as money. It contains from Section 230 to Section 263A. This blog deals with Section 232 of IPC.

Section 232 explains that whoever counterfeits or knowingly performs any part of the process of counterfeiting coin, shall be liable for punishment. To understand this Section we need to understand the meaning of counterfeit money. Counterfeit money means currency which is produced without the legal sanction of the State or Government. This is done deliberately to imitate the currency such that it can deceive the recipient of that currency.

The following cannot be termed as coin:

The following can be termed as coin:

Essentials of Section 232 of IPC

The punishment of such offence is Imprisonment of life or for a term which may extend to ten years and shall also be liable to pay fine.

Section 232 IPC can be tried in the Court of Session. The Ministry concerned with this offence would be the Ministry of Home Affairs and the department in this offence is the Department of Internal Security.

The facts of the case was that Thane Crime Branch was informed about an illegal manufacturing of Indian Coins was being carried out in Kaniz Apartment in Mumbra on 1.05.2001. On that premises raid took place and the appellant and original accused no. 2 were caught on that day. As per the prosecution, the process of manufacturing of counterfeit coins of denomination of Rs. 5 was found. The following materials seized from the flat were the equipment and machinery used for counterfeiting coins, the coins, the raw material which was in molten state in a vessel on the stove. A punchnama was made on both the accused and were taken to the police station and a complaint was lodged. Further investigation took place. Accused no. 1 had challenged the judgement of Adhoc Additional District Judge, Thane as he was convicted under Section232 of IPC and sentenced to rigorous imprisonment for life and under Section 235 of IPC and sentenced to imprisonment for 10 years and a fine of Rs. 50000.

The prosecution could not establish charge under Section 232 and 235 of IPC which was that the coins seized resembled the original and that the resemblance would deceive a person. These basic ingredients for proving the offence punishable are absent in the present case. Therefore the court held that due to lack of evidence to prove the prosecution’s case, entitled the accused to acquittal. Due to this the conviction and sentence under Section 232 and 235 of the Indian Penal Code is set aside. The appellant who was in jail was also released.

Kailash Chand  counterfeited Indian Coins of the denomination Rs. 5 and Rs. 2 or knowingly performed any part of the process of counterfeiting coins. Metallic pieces and hydraulic pressure machines were also recovered from the accused.

The prosecution was not able to prove that the accused had counterfeited Indian Coins and was possessing any instrument or material for counterfeiting. This shows that it cannot be said that counterfeit coins could be minted by using the round metallic pieces on the said hydraulic pressure machine. The prosecution failed to prove the offence under Section 232 and 235 of IPC against the accused and was acquitted for the same.

How can you file/defend your case for Section 232 of IPC?

Through Lawtendo you can connect to an appropriate lawyer who will help in filing or defending your case for the offence under Section 232 of IPC. We, at Lawtendo, provide around 15000+ Lawyers all over the Country on our Online Platform. We provide Cost Effective and Quality Legal Services.