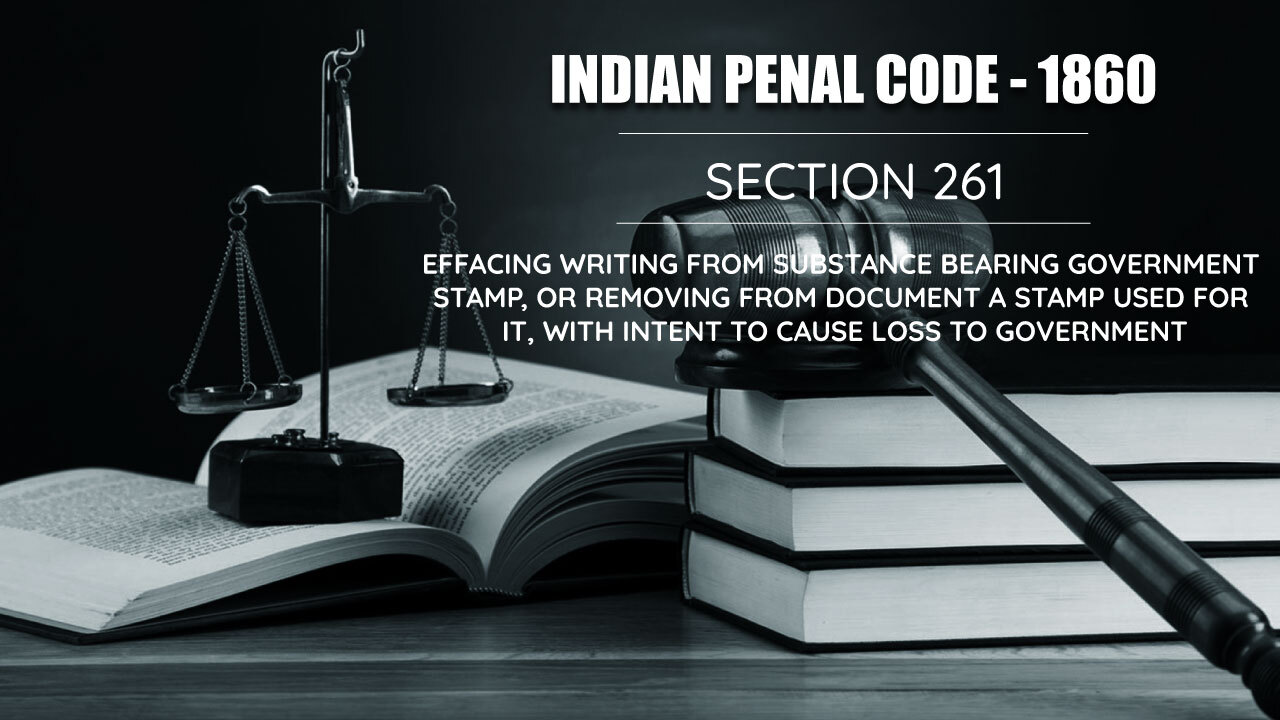 Stamps are basically a kind of verifying identities, acknowledgment, proofs of the sanctity and authenticity of written instruments.

Generally, a seal and notary ticket is used to authenticate and validate the sanctity of essential documents.

In India, stamps are used in several judicial, non-judicial, and postage works, which directly and indirectly contribute to the revenues. So, there are also provisions in law to prevent any evasion of such revenues through any means.

So, Section 261 is one of the provisions which deals with the provisions to curb and discourage the effacing of stamps or seal and passing off of revenues.

As stated above, Section 261 deals with the provisions for preventing evasion of revenues or causing a loss of any kind to the government.

Under the provisions of Section 261, it has been made punishable to use any writings from any substance bearing a government stamp by distorting it or removing a stamp from any document used for it, with an intent to cause loss to the government.

The ingredients of Section 261 is mentioned as below:

Offences under the Section 261 of the Indian Penal Code, 1860 are Cognizable in nature, and police officers can make arrests without the warrant of court.

Is IPC 261 a bailable or non-bailable offence?

Section 261 of the Indian Penal Code, 1860 is though bailable, but non-compoundable. It means a person accused of this section shall have the right to get bail by the court and denial of this right shall be substantiated with evidence and an appropriate reason.

The offences under the aforementioned section are triable by the Magistrate of First Class.

What is the punishment for IPC 261 Case?

As per the provisions of Section 261 of Indian Penal Code, 1860, if any person is found guilty of the offenses mentioned in IPC 261, shall be punished with imprisonment, which may extend up to periods of three years, or would be fined or with both, depending upon the case.

How to defend your case under Section 261 of the IPC?

Generally, these kinds of offences are committed by government employees. So, the case can be filed by the department itself.

Also, it can be filed by any person in the nearest police station, provided that before inquiry the prior sanction from the relevant department of the accused must be obtained.

Also, at the trial in a court of law, an expert lawyer would strive to defend your case and would for sure benefit you, either by getting an acquittal order in your favor or by reducing your punishment.

You can get in touch with our Lawtendo team for any legal assistance, as we have proved our efficacy and effectiveness at almost all endeavors we have joined.

Judicial Pronouncements w.r.t. IPC 261 if any?

Sukhbir Singh v/s State (2016): Sukhbir, an employee of the Government was allegedly caught red-handed attempting to sell used 100 postal stamps of ₹ 15/- each. At the same moment, the accused Sukhbir Singh was arrested by the same police and from that place, a bag was also seized from the accused, in which it was alleged that there were additional 538 small envelopes and 220 postal stamps of ₹ 15/ having different postal tickets affixed on them recovered.

The Trial Court after following the due course of law convicted the appellant and was given a sentence for imprisonment and fine under the section 409 and 261 of Indian Penal Code, 1860.

Later, the appellant filed an appeal before Patiala House Court Delhi with the prayer to set aside the impugned judgment and order on sentence.

The court observed that- as the appellant was working in the Postal Department of Government, but no prior sanction had been taken from the concerned department. Also, there are no independent witnesses or any witnesses of the department and the witnesses from police have been declared hostile by the learned Trial Court.

Accordingly, the accused was acquitted from the court citing the benefit of the doubt for the offences under section 261 and 409 IPC.

Sitaram v/s State of Rajasthan (1975): On the allegation against Sitaram of bribery, fraud and intentionally causing loss to the government, preliminarily it was observed by the court that -

Accordingly, he was convicted for the same by the trial court and High Court as well.

At a later point in time, the case was brought before the Supreme Court for consideration, as a special leave petition.

S.C. observed that - the story of the demand for bribes by the appellant is not proved beyond a reasonable doubt.

So, on that note, the appeal was allowed.