Rash Driving or Riding on a Public Way - Section 279 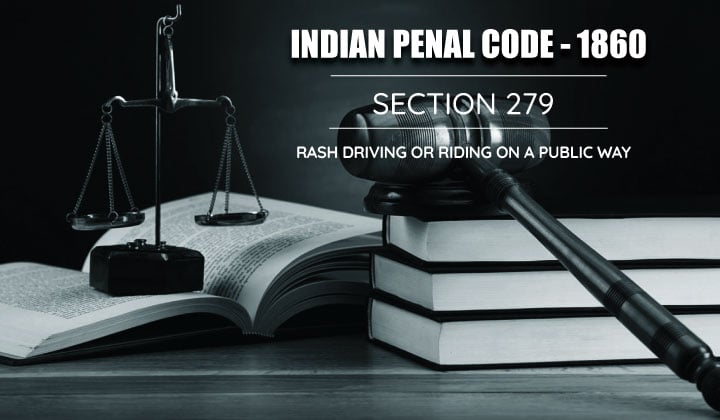 What is the meaning of the word Hurt and Injury?

The word ‘hurt’ is defined in section 319 IPC as under 319. Hurt—‘When a person causes bodily pain or disease or infirmity to another person he is claimed to have caused hurt’. The word ‘Injury’ is defined in section 44 of IPC.—The word “injury” means any kind of harm whether legally or illegally caused to a person’s mind, body or reputation, or property.

What happens if the victim dies due to rash and negligent driving?

377. When someone causes hurt to a person by doing any act rashly or negligently in a manner so that it can endanger human life or the safety of other people, shall be punished with imprisonment for a term up to 6 months or with a fine of up to 5 hundred rupees or with both.

378- Causing grievous hurt by act endangering life or personal safety of others. When a person causes grievous hurt to a person by doing any kind of activity so rashly or negligently then it can endanger human life, or the personal safety of any other person shall be punished with imprisonment for a term which can reach up to 2 years or with a fine which can extend to 1000 rupees or both.

Section 304A criminalizes a person who causes the death of a person by doing a rash or negligent act and such a person shall be liable to be punished with imprisonment for a term up to 2 years or with a fine or with both.

Yes IPC 279 is a bailable offence. In a bailable offense, the grant of bail is a matter of right. The right may be either given by a police officer who is in the custody of Accused or by the court holding discretion. The accused may be released on the execution of a “bail bond”, with or without sureties. In a non-bailable offense, there is no matter of right in the grant of bail but still, the accused can apply for bail with suitable causes it is upon the court to grant it or not.

What is the punishment for IPC 279 Case

A person convicted under section 279 shall be punished with imprisonment of either description for a term up to six months, or with a fine up to thousand rupees, or with both.

How to file/defend your case for IPC 279 offence?

There are 2 options available to file a case u/s 279. - You can give an application orally or in writing to an officer in charge of the police station u/s 279 to register an FIR. You can visit the nearest police station in your vicinity irrespective of the jurisdiction and get a zero FIR registered. - if a person has been refused the right to get an FIR registered by the police officer in Charge he/she can send the information, in writing or by post to the Superintendent of Police concerned and he will then go through the information and if he will be satisfied that the given information is a cognizable offence then he will investigate the case or assign an officer lower than his cadre. Whoever investigates the case will have all the powers of an investigating officer. - A complaint can be submitted to the magistrate orally in the court or in a written format under section 200 of the CrPC. Once you submit the complaint, the magistrate will conduct a hearing, deciding upon the issue of cognizance. In this channel, the informant and the witnesses shall be examined on oath in front of the magistrate

Landmark judgments: In Empress of India v. Idu Beg13, Straight J., stated what is the correct meaning of criminal rashness and negligence: ‘’criminal rashness is hazarding a dangerous or wanton act with the knowledge that it’s so, which is going to cause injury but without intention to cause injury or knowledge that it; ll probably be caused. The criminality lies in running the risk of doing such an act with recklessness or indifference as to the consequences. Criminal negligence is the gross and culpable neglect or failure to exercise that reasonable and proper care and precaution to guard against injury either to the public generally or to an individual in particular, which, having regard to all the circumstances out of which the charge has arisen.’’ The Punjab and Haryana high court held in 2018 that “It may not be always possible to determine with reference to what is the speed of the vehicle in deciding whether a person was driving rashly or negligently. Both these acts denote abnormal and unacceptable conduct. Even when one is driving at a slow speed, but recklessly and negligently it will amount to rash and negligent driving within the meaning of section 279 IPC.’’ Suleman 1967 If an individual who doesn’t know driving and maybe consequently unable to regulate a car or a vehicle, chooses to drive a car or a vehicle on a public road without complying with Rule 16 of Bombay automobiles Rules, he obviously does an act, which may be said to be rash and negligent, as contemplated by Sec. 304A IPC. It is negligent because he is not taking enough care of keeping a trainer along with him. It is rash because it utterly disregards the general public safety. . 'Madh.-B. LR 1952 Crl 302 (A)'- it is stated that ‘If any injury is not caused but the act was rash or negligent, the proper Section under which an indictment would lie is Section 279, I.P.C. But if a result of a rash or negligent act injury has been actually caused, the appropriate Section under which a person should be tried is Section 337, I.P.C.’