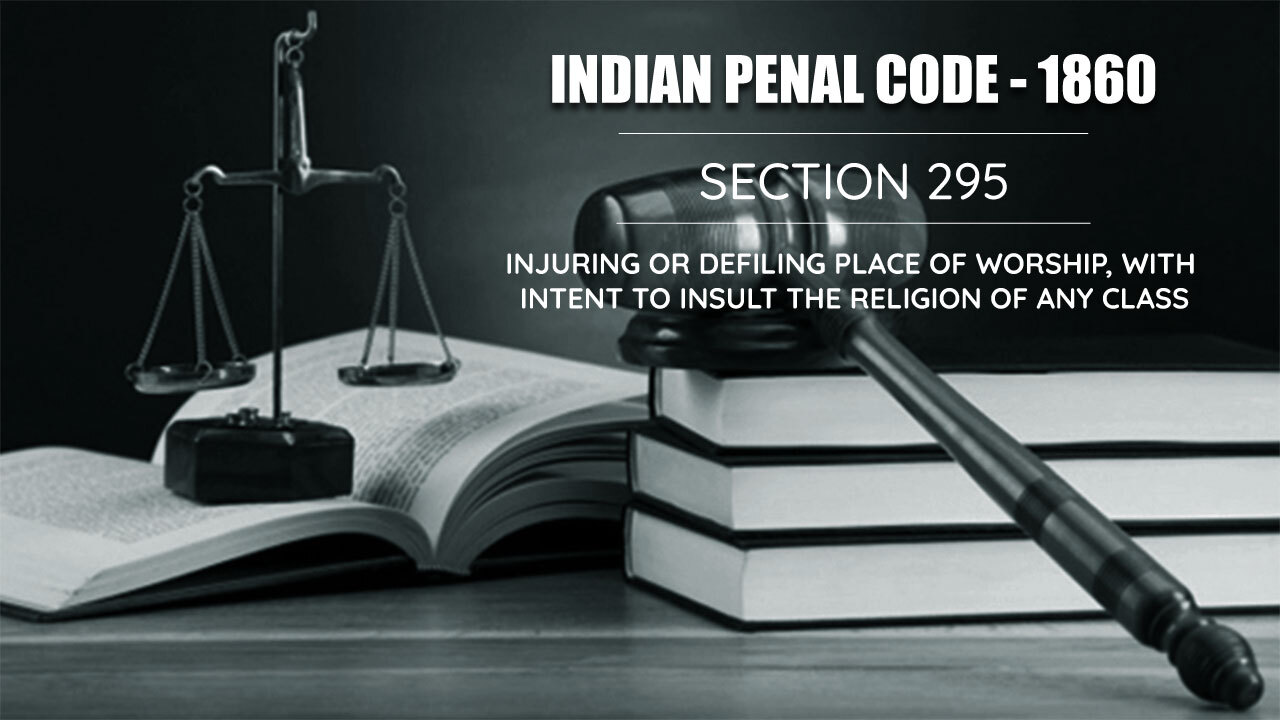 India has been a melting pot of different religions, ideologies, and beliefs with people holding such beliefs with a lot of dignity and pride. This introduces the liability upon the state to ensure that peace and harmony are maintained from the nuisance elements of the society, some who want to disrupt the tranquility amongst the people, by hurting their religious sensitivity.

To prevent the same Indian Penal Code (IPC) has dedicated CHP 15 for offences relating to religion such as trespassing religious burial grounds, damage or defiling of religious places and objects, etc. Under the ambit of chapter 15 falls our concerning section 295. The progressive article is an attempt to elaborate and understand what is section 295 IPC.

Section 295 IPC: Under chp 15 of IPC, section 295 states the punishment for vandalizing or defiling religious places with the intent to outrage religious sentiments of the people belonging to any class. The section reads as, anybody who with the aim to insult the religion or with the knowledge that his actions will insult any class's religious feelings, destroys, defiles or damages objects of worship or the religious place which is believed to be sacred by any class of people.

Thus this section makes such damage to religious places an offence and its subsequent punishment.

Punishment under Section 295 IPC: For violation of IPC Section 295, the offender attracts imprisonment for a maximum period of 2 years or fine or both.

According to IPC first schedule, the nature of section 295 IPC is as follows -

The offence under Section 295 is triable by any Magistrate.

Some famous judgments: The interpretation of section 295 is summed up into the following case.

Facts - The petitioner alleged that the accused had broken the idol of Lord Ganesh with the motive to insult religious sentiments of his community as well his. However, the trial magistrate, sessions court, and as well as the high court held that the breaking of this mud idol of Lord Ganesh was not an offence under IPC Section 295. This was further appealed in the apex court.

The decision of apex court -

Facts - The petitioner alleged that the idols of Lord Ganesh were immersed in artificial tanks on account of saving the environment from the various pollutants use for making the idol however after the immersion of idols they were taken and dumped in garbage therefore intentionally hurting the sensitivity of his petitioner.

Decision - The court found that none of the ingredients of section 295 IPC were not fulfilled prima facie. As the following ingredient was not proved, the accused has maliciously defiled the idol of Lord Ganesh, to outrage the sentiments of the concerned community.

As the petitioner failed to showcase the malicious intent of the government to hurt the feelings of the community as disposal of Lord Ganesh idols were done in furtherance of protecting the water bodies from being polluted from the various pollutants used for making the idol.

The FIR was quashed by the apex court and it further declared certain guidelines for the protection of the environment during the lord Ganesh festival in Maharashtra.

Facts - the accused were alleged to have attempted to destroy the Mazar of the peer which was considered sacred by the community of Auchandi and subsequently insulting their religious beliefs. An FIR was filed regarding the same.

Decision - the court was of the view that the prosecution could not through the witnesses establish that any of the accused destroyed the Mazar or even attempted to, further there was no substantial evidence that would indicate that section 295 IPC was attracted in any way.

One of the ingredients that the destruction or damage had to be done of the accused was not proven thus failing to invoke IPC section 295.

How can you file your case for the IPC Section 327 offence?

Steps for filing E - FIR is as follows -

b. Mother or father name of complainant

h. Any other relevant description of the case.

Note - before submission all the details should be rechecked and ensure that the email id is correct as the FIR for future reference will be sent to this mail ID.

After completion of the charge sheet the matter is pursued as a trial in the court with the prosecution establishing the ingredients of section 295 and if successfully done then the accused may be imposed with imprisonment up to 2 years or fine or both depending upon the discretion of the court.

How can you defend your case for the IPC Section 327 offence?

Further, the lawyer will draft a petition for bail or for defending the accused in the trial or on behalf of the victim can file a petition for proving the ingredients of section 295 before the judge or provide assistance for filing FIR online.