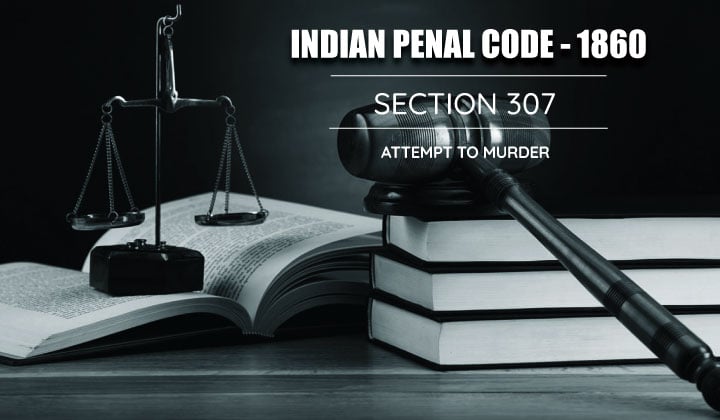 IPC sections 307 and 308 of the code deal with the offenses of an attempt to murder and attempt to commit culpable homicide amounting to murder. Both these sections have expressed in similar language and so should be interpreted in the same way.

Section 307, IPC attempts to commit murder punishable up to 10 years of imprisonment, and if hurt caused up to life imprisonment with fine.

Ingredients: To attract the provisions of IPC 307, all the ingredients of murder short of death must exist, viz-

1. The accused knew to be likely to caused death, and

2. That it was sufficient in the ordinary course of nature to cause death

2. Such bodily injury as is likely to cause death

The element of Liability: To constitute an attempt at common law there must be evidence of some overt act as sell as evidence of men’s rea. The burden is therefore on the prosecution to show:

A person commits an offense under sec 307 IPC where

For a conviction under this section, the accused don’t need to be charged at every stage in the offense, except the final stage. It is enough if in the attempt he did an act towards the commission of the offense. The crucial stage test is where the law act, if the natural consequence of his act should result in death but he was frustrated by extraneous circumstance, he would be guilty of an attempt to commit the offense of murder. The act to fall within section 307, IPC must be such that but for the intervention of some circumstances beyond the control of the accused it would, if completed here resulted in death.

Punishment for Attempt to Murder Under Section 307 IPC

Offense and its Punishment

Attempt to Murder by life-convict, if hurt is caused  -  Death or 10 Years + Fine.

How To Defend A Case Under Section 307

A person who is charged with an attempt to murder can face severe punishments and penalties if convicted.it is equally difficult for the petitioner to prove the charges levied by him or her. Therefore this is the reason both the petitioner and the defendant should be thrown in pretending the case .In order to defend the case the arrested person must know both before and after the arrest. For this purpose, the arrested person might take the help of a legal practitioner. One should also prepare a proper chart of events that happened as well as of the case and note it on a piece of paper so that it becomes easier for him and the lawyer to go strategically and successfully conduct the trial and convince the court to give the judgment on the persons favor. one must also sit with a lawyer and understand the procedure relevant laws governing the case as well as the risks situated in the case.

Article 22(1) of the Indian constitution and section 50(1) of CrP.C 1973,  states that a person has the right to be informed of d the grounds of his arrest.

Section 50Aof CrP.C states that the arrested person has the right to get his relatives and friends informed, the police officer after he arrests a person has to inform the family friend or relatives of the accused about everything that about the reasons as well the place where the accused will be kept.It is the sole duty of the police officer to inform the arrested person about his rights.

Section 50(2) of the CrP.C states the right to be informed about the right of ail. The right to be produced before delay. Section 56 of Cr.P.C. and Article 22(2) of the Constitution of India It is illegal to keep a person in detention for more than 24 hours without the orders of the Magistrate

Under Article 22(1) of the Constitution of India, along with Section 41D of CrPC, and Section 303 of CrPC, the Right to consult a legal practitioner and a free legal aid

Section 76 of Cr.PC states the right of not being detained for more than twenty-four hours. It is not legal to manhandle a person at the time of arrest. A right to be examined by a medical advisor. Being honest and open to your attorney’s questions is the best route of mounting a sound legal defense

Rambabu Vs. The State of Madhya Pradesh 2019

In Sarju Prasad v state of Bihar, AIR 1965 SC 843: 1965 BLJR 316: J 766, the supreme court held that the mere fact that the injury inflicted did not wholly cut any vital organ of the injured is not by itself sufficient to take the act out of the purifies of section 307, IPC but the prosecution must establish that his intention was one of the three kinds mentioned in clauses 1 to 3 of section 300, IPC. The state of mind of the accused has to be deducted from the surrounding circumstances and the motive would be the relevant circumstances. The brief fact of the present case were that on 23 February 1961, Madan Mohan Saha and Shankar Prasad Shrivastava were attacked while they were passing through the Dhaime chowk at about 1:30 pm by Sunil prasad sustained grievous hurts and that these injuries were inflicted upon them by Sushil Chand Jain with such intention or knowledge and under such circumstances that if they had resulted in death the offense would have been that of murder and Thus, the offense would fall under section 307, IPC.