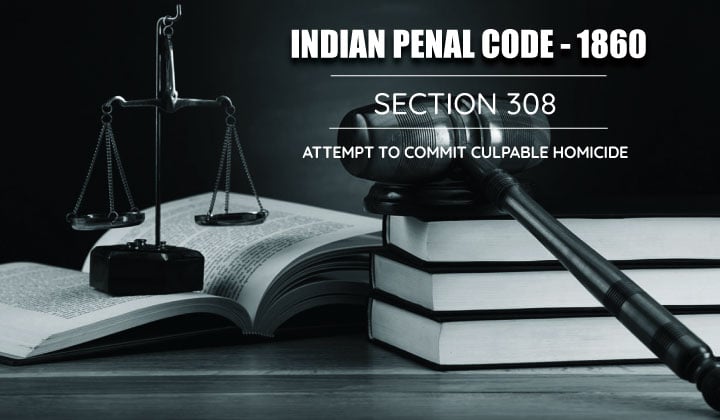 Section 299 of Indian penal code 1860 explains culpable homicide, it signifies that whoever causes the death of a person by executing an action to cause bodily injury similar to death or cause direct death or with the sound knowledge that his execution of such actions would cause death commits the offense of culpable homicide under section 308 of IPC 1860.

A person said to commit an offense under this section, if he does an act with such intention or knowledge and under such circumstances that, if he thereby causes death, he would be guilty of culpable homicide not amounting to murder as defined under Exceptions 1 to 5 to section 300, IPC. To invoke this section, intention to commit culpable homicide not amounting to murder must be established.

An attempt to commit a crime is executed to commit that crime and forming part of a series of actions performed which would constitute its actual commission if it were not interrupted. It must then be not murder but an attempt to commit culpable homicide. This can only be proved by proving facts and circumstances, from which it would be justifiable to hold that, if the act had been executed then, it would not be amounting to murder but culpable homicide,

Because of the gravity of the offense, the Code has made an express prevision to punish an attempt to commit culpable homicide under Section 308, IPC instead of leaving, it to be dealt with under section 511, IPC, which applies to all attempts to commit offenses punishable with imprisonment. Where the use of a revolver from the accursed party did not result in the death of anyone on the complainant's side, it was held that the accused was liable for the attempt to commit culpable homicide. But if the shot had killed one, in consequence, the offense would have been culpable homicide( Ali Zaman v. State AIR 1963 SC 152), punishable under section 304, IPC.

1. A person accused of section 308 IPC shall be sentenced to imprisonment which may extend up to 3 years or fine or both

2. A individual injured in the attempting to culpable homicide the offender will suffer imprisonment for a term of extending to 7 years or fine or with both

3. Attempt to commit murder and culpable homicide are both non-bailable and cognizable offense

4. Offence under Section 308, Non-compoundable and Trialed in Session Courts.

What to do if convicted in an attempt to commit culpable homicide case?

A crime as consequential as an attempt culpable homicide is a critical case both for the accused or the victim to deal with a convicted person can face serial penalties if he is charged with an attempt to culpable homicide. At the same time, it is hard for the procurator to prove the livid charges, it is equally important for the victim and the accused to get through with the preparation of the case. A person must know all of his rights before and after getting arrested in a case of culpable homicide. To give a correct way to the case a person might take the help of a legal practitioner. The person should jot down all the events and prepare a timeline so that it is easier to brief the lawyer about the case. This process will help the lawyer in a strategy formation and conduct the trial successfully also convincing the court to give the judgments in the party’s favor.

A person should be acquainted with a fair understanding of the law involved in the cases of culpable homicide. One must conduct meetings with the lawyer and get well known with the procedure as well as the laws governing the particular case. It is also necessary to perform your own research and understand the risk factors involved and also the ways out to overcome them.

How to deal if involved in a false case of attempt to commit culpable homicide?

Under section 308 here can be a lot of incidents where a person has been falsely accused often attempt to culpable homicide, in those cases the accused must take the advice of his legal practitioner and should detail him about every minor scenario of alteration in any of the situations can cause a big impact on the case, so the person must accurate every detail. A person must have enough knowledge and research the case at the same time preparing himself accordingly for the trials with the help of the lawyer.

The Need for a Legal Practitioner

If an Individual is filing or defending under sec 308 of IPC it is obvious that he needs the guidance or help of a criminal lawyer. A good and experienced criminal lawyer ensures going in the right direction and he helps prepare a solid defense of the case by his substantial experience. A criminal lawyer also prepares his Clint how to deal with cross-questions and answer the prosecution correctly, he knows how to tackle a particular case by his years of experience and can make the case win in the individual’s favor even in the least possibilities.

How to get bail under section 308 IPC?

An offense under section 308 IPC is characterized as non-bailable because of its severity so getting bail in cases as an attempt to culpable homicide is not easy. To get bail in such cases an offender would require very strong defenses with reasons; He can apply for anticipatory bail before the arrest is made when he has the reason to believe that they might be arrested. The court considers various essentials of the offender such as antecedents, his status or position in the society, his motive behind committing the offense, charge sheets given by the police, etc. After inspecting all the ingredients if the judge decides to favor the accused then bail can be granted. In this situation, it is mandatory to take advice assistance from an experienced criminal practitioner.

What happens in case a criminal charge doesn’t get dismissed?

A person charged with a crime, be it minor or major, is indeed a serious matter, if he is facing criminal charges as here under section 308, there are several risk factors, penalties, and consequences such as having a criminal record, jail time, hamper of relationships, future career prospects, and other social problems. It is advised to consult a qualified, experienced criminal practitioner who can guide in the right direction, protect the rights, and secure the best outcome of the case by preparing solid defenses and can help in getting the judgments in favor of the person and getting the charges dismissed.

After analyzing section 308 of the Indian Penal Code 1890, a conclusion can draw well that not only committing a particular offense is a punishable crime but also an attempt to commit such offense is punishable. An attempt to commit culpable homicide is punishable in the presence of factors like intention, knowledge, and preparation of a crime and the court considers these factors as essential elements in terming it as crime and giving a decision accordingly.

For example; if a man tries to threaten another person using a toy gun then no offense is committed; it lacks the certain arrangements or necessary means to perform.

X, on a grave and sudden provocation, fires a pistol at Y, under such circumstances that if he thereby caused death lie would be guilty of culpable homicide not amounting to murder. X has committed the offense as defined in this section.

Govind Ballabh and Bishan Singh were convicted under Section 147 and 308 /149 of IPC, in the group of 6 people there were only surviving. The plaintiff named Harish Bhatt was assaulted brutally with lathis by the offenders, they also stole his money, to save the plaintiff his brother named Ghanyashyam intervened and as a result, Harish Bhatt did not die but suffered severe injuries. This particular case was recorded under section 308 of the Indian Penal Code 1860.