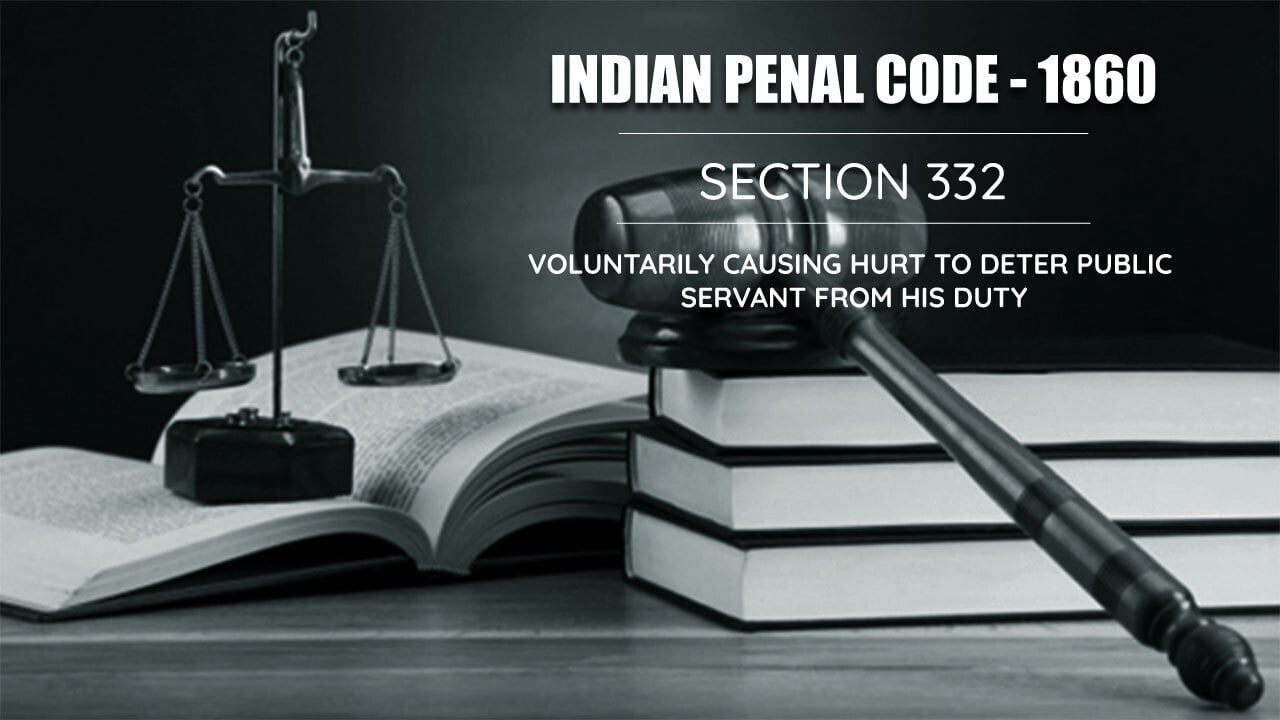 Chapter XVI of the Indian penal code deals with the offences harming the human body by causing hurt or grievous hurt. Section 319 to 335 provisions deals with hurt. In this article, we will discuss section 332, Overview, whether it is bailable, cognizable, etc.,

It talks about voluntarily causing hurt to deter a public servant from his duty. The section states that when any person causes voluntary damage or harm to a public servant at the time of his duty and has the intention of preventing the public servant is not performing the function. The hurt caused under section 332 is the same as discussed in section 319 of IPC, 1860 like slapping, punching, etc, which caused the public servant:-

For example- If A is a public servant and B is any person and B wants some information regarding the application or something if A doesn't have the knowledge and refuses to do so. Then B causes hurt to A, under this situation B can be charged under section 332 of IPC, 1860.

If a public servant comes to arrest and the person slaps in return or can cause discomfort then the person will be charged under section 332 of IPC, 1860. Because the public servant is performing the role of his duty.

The essential ingredients of section 332 are:-

Nature of the Offence:

IPC 332 can be tried in the court of Magistrate of First Class by the trial court- Court of a session. The concerned ministry will be the ministry of home affairs and the department is the department of internal security.

What is the Punishment for IPC 332 Case?

The commitment of offence under this section leads to imprisonment for three years or fine or both.

What is the process to file/defend your case for offence under section 332 of IPC?

Or else for more convenience E- FIR can be filed since Section 295 is a cognizable offence. Steps for filing E - FIR is as follows -

Note - Before submission all the details should be rechecked and ensure that the email id is correct as the FIR for future reference will be sent to this mail ID.

If any substantial evidence is found a charge sheet is prepared by the police.  After completion of the charge sheet, the matter is pursued as a trial in the court with the prosecution establishing the ingredients of section 332 and if successfully done then the accused may be imposed with imprisonment up to 2 years or fine or both depending upon the discretion of the court.

Why Lawtendo and how they can Help?

Through Lawtendo you can connect to an appropriate lawyer for filing or defending your case for the offence under section 332 of IPC. We, at Lawtendo provide around 15000+ lawyers all over the country on our online platform. Lawtendo strives to facilitate legal services that are based on low cost and quality legal service. Further, the lawyer will draft a petition for bail or for defending the accused in the trial, or on behalf of the victim can file a petition for proving the essentials of section 332 is violated.