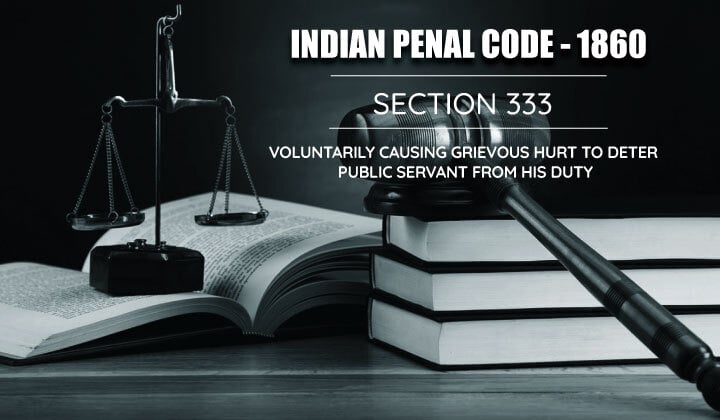 If held guilty of this, the accused who is held guilty can be held liable for a fine and be punished with imprisonment of either description for about a term which may go on to extend to ten years.

Offences that are considered Bailable according to law, in which there is a grant of bail and it is considered a matter of right, where the arrested person is released after the bail is granted, and in Offences that are non-bailable there is no grant of bail given, considering it a matter of right. It may be either given to a police officer who is having custody of the accused by the court. Section 333 of the Indian Penal Code is a non - bailable offence. Non - Bailable offences are comparatively more serious when compared to Bailable offences.

What is the punishment for IPC 333 Case?

If held guilty of Section 333 of the Indian Penal Code can be punished with imprisonment of either description for about a term which may extend to ten years, and shall also be liable to fine.

How to file or to defend your case for IPC 333 offence?

A capable lawyer will assist you and defend your case in either lessening the sentence of your punishment or by getting out of it.

Subhas Chandra Pratihar v. State of West Bengal and Others: The petitioner, in this case, is a medical practitioner who had joined the Health department of family welfare under the State of West Bengal on 24 of May 1973 and he was proclaimed as the Professor of Urology in the Institution of Post-Graduate Medical Education and Research situated in Calcutta. On the 12th of May, 1981 while he was following his routine of work as a Medical Officer (Surgeon) in the Hospital at when suddenly a group of hooligans under the arrangement, dictate and leadership of the accused herein entered into the same hospital and used extremely filthy language to abuse the petitioner without any instigation or validity of reason. The same people further went on to attack the petitioner as well, using fists, blows, and slaps causing extremely serious injury to the petitioner’s face leading to the dislocation of even a tooth of the petitioner. This resulted in him becoming senseless because of the injuries, and it is only due to the intervention from the staff that he was alive. The Petitioner soon registered a complaint against them under Section 147, 332, 153, 448, 333, and 120-B of the Indian Penal Code. Upon completion of the investigation, it was rightfully observed by the Honourable Court who also earlier observed that it will be for the Sessions Court to make a decision over the materials which are on record, on whether it will be a case under Section 333 or 332 of the Indian Penal Code. was made out. The Court gave judgment favoring the judgment given by the Trial Judge who it was emphasized acted within the ambit and scope of the matter and there was no breach seen of the earlier order or spirit of the order passed by the Honourable Court and since this has held to have no illegality there was assumed to be no ground to interfere with the impugned order passed by the learned trial Judge. So, the application under Section 401 accompanied with Section 482 Cr.P.C. was held to be dismissed.

P.Balaraman v. the State: The judge in this case with clear knowledge of the documentary evidence found and comprehended had held the accused guilty of the three charges that were filed against him by the petitioner. But the point to reconsidering this was the point that deserves consideration in this appeal was the question of if the prosecution had established the guilt of the appellant beyond a reasonable doubt. The counsel who appeared for the appellant had contended that the trial Court that the Assistant Sessions Judge did not hold the authority to impose a sentence of eleven and a half years. The entire judgment was vitiated, emphasizing it being set aside.

He further in his contention went on to elaborate that the compartment in the train can never be construed as a building used as a human dwelling or a place of worship or a place for the custody of the property and that it cannot be deemed to be the property in the possession of Petitioner 1 to even primarily attract the ingredients of section 452 under IPC. In respect of the offence under Section 333 of the Indian Penal Code, he went on to state that the public servant was not attacked in the discharge of his duty as such public servant or with any prior intention to prevent that person or any other public servant from discharging his duty as such public servant an.d, therefore, the prosecution had not established the offence under this section as well.